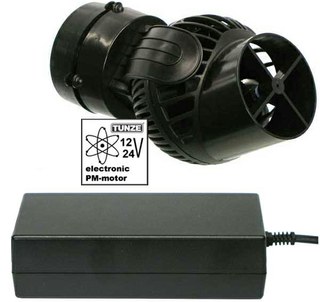 The 6155 will replace the 6205 model.  The 6305 is also being discontinued and will be replaced by an even more powerful model with over 6,000gph of flow and higher velocities at greater distances.  Essentially, the 6155 is designed to meet the needs of current 6205 and 6305 users, and the 6305 replacement will fill a new market segment.

The 6155 features a front housing more like the 6305 than the 6205 in order to improve flow output.  Notice the more widely spaced grills and the wide nozzle.

The retail box shows the 6155 can operate between 12 and 24 volts like the new generation 6105.  As current Stream owners already know, users are able to swap out the jumper on their power supply to increase or decrease their Stream’s maximum output.  Higher voltage jumpers increase maximum flow rates but will naturally consume more power and increase noise levels.

The Stream 6155 is anticipated to ship towards the end of November 2011.