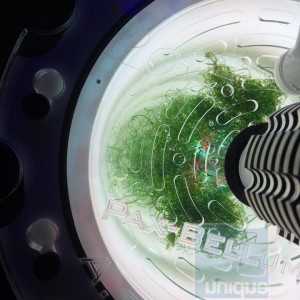 Update 2: In trying to understand the price increase of ARID reactors, I reached out to Pax Bellum directly. I was told that the N12 has been replaced with the N18, which includes a heat pipe, improved heat sink and light cover. However, when I inquired why the reactor prices increased so dramatically (as I noted before, nearly doubled) Pax Bellum explained that they are not allowed to undercut the price set by their distributors. Those distributors are Unique Corals, Manhattan Aquarium and Pop Corals.

Update: I am told that Unique Corals didn’t raise the price of Pax Bellum’s ARID reactors, but the increased price was set by the manufacturer. The reactors can still be bought direct from Pax Bellum, but are sold at the new (higher) prices, quoted below in this post. I am still unsure why the prices of the ARID reactors have risen so dramatically. In November of 2015, they could be bought for nearly half of what they are sold for now, for what I was told was the Manufacturer’s Suggested Retail Price (MSRP). The reason price is a focus of my discussions on the ARID reactors, is that many aquarists have told me that while they find these units intriguing, the price makes them unrealistic for them, especially since other algae scrubbers can be bought, or made, for far cheaper.

15-20 years ago, algae scrubbers were all the rage. We knew that nitrates were bad news in a reef tank, but many of the current methodologies for assimilating them had not yet made an appearance. Bio-plastics (bio-pellets) had not been invented, sulfur based de-nitrators weren’t offered for reef aquariums, and zeolite had yet to cross over to aquarium keeping. Refugiums existed on a few tanks, but back then wet/dry filtration (a dreaded nitrate sink) was still popular. We had mastered the ammonia cycle, and much of aquarium filtration was aimed at keeping ammonia and nitrite, out of reef aquarium water. Many tanks had algae scrubbers, and I personally had a large homemade scrubber that included several feet of plastic mesh, along with a couple hardware store lights. It was most certainly a fire hazard, but it was semi-effective.

Since the good old days, I’ve used a host of algae scrubbers. Some were large homemade units, while others were compact manufactured units. Algae scrubbers exist that float on the water’s surface, magnetically attach to the tank’s sides, and connect to the aquarium a variety of ways. What I always found, when using an algae scrubber, was that I got a lot of algae growth, but may tank always carried a measurable nitrate load. Often this exceeded 5 ppm of nitrate, even though algae was growing at a rapid pace. Since then, I’ve abandon algae based nutrient assimilation, in favor of bacterial nutrient assimilation. In my experience, microbes are far more effective at breaking down nutrients, than algae. Pax Bellum has just released the ARID reactor, what is promised to be a super-charged way at growing macro-algae, capable of providing the aquarium with all its filtration needs. After contacting Pax Bellum, I began remembering my experience with algae scrubbers in the past. According to Pax Bellum, the ARID reactor is all the filtration you’ll ever need, eliminating the need for protein skimming, carbon dosing, GFO and even ozone. With a $ 749-dollar price tag, the ARID reactor costs almost as much as other filtration items combined, but is it possible that algae alone, can purify reef aquarium water? 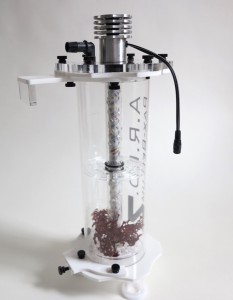 ARID looks like a regular reactor. There is simply an inlet for water to enter, and an exit for it to flow back into the tank. The difference is the center column, housing what Pax Bellum calls a light pole. This is a cylinder, running the entire length of the reactor, which houses LED lights. Instead of lighting the scrubber from the top down, the ARID provides light throughout the whole circumference of the reactor. This means that the entire mass of algae has powerful light. The result is a super-charged way of growing macro-algae, meant to maximize nutrient export. Pax Bellum believes that this design will allow a lot of nutrient removal, in just the small space of a reactor.

However, the $ 749 price tag, is enough to make many reef keepers look twice. Especially since, on the surface, the ARID looks much like any other reactor. Santa Monica Filtration is famous for making the Surf and Hog algae scrubbers. The surf floats on the sump’s surface, while the hog attaches to a sump wall. The surf and hog use a patented surface to grow algae, and have a clip in top, filled with red LED lights. Santa Monica’s devices can be had for around $ 200-400 dollars. What’s more confusing, when the Pax Bellum reactors first debuted, reef keepers could order them directly from the manufacturer. The price for the ARID C12, directly from Pax Bellum, was $ 279.00, and the popular C18 could be had for around $ 399. Since then, California based Unique Corals has become the official distributor of Pax Bellum reactors, and the price has skyrocketed. The $ 279.00 ARID N12 runs $ 449.00, and the $ 399.00 C18 is $ 749. You could nearly buy two ARIDs at Pax Bellum’s price, for the cost of one via Unique Corals. It also appears that Pax Bellum is no longer taking direct orders from aquarists. 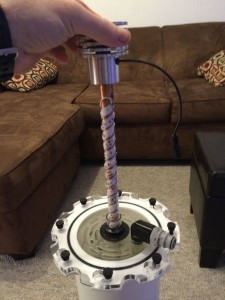 So what’s to stop an average, DIY inclined aquarist, from building an ARID style reactor themselves. Well, it turns out, nothing. Reef keeping forums are littered with homemade ARID reactors. Some take Two Little Fishies reactors, and wrap them in bright LED rope lights. Where the official Pax Bellum product has an edge, is in the LED technology packed into it. Pax Bellum incorporates a vapor heatsink tube. The LED lights fit into a quartz sleeve, isolating them from harsh saltwater, much the same way a UV sterilizer bulb is isolated. The LED lights are wrapped around a copper tube, which functions as a heat sink. The copper pipe is sealed in a vacuum, with a small amount of vaporized fluid. This creates a very innovative, and reportedly effective way to manage the localized heat produced by LED lights. It’s also the type of innovation that is almost impossible to implement on your own, truly making ARID reactors a one of a kind innovation.

While $ 749 is a lot for any kind of reef filtration, the ARID reactors super-charged approach to growing macro-algae creates a replacement for other, far more finicky filtration options. Quickly growing macro-algae can aid in removing yellowing compounds in water, resulting in crystal clear h20. Naturally, nutrient reduction is the largest benefit of this system, but ph stabilization and oxygenation are other fringe benefits, provided by photosynthesis.

Pax Bellum also recommends dosing the ARID with a mixture of micro-nutrients to jump start the growth of macro-algae. It seems a bit counter-productive to dose nutrients into a reef tank, where you’re trying to assimilate them, but according to Pax Bellum, this is an important step to making the ARID fully effective. 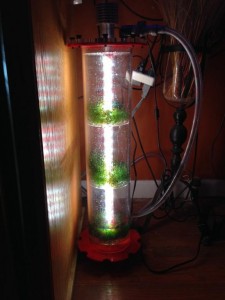 There is nothing overtly technical or ground-breaking about algae scrubbers. Light, water, algae, it couldn’t get more basic. However, the ARID combines new lighting and heat management technology, to put a new spin, on a well-established form of filtration. It’s sort of like taking an old 1960’s engine, fitting it with a turbo-charger and making it far more efficient as well. Core principles of an effective system are there, now just pour some gas on the fire.

For me personally, I’ve invested a lot of time (and money) into microbial de-nitrification systems. This includes the use of both zeolite and sulfur based bacterial de-nitrification. It’s working well, and has for several years, so the thought of removing all that progress from my tank, and going an entirely different route is hard to justify. Although, bacterial de-nitrification is complicated. Zeolite requires precise measurement of water flow through the reactor, while also paying close attention to dosing specific additives. Sulfur based de-nitrification, even bio-plastics are not for everyone, and come with their own inherent risks and consequences. For the masses, and aquarists really looking for a simple, one size fits all solution to excess nutrients, the ARID may pose a real effective option. I just wish that upon taking over distribution, Unique Corals had not nearly doubled the cost of these reactors. At the prices Pax Bellum was once selling them for, the ARID reactors weren’t just an innovative de-nitrification option, but a value as well. Now, at $ 449 and $ 749, they better damn well work.