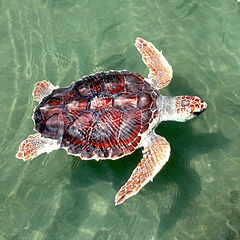 Five decades of conservation sees the loggerhead turtle population on the South African east coast recovering nicely.  The leatherback population, although small, remains stable.  This is the good news from the annual season report.

Other findings were that female loggerheads are getting smaller over time.  This forces eggs and hatchlings to reduce in size over time and thus overall hatching and emergence success is reduced.  The majority of loggerhead hatchlings are female though and this helps the recovery of the population.

The monitoring programme is maintained by Ezemvelo KZN Wildlife with support from Oceans and Coast (government Department of Environmental Affairs) and the iSimangaliso Park Authority, but without the help of the coastal aquaria and the KZN Sharks Board, important data would be missing. The Sharks Board reports on turtles caught in the nets whilst aquarium staff report and rehabilitate stranded turtles and if an animal cannot be released, it’s given a home. 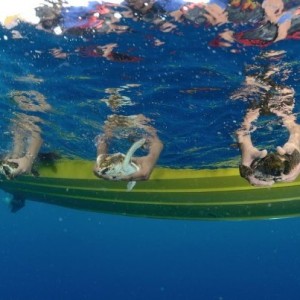 Green turtle hatchlings strand in the Eastern Cape where Bayworld staff collect and rehabilitate them, whereas Loggerhead turtle hatchlings strand down in Cape Town where the Two Oceans Aquarium staff collect them, start the rehabilitation process and then send them up the coast to uShaka Marine World to get big enough for release in the warmer east coast waters.  A total of 38 turtles were stranded and rehabilitated in 2010/2011.