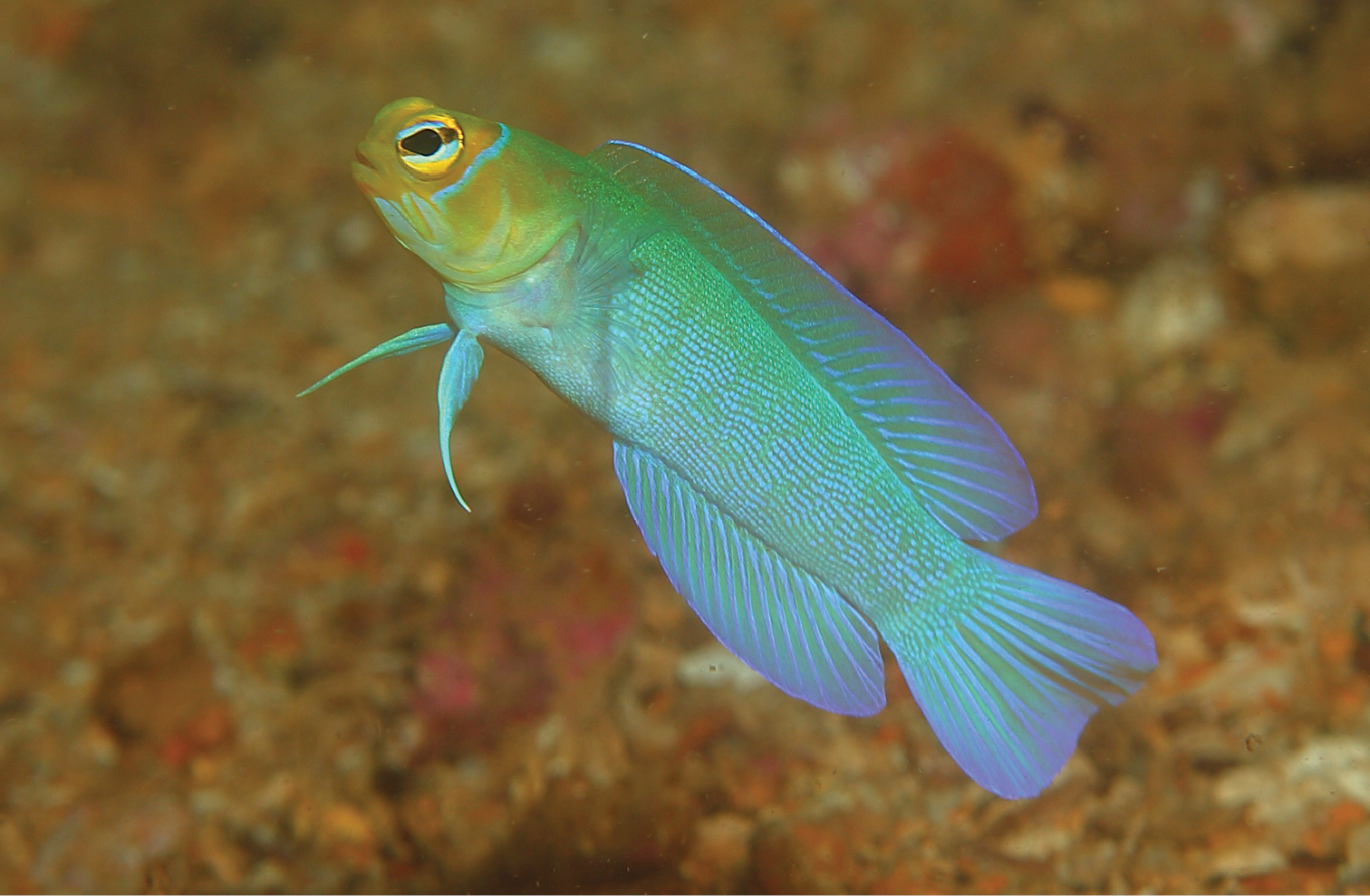 The coral reef fauna of Brazil is home to many endemic fish species, most of which find their closest relatives further north in the Caribbean. A classic example occurs with the Royal Gramma (G. loreto) and the Brazilian Gramma (G. brasiliensis), whose distribution in the West Atlantic is divided neatly by the barrier formed from the Amazon and Orinoco river deltas. A similar (but less tidy) comparison can be made with the little blue and orange Centropyge here, split neatly into the Cherubfish (C. argi) in the north and the Flameback Angelfish (C. aurantonotus) in the south, with a small area of overlap at places like Aruba, Curacao, and Barbados.

In a study recently published in the journal ZooKeys, researchers have described two new species of jawfish that illustrate this same biogeographic phenomenon. Unlike the colorful examples in Gramma and Centropyge, these new jawfishes are fairly drab and easily confused with their sister species in the Caribbean. It was only with careful morphological and genetic study that their uniqueness was finally confirmed.

The newly recognized Brazilian Dusky Jawfish (Opistognathus vicinus) is nearly indistinguishable from the true Dusky Jawfish (O. whitehursti), a species commonly seen in the aquarium trade; however, they are every bit as genetically distinct from one another as other recognized taxa in this genus. To tell them apart in life, the adults are more strongly banded in O. vicinus and with a better developed dorsal fin spot, to go along with some minor differences in their jaw structure and dentition.

Thiony’s jawfish (O. thionyi) is a poorly known new species that has thus far only been encountered at three widely distributed oceanic islands off the Brazilian coast: Trindade Island, Dogaressa Seamount, and Fernando de Noronha Archipelago. This is the sister species to the Caribbean’s Mottled Jawfish (O. maxillosus) and differs in having the spot of the dorsal fin positioned slightly further back, as well as having a greater number of scales. It is named in honor of the late Brazilian ichthyologist Thiony Simon, who tragically died during a dive accident while exploring the mesophotic reefs of Brazil in 2016. Thiony was a talented young researcher, just 30 years of age when he passed, whose work examined the unique fauna of these isolated reef systems. His efforts led to the discovery of several new species, including another Brazilian endemic that bears his name, Thiony’s Goby (Pinnichthys aimoriensis).

6 years ago I was surveying Trindade Is, 1200 km off mainland Brazil, with my great friend, the late Thiony Simon. He showed me an undescribed jawfish he had found. It's just been named in his honour by Smith-Vaniz, Tornabene and Macieira! @FishEvoLukehttps://t.co/r8r3AddamB pic.twitter.com/lP3vydHpxs

Lastly, a word needs to be said on the Yellowhead Jawfish (O. aurifrons). In the aquarium trade, this is by far the most popular of the West Atlantic jawfishes, most of which are collected from the waters around South Florida. Here, this species sports a colorful yellow head, but specimens originating elsewhere in the region can appear dramatically different. For example, specimens observed in the Bahamas can have a drably colored head and prominent black marks on the throat (a trait never observed in the Floridian population). These differences even led to the description of a separate species in 1934, Gnathypops bermudezi, which was later synonymized.

This throat patterning is something that would be highly visible among these burrow-dwelling fishes and is likely used in species recognition. A 2012 study by Ho et al. compared the differences (both morphological and genetic) within this species across four locations and found some evidence for localized speciation. The greatest disparity comes when comparing specimens in the north (Florida, Bahamas, USVI) with those from reefs in the southern Caribbean and Brazil. This southern population, referred to in field guides as the Bluebar Jawfish, is visually distinct in having a thin blue stripe behind the eye and typically has 17 (vs. 16) vertebrae.

But things might be far more complicated, with new genetic data suggesting that there might actually be three separate subpopulations in the southern portions of the West Atlantic. These can be divided into those from the Southern Caribbean (Curacao, Aruba), those from Brazil, and a third at the remote Fernando de Noronha Archipelago, a region known for its high rate of endemism. This latter population is further distinguished by having shorter pelvic fins and by lacking the blue bar found in the main Brazilian population. Confusing things further, there is apparent overlap or hybridization taking place at Aruba between this unnamed southern population and those to the north, similar to that seen in the Centropyge example mentioned previously. 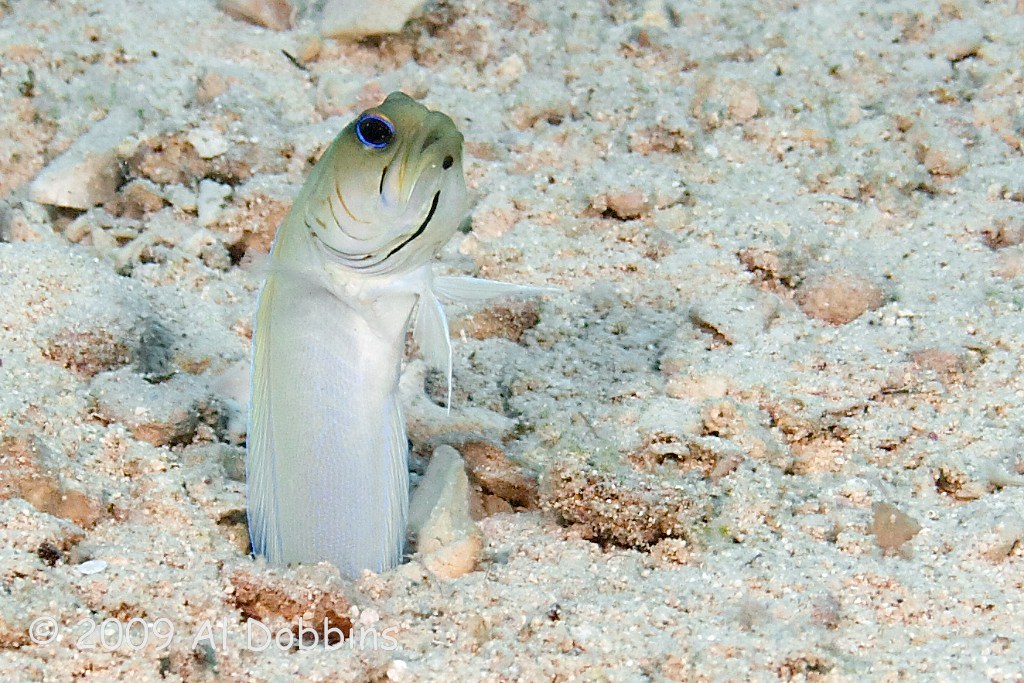 So exactly how many species are there lurking within the Yellowhead Jawfish? The type locality (and thus the true O. aurifrons) is in South Florida, but there’s reason to believe that this is the only place where this fish occurs. With further study, what was once one might eventually become many. It’s not hard to imagine that there may be a speciose complex of largely allopatric species here, similar to what we see with some of the hamlets and gobies in this region.

Here’s another jawfish video, this time from the Cayman Islands. The black throat markings can vary from two small dots to specimens with a pair of prominent exclamation marks running down the throat. The second video is of an unusual aquarium specimen in Europe that presumably didn’t come from Florida.