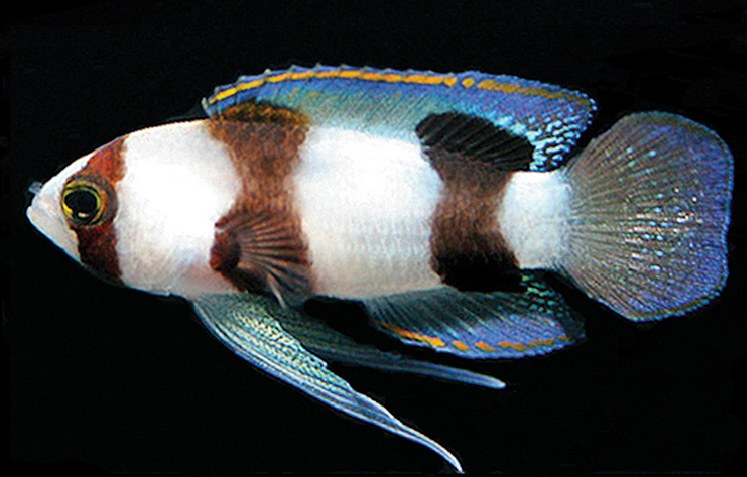 L. levinsoni is described as having wider vertical bars than L. evides (pictured right).  Based on this morphological distinction, some of the banded basslets that have entered the aquarium trade may actually be L. levinsoni instead.  Genetic analysis and counting the number of gill rakers fin rays can better reveal the differences between the two species.

The second new deepwater basslet described this week is Lipogramma haberi (pictured below).  These are also extremely deep-water fish being found at 152–233 meters.

Both species are described in ZooKeys.

Don’t judge a book by its cover

Interestingly, while L. levinsoni bears a striking resemblance to L. evides (the two were thought to be the same until 2016), phylogenetic analysis suggest this new species is more genetically related to Lipogramma anabantoides, which inhabits depths < 120 m.

However, the dissimilar-looking L. haberi is shown to be a closer genetic kin to L. evides.  Both L. haberi and L. evides inhabit reefs deeper than 150 meters, whereas, L. levinsoni and L. anabantodies inhabit shallower reefs.  This suggests that depth plays a major role in the evolution of these fish.

Exploration of mesophotic Caribbean reefs have discovered a treasure trove of potentially new reef fish species.  There is little doubt many more new species will be described in coming years.