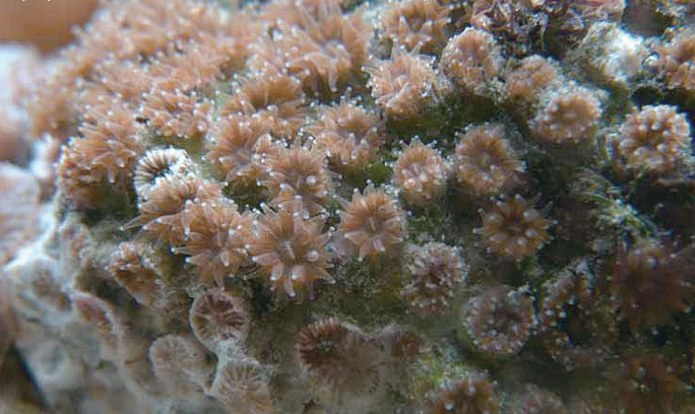 
The findings were published in the January and February 2012 issues of Zoological Studies by an international collaboration of researchers from Australia, Brazil, Japan, Kenya, and Taiwan.

Polycyathus chaishanensis sp. nov. (pictured at top) is a small encrusting coral that lives in colonies with others of its species. According to the species description when the corla is “expanded, vivid-red to brown polyps rise considerably above the calice, and long and slender tentacles are covered with white nematocyst batteries. Polycyathus chaishanensis is the only species of Polycyathus known from Taiwanese waters and appears to be endemic to a small region at Chaishan, [Taiwan].”

Pictured at right, Pseudosiderastrea formosa is only the second coral added to the Pseudosiderastrea genus since the first was found in 1935 off the coast of Papua New Guinea and Australia. It reportedly “lives on rocky substrates where it forms encrusting colonies … [and] it may co-occur with Pseudosiderastrea tayamai” the only other coral in this genus.

As mentioned, the location of both of these corals makes them highly susceptible to human disturbances like construction and pollution from urban and agricultural runoff. The Takao Hill Association has urged the Taiwan government to contact the International Union for Conservation of Nature and Natural Resources (homepage, Wikipedia) in order to get them listed as “endangered.” This would allow the government to obtain additional financial resources for their protection.