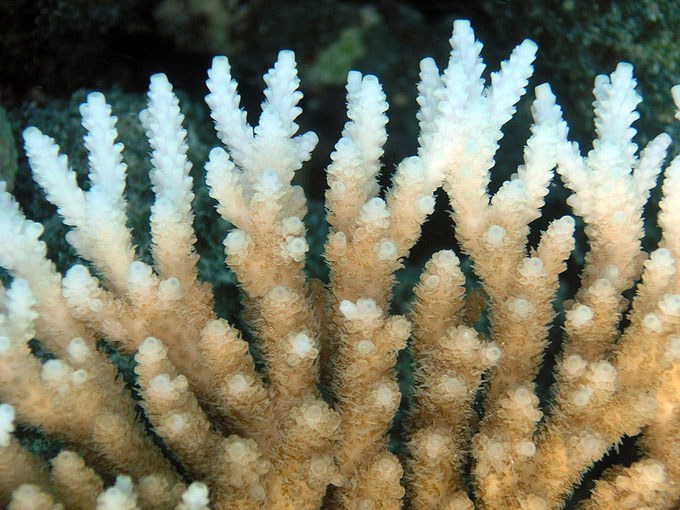 The white tips on this coral are a reflection of “bleaching” and declining coral health. (Photo courtesy of Oregon State University)

Scientists have discovered two viruses that appear to infect the single-celled microalgae that reside in corals and are important for coral growth and health, and they say the viruses could play a role in the serious decline of coral ecosystems around the world.

These viruses, including an RNA virus never before isolated from a coral, have been shown for the first time to clearly be associated with these microalgae called Symbiodinium. If it’s proven that they are infecting those algae and causing disease, it will be another step toward understanding the multiple threats that coral reefs are facing.

The research was published today in the ISME Journal, in work supported by the National Science Foundation.

“We’re way behind in our knowledge of how viral disease may affect coral health,” said Adrienne Correa, a researcher with the Department of Microbiology at Oregon State University. “If viral infection is causing some bleaching, it could be important in the death of corals and contribute to reef decline. This potential threat from viruses is just starting to be recognized.”

Corals co-exist with these algae in a symbiotic relationship, scientists say, in which the algae provide energy to the coral, and contribute to the construction of reefs. The coral in turn offers a place for the algae to live and provides nutrients for it.

Corals and viruses have evolved along with their resident algae for millions of years. They have persisted through previous climate oscillations, and the presence of viruses within corals or their algae doesn’t necessarily indicate they are affecting coral colony health. If viruses are causing disease or bleaching of colonies, it’s also unknown whether this is happening now more than in the past.

“Corals are known to face various environmental threats, such a warming temperatures, competition and pollution,” Correa said. “Some of the environmental changes of the past were likely more gradual and allowed the coral and its associates more time to adapt.

“The stresses challenging coral reefs now are more intense and frequent,” she said. “This may mean viruses cause more problems for corals and their algae now than they did historically.”

In continued research at OSU, scientists will inoculate Symbiodinium with the viruses and try to prove they are causing actual disease. If the viruses are killing the algae, scientists said, it could have significant implications for coral reef health and survival. There are almost two dozen known diseases that are affecting coral, and scientists still do not know the cause of most of them.

Coral abundance has declined about 80 percent in the Caribbean Sea in the past 30-40 years, and about one-third of all corals around the world are threatened with extinction.