Is there an Undescribed Clownfish in the Great Barrier Reef? 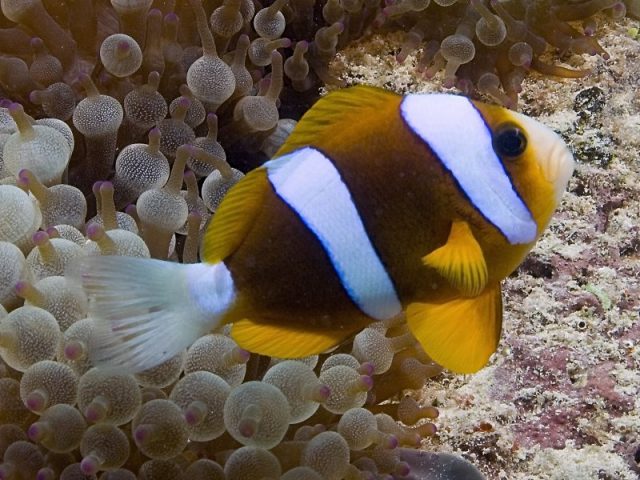 What is this fish? From Cairns, Australia. Credit: Nautilus Scuba Club

This week I’ve been highlighting some of the more unusual populations of anemonefishes in the Amphiprion clarkii complex, each of which is probably deserving of species recognition. So far, we’ve looked at the Ogasawara Black Anemonefish, Amphiprion snyderi, with its unique melanism and highly restricted distribution near Japan, and the Chagos Clark’s Anemonefish, which has long been confused with the sympatric Amphiprion chagosensis. For the final installment in this series, let’s journey to one of the most heavily studied marine ecosystems in the world to find our next new species.

To begin this discussion, we need to first examine the so-called Barrier Reef Anemonefish (Amphiprion akindynos). It was described more than four decades ago by the world’s authority on damselfishes, Dr. Gerry Allen, with the type specimens originated from One Tree Island in the Capricorn Reefs. The species can be diagnosed by: 1) a white caudal fin 2) a dull, brownish coloration 3) relatively thin white stripes, disconnected dorsally. Since then, this fish has been found nearby in New South Wales, along with a disjunct population (itself likely to be another undescribed species) in New Caledonia, the Loyalty Islands and Vanuatu. 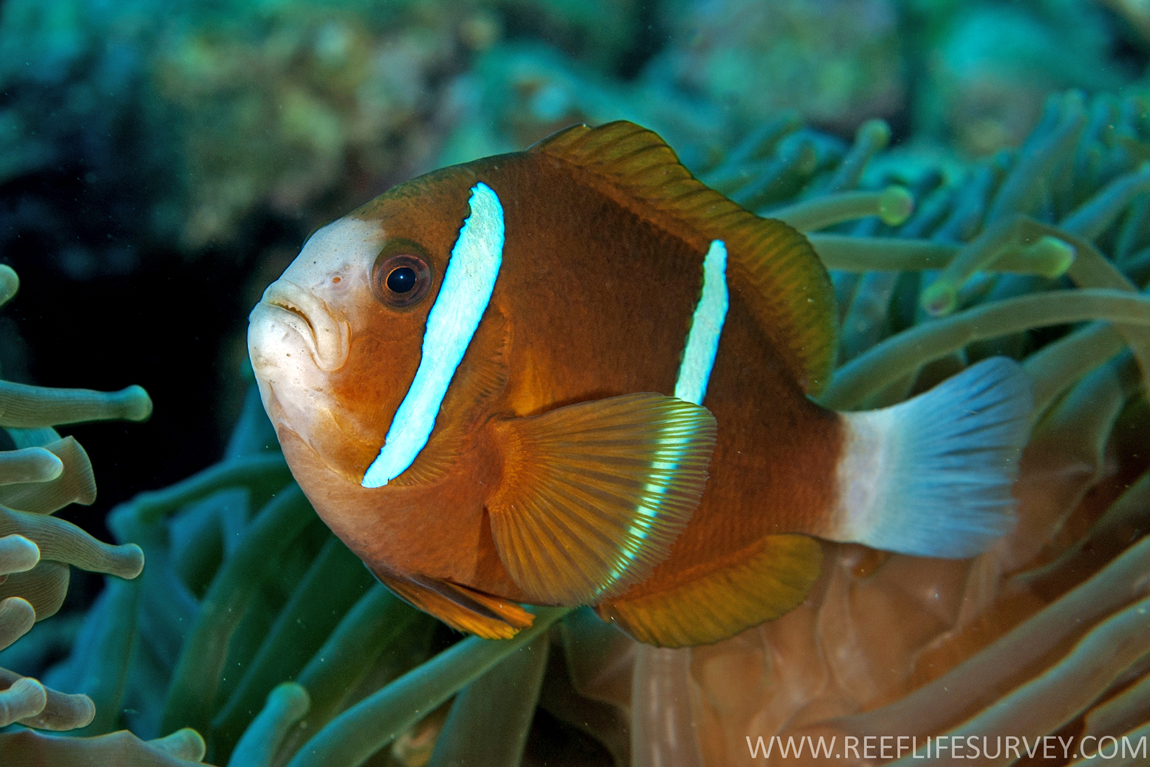 Genetic studies have shown a close and complicated relationship between A. akindynos and A. mccullochi, a rare species which only occurs in the reefs near Lord Howe Island. The main distinguishing features associated with that taxon are its black coloration and the absence of a middle stripe. However, occasional specimens have been observed at the South Solitary Islands which feature the brown coloration of A. akindynos paired with the single stripe of A. mccullochi, somewhat blurring the lines which separate these two. Along with the A. cf akindynos from New Caledonia, these three fishes appear to form a distinct subtropical lineage within their genus, perhaps analogous to certain other reef fishes in this region (e.g. Cirrhilabrus laboutei, Chaetodontoplus conspicillatus).

But when we venture further north into the Great Barrier Reef proper, we find an altogether different fish, albeit, one which is only subtly different from the true A. akindynos. It can be recognized on account of its much wider stripes, particularly the anterior one, which tends to broaden dorsally where the two sides connect above the head. The colors also tend to be a bit more vibrant in this fish. Rather than the dull, earthy brown of A. akindynos, this northerly population usually has a bright orange belly and fins. This fish is particularly abundant around Cairns and surrounding areas, but records exist further north into the Torres Strait and south to at least Townsville. There are also images from some of the offshore reefs of the Coral Sea, such as Osprey Reef. 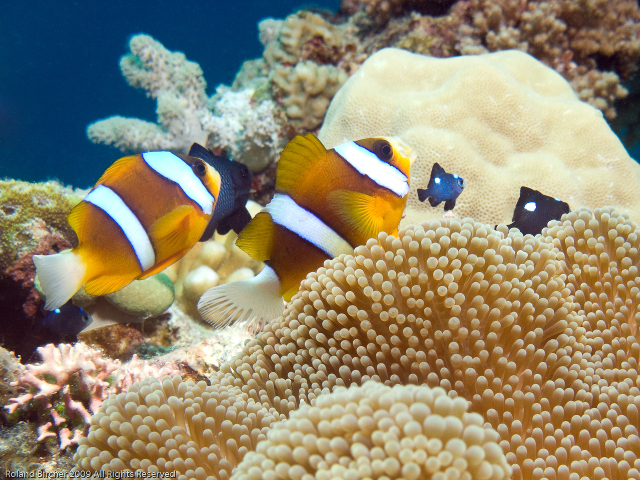 Nearly every specimen from the Northern Great Barrier Reef looks like these specimens. Credit: Roland Bircher

We can infer that this fish is likely a member of the widespread Indo-Pacific Amphiprion clarkii complex. This group is ubiquitous throughout the Indo-Australian Archipelago and harbors many unrecognized species. However, there is a noteworthy absence from Eastern Australia, one which makes little sense for an anemonefish that is both geographically ubiquitous and ecologically generalist. But aside from the white caudal fin and the lack of a melanistic form (a trait also seen in the Chagos A. cf clarkii), there isn’t reason to exclude this Great Barrier Reef population from the clarkii complex.

There are occasional examples of the true A. akindynos with relatively thick and fully connected stripes (though these specimens still tend to appear dull in coloration), and there are also specimens presumed to be the undescribed A. cf clarkii that have thinner stripes that connect unevenly above the head. What we might gather from all this, especially given their close proximity to one another, is that these two species have interbred extensively at various points in their evolutionary histories, exchanging genes to the point that they now appear almost identical. There are even photos of what is likely a mixed-species grouping observed in the Capricorn Reefs, with a single of the A. cf clarkii phenotype cavorting about with multiple A. akindynos, indicating that this piscine miscegenation may yet be ongoing.

If this seems speculative or far-fetched, recall the same sort of phenotypic convergence has plausibly taken place at the Chagos Archipelago. Given the broad host preference for anemones seen in the clarkii complex, we often find them coexisting peacefully in the same anemone with other species, providing a mechanism which could encourage two small, isolated populations to regularly interbreed. What we may be witnessing with this pair of Australian clownfishes is an incomplete example of hybrid speciation. Without extensive research into their population genetics, it would be hard to know which way they are heading. If we looked into the future, would we find a single homogenous population or would there be two increasingly distinct species? This is a fascinating evolutionary question in need of answers.

Below, you’ll find an extensive visual catalog illustrating the variety found in both of these fishes from across their ranges in Australia. 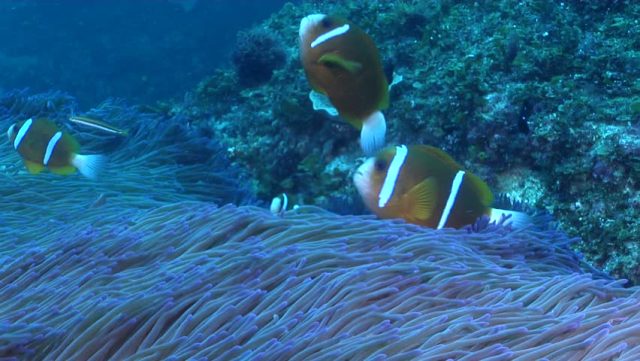 This aberrant A. akindynos illustrates the clear similarities with A. mccullochi and might even be a true hybrid. A similar specimen can be seen in the video below. Credit: unknown 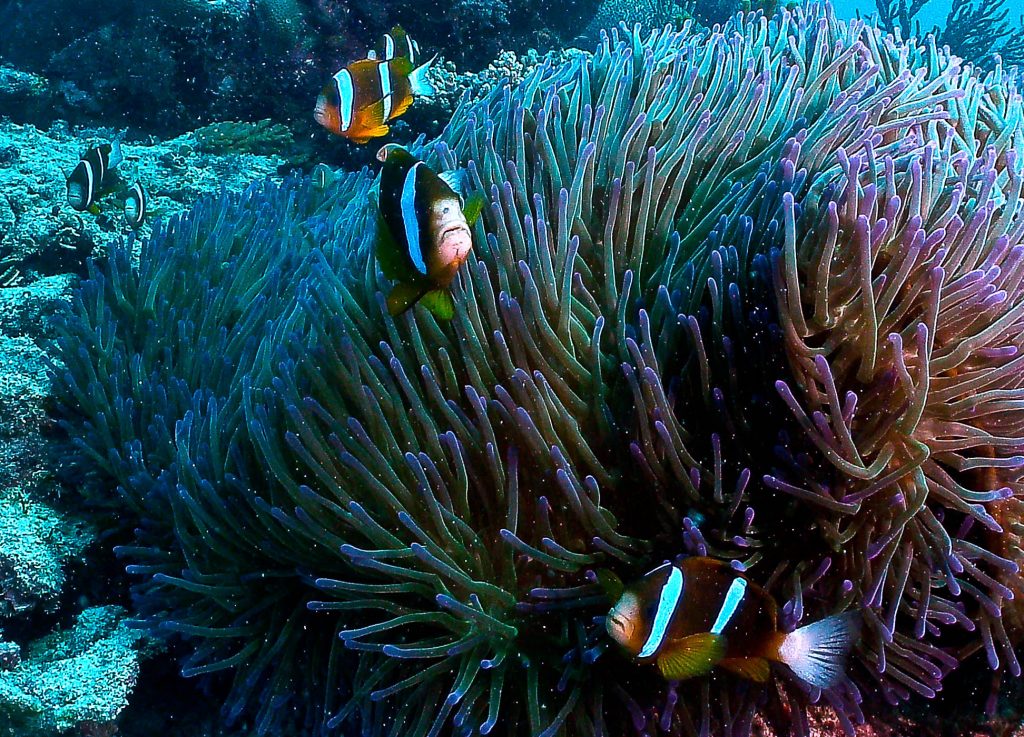 The specimen in the upper-middle appears to be A. cf clarki, while the others are closer to A. akindynos. Observed at Heron Island, in the Capricorn Reefs where the latter species was described. Credit: Bill 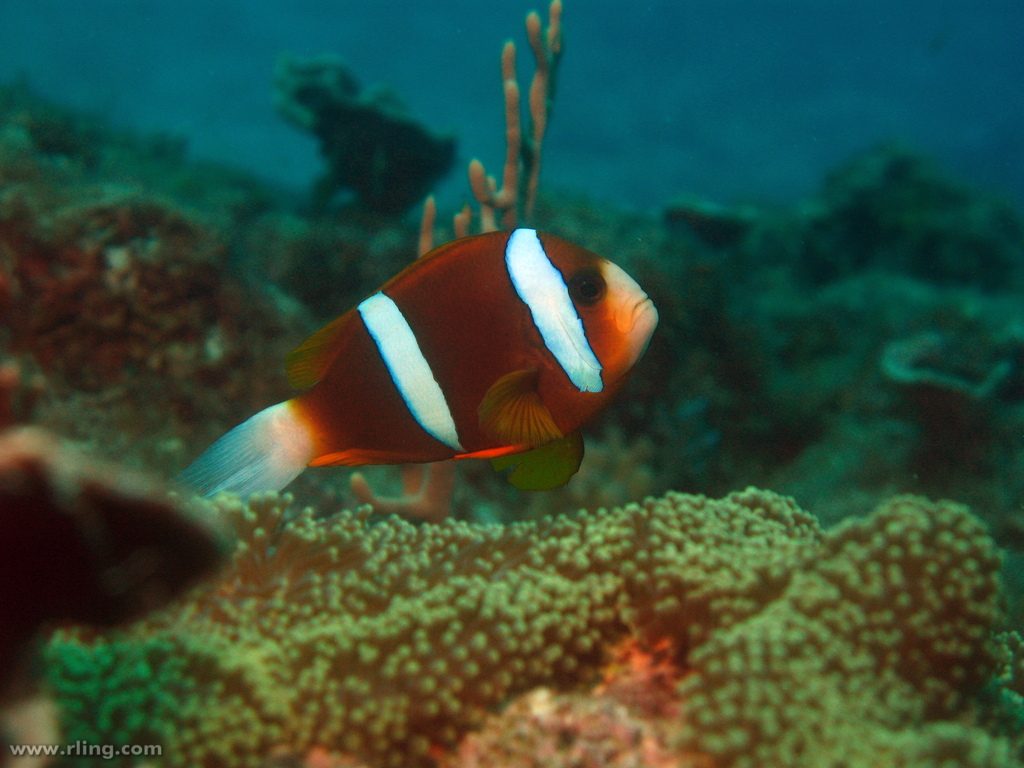 This unusual specimen from Yankee Reef (located in the middle of the Great Barrier Reef) is intermediate in appearance, with relatively broad stripes but a dull brown color. Might this be a hybrid? Credit: Richard Ling

The next video is from Heron Reef, located roughly where the southernmost reefs of the Great Barrier Reef meets the Capricorn Reefs, and shows several specimens that appears somewhat intermediate in their phenotype, but all of which clearly lean more towards the A. akindynos side of the spectrum. 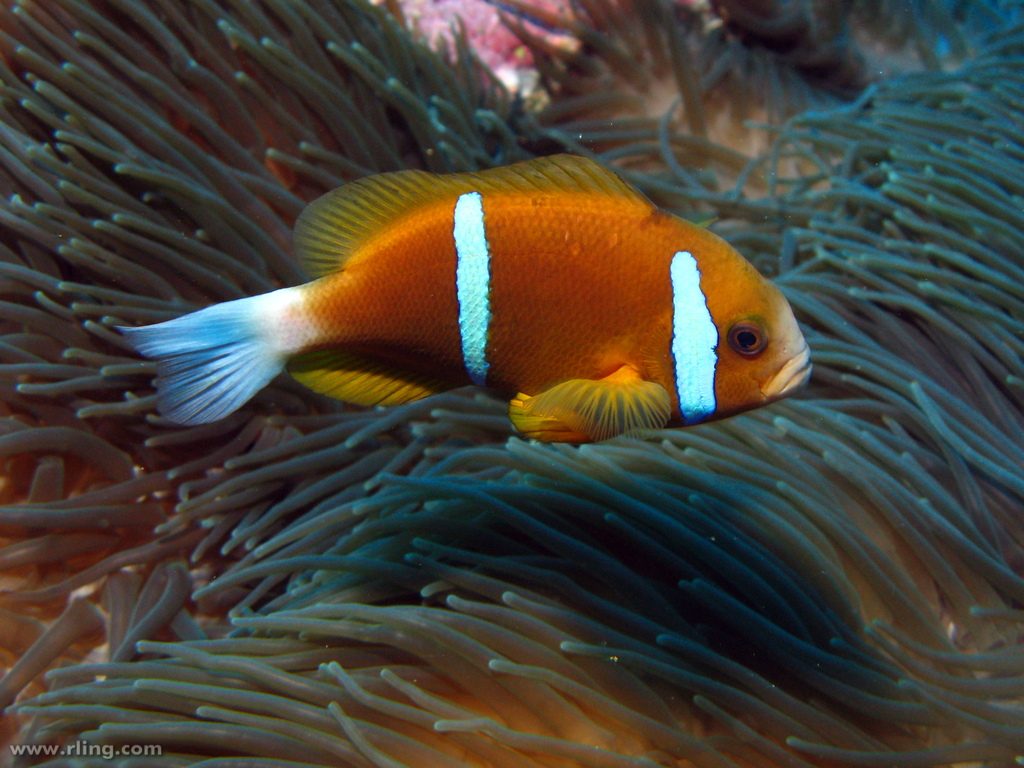 The next video was taken at Flinder’s Reef, an oceanic reef situated roughly in the middle of where these two species’ main populations seem to reside. Unsurprisingly, this pair appears to be roughly intermediate in appearance, though other videos show that the more typical A. akindynos phenotype also occurs here.

But, as the next photo and video illustrate, we still find the A. cf clarkii phenotype present at roughly this same latitude along the Great Barrier Reef near Townsville. 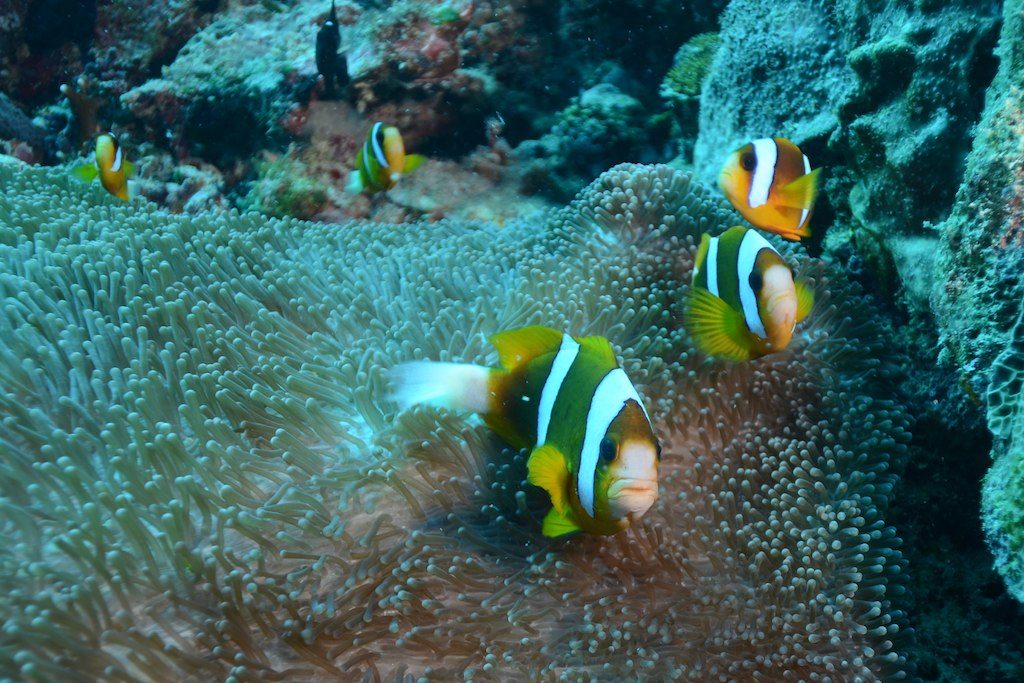