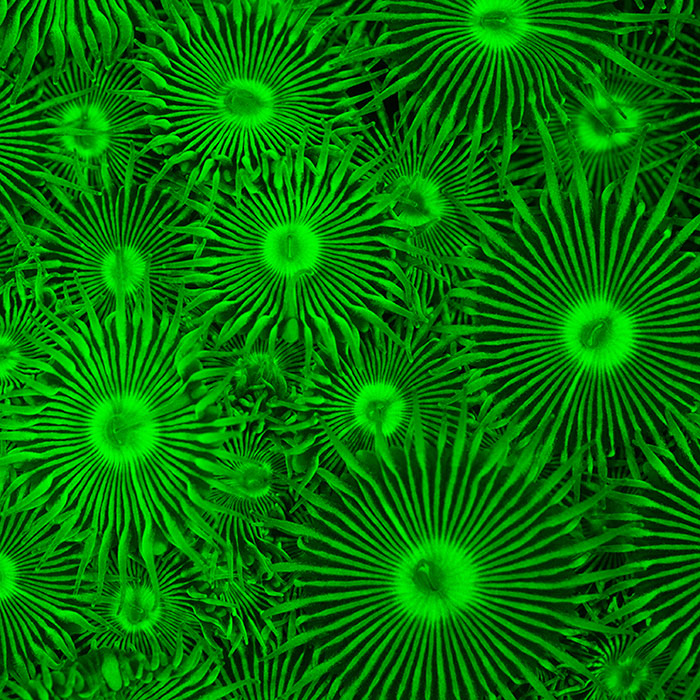 Undescribed fluorescent Palythoa species photographed along the shoreline of PortMiami.

We are happy to announce the publication of a scientific paper analyzing the presence and potency of palytoxin (PLTX) in Palythoa spp. and Zoanthus spp. Zoantharians conducted by the Mediterranean Institute of Oceanography and Coral Biome in Marseilles, France. PLTX is one of the most potent toxins known on the planet. It is an extremely large and complex organic compound that has been described by biochemists as the ‘Mt. Everest of organic synthesis’. An organism that naturally produces large amounts of PLTX is of great importance for research scientists to better understand its pharmacology. PLTX has been found to have toxic effects on head and neck tumors, and therefore warrants further pharmaceutical investigation.

Initially, this compound was blue-prospected in Hawaii where native Hawaiian people used the the mucous of Palythoa found in a very specific (and taboo) tide pool (known as limu-make-o-Hana, the ‘seaweed of death of Hana’) to coat their spear points before battle. So taboo was this tide pool for outsiders, that when scientists sampled the Palythoa in 1961, they found their lab burned to the ground on the same day. A reminder to scientists to respect native wisdom, culture, and practices when performing science on other cultures’ land!

In this paper we found that an undescribed species (Palythoa aff. clavata) we sampled from PortMiami in 2012 was found to have five times the concentration of the notorious Hawaiian species Palythoa toxica. The experiment also tried to determine whether PLTX was produced by symbiotic microbial symbionts / zooxanthellae, or by the organism itself. Highest concentrations of PLTX were found within the tissue itself, and isolated cultures of zooxanthellae from these polyps failed to produce PLTX in the laboratory. This suggests, but does not confirm, that the Palythoa polyps themselves are producing this toxin. While the mechanism of its biosynthesis remains unknown, it highlights how Miami’s urban marine environs hold important scientific discoveries still waiting to be uncovered.