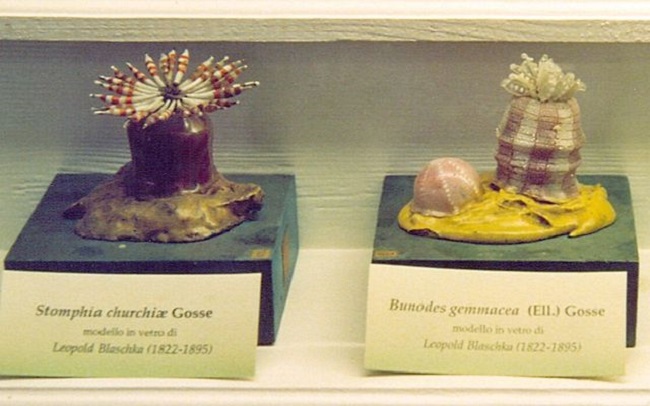 Just about everyone wants to save the whales. Sharks get a whole week to themselves. The simple fact is, concerning the marine environment, it is the megafauna that gets all of the attention. Not to say that the attention is unwarranted; they are often amazing creatures, and they tend to be the most threatened by stresses like climate change and habitat degradation. All the same, the general public remains utterly unaware of the staggering diversity of strange life forms that inhabit the world’s vast oceans.

Marine biologist C. Drew Harvell and filmmaker David O. Brown would like to help change that. The two have teamed up to produce a documentary entitled “Fragile Legacy.” The film focuses on delicate and bizarre marine invertebrates. The concept for the project comes from their shared fascination with the art of a father-and-son team of glass sculptors.

Naturalist Leopold Blaschka (1822-95) was inspired to work with marine subject matter after encountering bioluminescent siphonophore jellyfish during a ship voyage to the U.S. His first work, based upon Philip Henry Gosse’s “British Sea-Anemones and Corals,” was a collection of glass anemones for the Dresden Natural History Museum. His son Rudolf (1857-1939), who was an avid aquarist, joined him in building what eventually became an enormous body of work. Purchased directly from the Blaschkas by Cornell University in 1885, the collection can be viewed at several galleries and the Johnson Museum of Art on campus. Leopold and Rudolf Blaschka are now remembered and admired for their impressive skill at modeling the distinct anatomical details of their subjects.

With the same eye for extraordinary form and color, Harvell and Brown describe their project as “a voyage of discovery, an adventure merging science, art, history and marine conservation.” While the overall aim is to catch as many interesting critters on camera as they can, their expeditions also serve as an opportunity to see how many of the Blaschkas’ subjects can be found today—that is, to see how much their respective habitats have changed over the last one and a half century. As one might expect, they are especially keen on finding and filming siphonophores.

More information about the project can be found at:
http://www.nytimes.com/2013/05/07/science/blaschka-glass-menagerie-inspires-marine-expedition.html?_r=0.