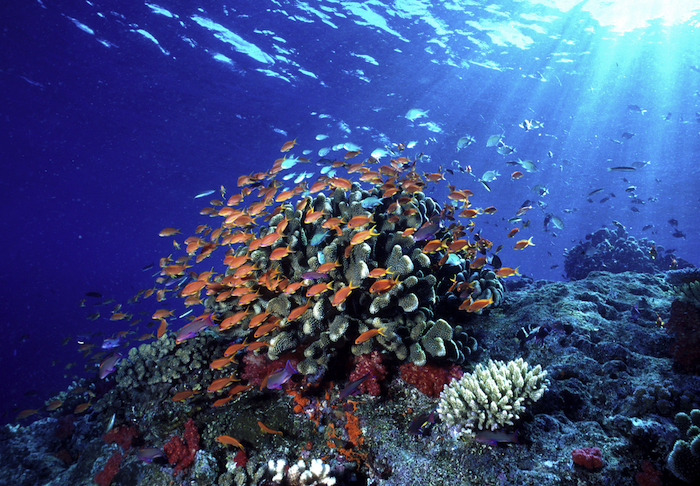 Anthias under sunbeams. Swarms of anthias fish shelter near coral outcroppings and feed in the passing current. Fiji

It’s never fun to jump on the negative news bandwagon, but a recently updated report from the World Wildlife Fund finds our oceans to be in far worse condition than just 45 years ago.

The Living Blue Planet report, published annually, states that the average populations of marine mammals, birds, reptiles and fish declined by 49% between 1970 and 2012. Coral reef coverage has also decreased by more than 50% in the last 30 years. The report more or less attributes all population decline to anthropomorphic (human-driven) influences, including climate change.

The WWF worked with the Zoological Society of London (ZSL) to establish the Living Planet Index; a metric that measures trends in population change for 5,829 populations of 1,234 species of marine-dependent animals. Certain groups, including the the Scombridae family (tunas, mackerels, bonitos, etc.), have been affected by as much as 74% worldwide.

The numbers are truly shocking to anyone with a passion for marine life.

Of course, we always need to be careful when interpreting data to avoid bias. The WWF is an inherenitly partial source and repeatedly uses large figures to shock the audience. The report doesn’t make much of a compelling scientific case to link population change and anthropomorhpic causation. Perhaps that wasn’t the goal, but this is just more fodder for you, the reader, to make your own evaluations.

We can, however, find value in the report’s information if we look at the data through the lens of the “Shifting Baselines” concept.  This is the idea that our perception of what is normal today may not have been normal 40 or 50 years ago. What should our baseline be and can this report help us to determine it? More on this in a later post.

Author Note: I am a big supporter of the WWF and a firm believer in human-induced changes to our oceans, but we can always use more data to justify our arguments.