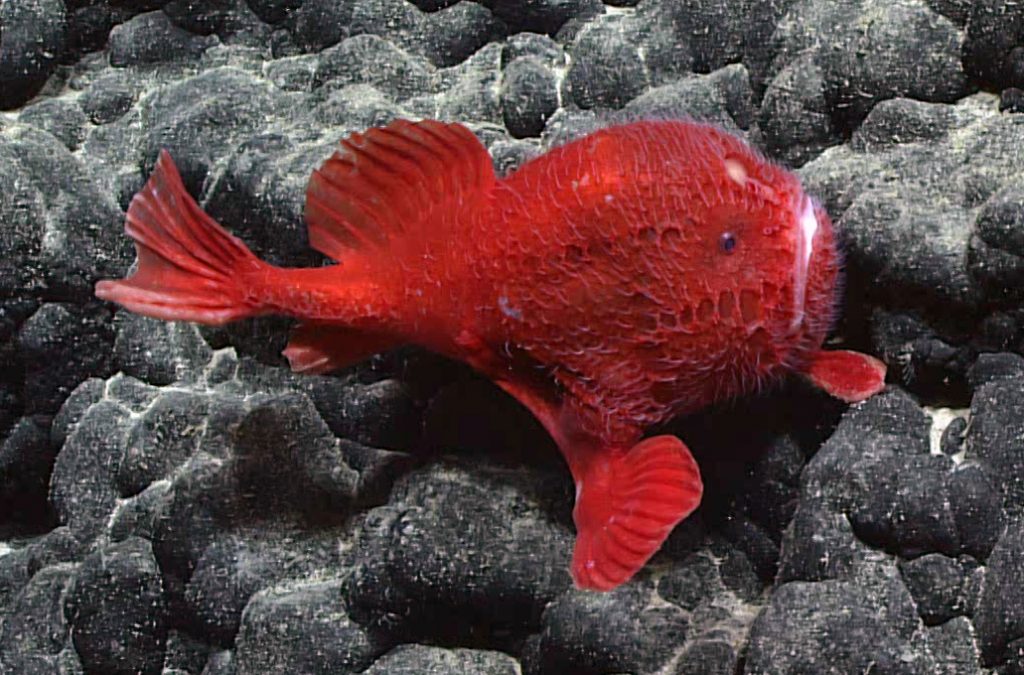 Sea toad or coffinfish (Chaunacops species) was seen at a depth of about 1.96 miles (3,148 meters) during a remotely operated vehicle (ROV) dive at a seamount ridge, dubbed “Beach Ridge,” in the Musicians Seamount group northeast of Oʼahu, Hawaiian Islands. Image courtesy of the NOAA Office of Ocean Exploration and Research, Deep-Sea Symphony: Exploring the Musicians Seamounts.

Everyone’s favorite marine research vessel, NOAA’s Okeanos Explorer, is currently out at the Musicians Seamounts—a little-known and largely unexplored group of extinct underwater volcanoes which lie just to the north of Hawaii—and they’ll be livestreaming their discoveries through the end of the month. It seems like every time their ROV hits the water some new and exciting find is made, like the undescribed species of coffinfish seen above, which was observed at nearly two miles deep. While Okeanos is busy exploring, let’s take a moment to relive some of the more dramatic moments from previous expeditions.

Eels are a common sight on many of the deeper dives across the Pacific, but this unusual specimen found in Hawaii belongs to the rarely seen genus Venefica, known commonly as Sorceress Eels. Unlike the moray eels found on coral reefs, this creature belongs to a small family of deepwater eels, Nettastomatidae, which feature a peculiar elongation to the mouthparts—this has given the family their common name, the duckbill eels. They’re also referred to on occasion as witch eels (though it’s not clear why this is), and this is where the common name for this fish comes from. In Ancient Rome, the veneficae were female practitioners in the magical arts, often using their arcane powers to influence the sexual desires of men. Presumably this eel shares a similar talent, possibly along the prominent lateral line pores.

This small, ghostly fish (Barathronus) was encountered at 2500 meters deep in the Mariana Islands and was the first time that an aphyonid had ever been observed alive. This small family of deepwater cuskeels (AKA brotulas) gives livebirth, similar to their shallow-water coral reef cousins in the family Bythitidae.

For all the cephalophiles out there, here is a neat octopod observed around 500 meters at Johnston Atoll.

Spikefishes (Family Triacanthodidae) are a close relative of the triggerfishes and pufferfishes, as evidenced by their similar fin morphology and swimming style. There are only a couple dozen species, and they are most common in deeper tropical waters. This is likely Hollardia goslinei, and it was a common find around 400 meters at Palmyra Atoll.

The large green structures on this Ipnops head are highly modified eyes, thought to potentially detect the bioluminescence of the worms and crustaceans it feeds upon. This belongs to the same family as the famed tripodfish, and both abound on the vast emptiness of the ocean’s abyssal plain. They also have a shallow-water coral reef relative—the lizardifishes.

Sea slugs are not a common sight in deeper marine habitats, but this large fellow, roughly six inches in length, was found at Jarvis Island, likely feeding upon the numerous zoantharians visible on the rocks. It was tentatively identified as belonging to Pleurobranchia, the side-gill slugs. These are similar to the more familiar nudibranchs, but, instead of having gills exposed dorsally, theirs are tucked neatly along the side of the animal.

This sadistic shrimp managed to snag a fish as it swam by and proceeded to pick it apart. Watch in horror as this unfortunate vertebrate struggles in vain. Is there a worse way to die than having your flesh removed one tiny pincer-full at a time?

This fearsome fellow is likely a viperfish in the genus Chauliodes and was seen at the Ufiati Seamount. Species in this group are bathypelagic predators and can grow up to a foot in length.

…and here’s a hermit crab that lives symbiotically with a weird, deepsea zoantharian. I wrote about these a while ago.

And here we have something that should be a bit more familiar to aquarists, a dragonet. This group is actually far more diverse in deeper waters, both along continental shelves and around oceanic islands, like here at Howland Island, where this individual was found at 600 meters. The monstrously large eyes are clearly an adaptation which allows this highly visual predator to hunt in these dimly lit conditions.

With its gaudy yellow and red colors, this Chaunax seems like it belongs on a coral reef.

This tonguefish is doing its best impression of a millipede, slowly crawling about in an undulating wave. I’m still not convinced this is actually a fish…

And, lastly, one of my favorite fish finds from Okeanos… this is a Black Scorpionfish (Ectreposebastes imus), a pelagic species which looks to me like a goth version of a dwarf lionfish; however, the two are only distant relatives in the scorpionfish order, classified in separate families. It’s roughly the same size as a dwarf lionfish too, topping out at around six inches. It occurs around the world in tropical and temperate waters, most commonly at depths of 500-800 meters, where it swims in a vertical position in search of the crustacean prey that makes up the bulk of its diet. Check out the video below to see one in action…