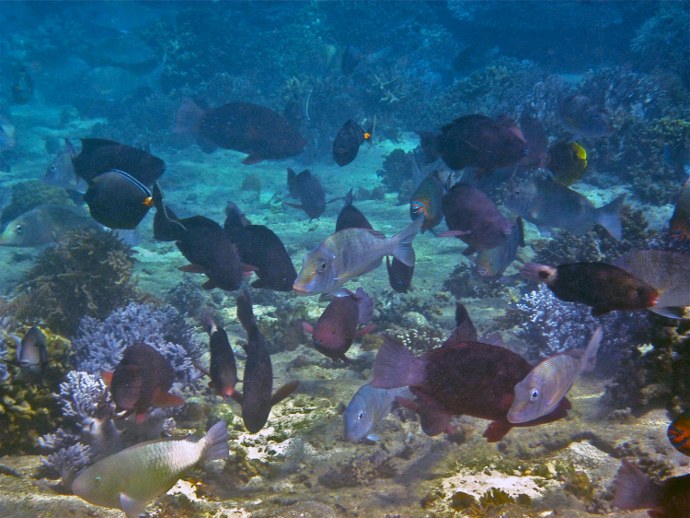 Using underwater video cameras to record fish feeding on South Pacific coral reefs, scientists have found that herbivorous fish can be picky eaters – a trait that could spell trouble for endangered reef systems.

In a study done at the Fiji Islands, the researchers learned that just four species of herbivorous fish were primarily responsible for removing common and potentially harmful seaweeds on reefs – and that each type of seaweed is eaten by a different fish species. The research demonstrates that particular species, and certain mixes of species, are potentially critical to the health of reef systems.

“Of the nearly 30 species of bigger herbivores on the reef, there were four that were doing almost all of the feeding on the seven species of seaweeds that we studied,” said Mark Hay, a professor in the School of Biology at the Georgia Institute of Technology. “We did not see much overlap in the types of seaweed that each herbivore ate. Therefore, if any one of these four species was removed, that would potentially allow some macroalgae to proliferate.”

The research has been published online ahead of print by the journal Ecology and will be included in a future print edition. The study was supported by the National Science Foundation (NSF), the National Institutes of Health (NIH) and the Teasley Endowment to Georgia Tech.

Macroalgae – known as seaweeds – pose a major threat to endangered coral reefs. Some seaweeds emit chemicals that are toxic to corals, while others smother or abrade corals. If seaweed growth is not kept in check by herbivorous fish, the reefs can experience rapid decline. Overfishing of coral reef ecosystems has decimated fish populations in many areas, contributing to overgrowth by seaweed, along with the loss of corals and their ability to recover from disturbance.

To determine which fish were most important – information potentially useful for protecting them – Hay and Georgia Tech graduate student Douglas Rasher moved samples of seven species of seaweed into healthy reef systems that had large populations of fish.

They set up three video cameras to watch the reef areas, then left the area to allow the fish to feed. They repeated the experiment over a period of five days in three different marine protected areas located off the Fiji Islands. In all, Rasher watched more than 45 hours of video to carefully record which species of fish ate which species of seaweed.

“The patterns were remarkably consistent among the reefs in terms of which fish were responsible for removing the seaweed,” said Rasher. “Because different seaweeds use different defense strategies to deter herbivores from eating them, a particular mix of fish – each adapted to a particular type of seaweed – is needed to keep seaweeds off the reef.”

Among the most important were two species of unicornfish, which removed numerous types of brown algae. A species of parrotfish consumed red seaweeds, while a rabbitfish ate a type of green seaweed that is particularly toxic to coral. Those four fish species were responsible for 97 percent of the bites taken from all the seaweeds.

“It’s not enough to have herbivorous fish on the reef,” said Hay, who holds the Harry and Linda Teasley Chair in Environmental Biology at Georgia Tech. “We need to have the right mix of herbivores.”

While just four fish species consumed the large seaweeds, Rasher observed a different set of species involved in what he termed “maintenance” – the removal of small algal growths before they have a chance to grow.

“Through our videos, we were able to observe both groups in action,” he said. “There was not only little overlap in which fishes ate the large seaweeds, but there was also little overlap between fishes that comprised the two groups.”

To help determine why certain fish ate certain seaweed, the researchers played a trick on the unicornfish. They removed chemicals from each seaweed species that the unicornfish avoided and coated them individually on a species of seaweed that the unicornfish were accustomed to eating. That caused the fish to stop eating the chemical-laced seaweed, suggesting that chemical defenses kept them from consuming some seaweeds.

Surveying these larger areas, the researchers found strong negative associations between the abundance or diversity of seaweed on the reef and diversity of herbivorous fishes at the sites they studied.

“What we noted in Fiji is that where reefs are fished, they look like the devastated reefs in the Caribbean,” said Hay. “There’s a lot of seaweed, there’s almost no coral and there aren’t many fish in these flattened areas. But right next to them, where fishing hasn’t been allowed for the past eight or ten years, the reefs have recovered and have high coral cover, almost no seaweed and lots of fish.”

“This really demonstrates the value of reef protection, even on small scales,” Rasher said. “There is a lot of debate about whether or not small reserves work. This seems to be a nice example of an instance where they do.”

Ultimately, the researchers hope to provide information to village leaders that could help them manage their reefs to ensure long-term health – while helping feed the local human population.

“Not fishing is really not an option for people in these communities,” Rasher said. “Giving the village leadership an idea of which species are essential to reef health and what they can do to manage fisheries effectively is something we can do to help them maintain a sustainable reef food system.”

Beyond the researchers already mentioned, the research also included Andrew Hoey from the ARC Centre of Excellence for Coral Reef Studies at James Cook University in Townsville, Australia.

This research was supported by the National Science Foundation (NSF) under grants OCE 0929119 and DGE 0114400, and by the National Institutes of Health (NIH) under grant U01-TW007401. The opinions expressed are those of the authors and do not necessarily represent the official views of the NSF or NIH.