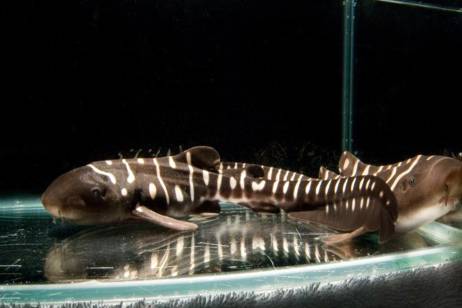 An aquarium in Dubai has reported the first known case of parthenogenesis in the zebra shark, Stegastoma fasciatum.  The female shark has been in the Burj Al Arab’s aquarium since 2001 when she was a pup. For the last four years, she has been laying eggs that developed and hatched. DNA tests confirmed that the pups had no father.  Virgin births are not unheard of in the animal kingdom.  Rotifers reproduce by parthenogenesis exclusively and it is well documented in some amphibians.  The first confirmed case of a shark using this mode of reproduction occurred at the Henry Doorly zoo in Nebraska a couple of years ago when a female bonnethead, Sphyrna tiburo who had spent her entire life at the zoo in the absence of any males, gave birth to a single pup.

Parthenogenesis is a process whereby a female produces eggs which are able to develop without fertilization.  The first step is for the egg to double its chromosome number. This would normally be accomplished by the chromosomes of the egg and sperm cell combining to restore the diploid number – the number of chromosomes characteristic of the organism.  Once the diploid number is restored, development proceeds as if the egg had been fertilized.  Does parthenogenesis produce clones?  Not exactly.  Although all of the DNA comes from the mother, egg cells (and sperm cells) are produced by a process called meiosis, which involves some internal shuffling and redistribution of DNA.

Scientists consider parthenogenesis to be extremely rare among vertebrates, but perhaps zoos and aquariums can help to demonstrate that it is more widespread than previously thought.