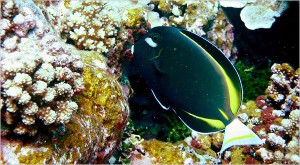 I have a lot of faith in marine aquarists as a whole. If I didn’t, I would have stepped out of the hobby the first time I saw a wild coral reef. Many of us have experienced these beautiful undersea cities firsthand, and have made a commitment to care for our captive charges with appreciation and respect. The first step to achieving the goal of a sustainable aquarium is keeping your livestock healthy, so that you aren’t constantly replacing dead fish. In the previous two installments of this little series, I introduced some ideas about getting healthy livestock, acclimation and quarantine. Also, I discussed a reverse acclimation process that minimizes the time a fish is stuck within a shipping bag, as a drip line fills it with water. 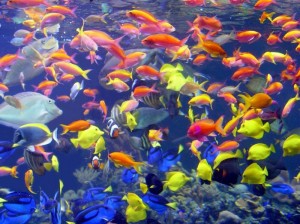 It is without a doubt that nutrition is by far the most vital link in the chain of long-term success as an aquarist. It goes deeper (no pun intended) than that. Imagine you are offered a thick, medium rare, porterhouse steak. You can practically taste the juices oozing from the sides. Yet the steak is sitting on a concrete driveway during the middle of July in Florida. Sure steak is appealing for those of us that eat meat, but eating off the ground isn’t.

Often in our reefs we are expecting a wide variety of species to eat the same thing, the same way. By far, the most popular way to feed fish is to simply disperse a clump of food into the water column, and allow the current to spread it throughout the tank. Often it’s effective, yet it assumes that every species in your aquarium has the same feeding habits.

Look at that mouth:

Anyone familiar with marine fish can see that mouths come in all shapes, sizes and placements. Harlequin tuskfish have menacing teeth jutting out of a downturned mouth. Butterfly fish have small, plier like mouths that look like surgical instruments. Anthias have tiny mouths centered in their heads. Could this all be nature’s unique way of making fish diverse? Actually no, those mouths tell you a lot about your fish. 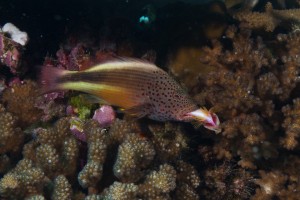 Species like the anthias, with small mouths centered in their head are often mid-water plankton feeders. Those with down-turned mouths like that of the tuskfish are suited at grabbing food from the bottom. The precision jaws of the butterfly fish are apt at nabbing tiny prey items from deep crevices in the rock. Each of those animals has evolved to feed a certain way, and while they can adjust to a different feeding arrangement in captivity, presenting their food how they would find it in nature can often make a huge difference. You don’t see humans gathered along the side the road gorging away every time there’s roadkill, so it would be insane to expect our aquarium inhabitants to eat in a way that’s totally unnatural to them.

Plankton feeders, such as anthias and several reef safe triggerfish need multiple small feedings per day. This re-creates the natural instinct of munching away at plankton as it drifts through the current. Smaller fare works best, and I often recommend Nano-Frenzy from LRS’ Reef Frenzy line of foods. Nano-frenzy is chopped up, chopped, chopped again, with a final chop breaking the food down to just a few nanometres. This mixed with a frozen plankton diet creates a perfect blend for mid-water planktivores. . 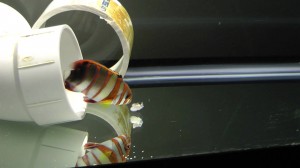 Predatory species, such as groupers, eels, and a host of others feed once or twice a week, loading their gut and then disappearing into the rocks to digest.

Wrasses eat a mix of mid-water fare, along with picking tiny crustaceans and other items from the rock.

Butterfly fish like to pry out entrenched creatures such as aiptasia anemones, while surgeonfish prefer to graze all day, much like a horse munches on grass. The point, understand your species natural feeding habits and replicate them.

Garlic, contrary to popular belief, does not cure external or internal parasites. It won’t cure ich, or anything else for that matter. What it does do, is helps fishes’ immune systems remain intact. Captive life is stressful for marine animals, even under the best circumstances. When an animal is stressed, often the immune system does not function at 100%. Garlic helps to keep it running well enough to ward off simple infections, or possibly shoot down a parasite infestation before it takes off.

Amino acids and vitamin C are vitally important. Amino acids are building blocks for life, and essentially help your body in facilitating a host of biological functions. Since many of the foods we feed in the aquarium (especially frozen fare) are nutritionally hollow, fortifying with amino acids allows them to aid in keeping fish healthy. 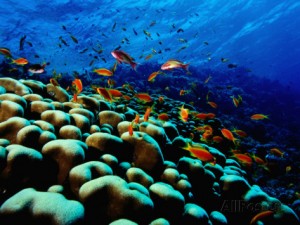 Vitamins in fish are like vitamins in human beings, or any other animal. Maintaining the appropriate balance of vitamins allows fish to remain healthy, and vitamin deficiencies have been implicated as a cause of head and lateral line erosion.

Remember that using amino acids and vitamins to fortify your animal’s diet doesn’t make them “healthier” per say. It allows them to gain the same level of nutrition from a captive diet, that they would gain from a wild one.

Pelleted foods have their place, in the bowls of guinea pigs and other small animals. They have a place as a supplement in our aquariums. There are high quality pelleted foods on the market. There are cases where very healthy specimens are fed a diet solely compose of pellets. In my experience, these cases are rare. 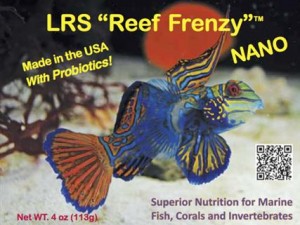 Frozen foods can offer marine fish the same experience as feeding in the wild. Using the “feed mode” on many high-end pumps, you can create the wiggle and squirm that marine fish seek when looking for dinner. As I said above, many of these frozen foods are nutritionally hollow, so you need to invest in some additives to boost them, and perhaps your fishes’ appetite at the same time.

Some fish are hard to get eating. Appetite enhancers can help, but often re-creating their natural feeding activity works best. Do your research and learn just how your new and established charges eat. For example, many newly introduced tangs and angelfish will not accept algae from a clip. Though, if you rubber band the same algae sheet to a small piece of live rock and place it at the tank’s bottom, they go crazy for it. Allow feeding to be a learning experience, and never be afraid to try something new. 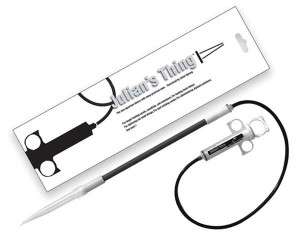 Julian Sprung’s company Two Little Fishies (TLF) and CPR Aquatics both make feeding tools that can be very helpful. TLF’s tool, aptly named Julian’s Thing is a coral feeder, that also works handy at spraying tiny food particles throughout the tank for mid-water plankton feeders. CPR’s tool is a long acrylic shaft (he said shaft heh heh heh heh) that allows you to feed beneath the water’s surface, in any area of the tank.

Fish like Harlequin Tuskfish prefer to eat food floating close to the substrate. Using CPR’s tool in conjunction with TLF’s Thing works to place food on the substrate, then agitate it so that it floats in the fish’s direction.

If you are concerned about internal or external parasites, New Life Spectrum (NLS) makes two new medicated pellets, one called Ich Shield and the other called Hex Shield. Often new arrivals, and finicky species will not accept these pellets, or any pellet for that matter. Smashing the pellets up with a meat tenderizer, into a fine powder allows you to soak them in frozen food. This doesn’t guarantee that with each bite your fish is getting a bit of the medicated pellet, but overall I’ve found that they get quite a bit of the powder while chomping down the frozen fare.

Once your species are eating algae from a clip along the aquarium glass/acrylic, get two clips. In fact when using a rubber band to attach algae to live rock, do so in several places. Having multiple algae grazing spots not only re-creates a natural feel, but it also helps curb aggression if more than one species is a grazer. Anyone who has kept multiple grazers in their tank, knows about the congregation of fish around the algae clip at feeding time.

Marc Levenson sort of pioneered the idea of using a jar full of food to feed finicky eaters, namely mandarinfish. Creating a feeding zone for finicky eaters isn’t a bad idea. Using live rock and acrylic, a small cave can be created that offers a viewing window. A small entrance only allows small fish to enter, and keeping the feeding zone unattached to anything else in the tank, allows it to be emptied of uneaten fare once feeding is over. Perhaps in a future post, I will walk you through building your own feeding zone.

As always, if you have a question regarding feeding your fish, email me at jjeremy@gmail.com