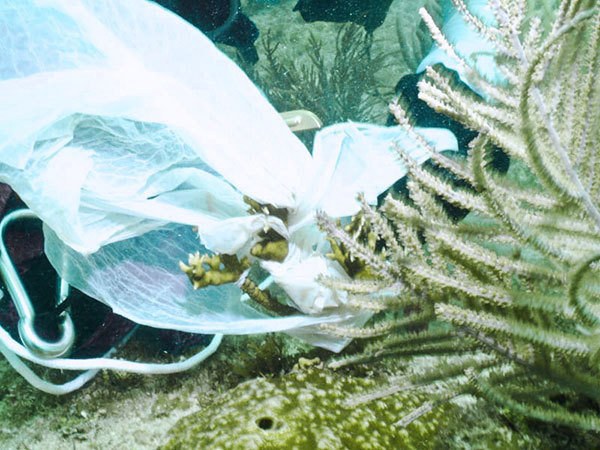 This fire coral (Millepora alcicornis) is entangled with a plastic grocery bag on Graceland Reef, Florida.


The Florida Department of Environmental Protection, Florida Fish and Wildlife Conservation Commission, and Palm Beach County Reef Rescue coordinated the cleanup effort this past July with seven volunteer dive boats from three counties participating in the event.  This effort was undertaken in order to clean up debris and refuse that has accumulated on the reefs over the years.

As mentioned above, plastic grocery bags, beer and pop cans, fishing lures and lines, sandals, sunglasses, diving equipment, lawn chairs, and golf balls were found during the cleanup. Plastic grocery bags were particularly nasty as they were easily mistaken by sea turtles for their normal prey: jellyfish. Fishing line was another item that caused a lot of problems as it easily entangled with coral and marine life.

Karen Bohnsack of the Florida Department of Environmental Protection commented that “anything that would entangle an organism or that something might mistake for food” is a problem, she said. “Plastic bags are an issue for sea turtles, and they can also entangle the coral and rub back and forth, and that can kill the actual coral animal.”

During the cleanup, the divers were careful with the removal effort. If coral had encrusted a particular trash item, they carefully cut away the unencrusted portion leaving the remainder to encrust over time with coral.

The program also urges recreational divers to remove small debris items as they encounter them. Reporting larger items is encouraged by either contacting Southeast Florida Action Network hotline at 866-770-SEFL or at SEAFAN.net.