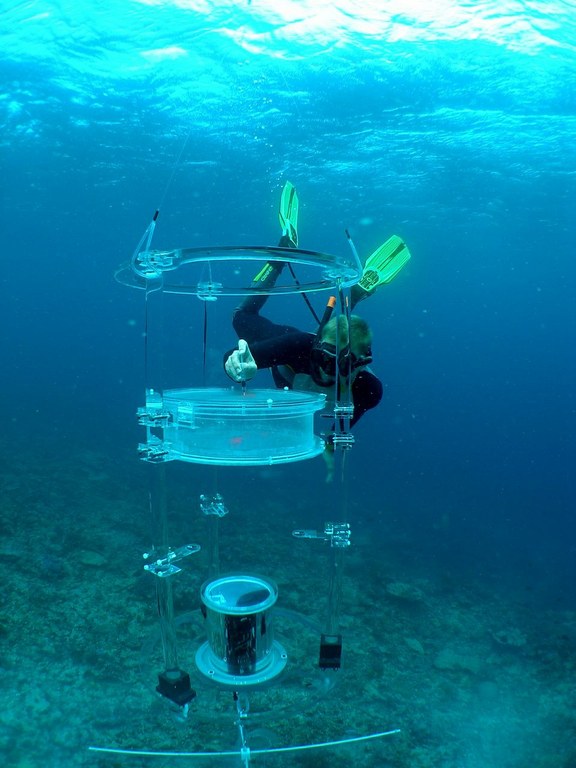 How tiny fish larvae travel away from the reef, then know how to navigate their way back home is a scientific mystery.

A new study led by Dr. Claire Paris, Professor at the University of Miami (UM) Rosenstiel School of Marine & Atmospheric Science conducted at One Tree Island in the Great Barrier Reef is helping to shed some light on the topic. Working with colleagues from UM, Boston University, Laboratoire Oceanographique de Villefranche, James Cook University and Oldenburg University, the team has established that reef fish larvae can smell the presence of coral reefs from as far as several kilometers offshore, and use this odor to find home.

Members of the research team had established earlier that reef fish larvae could discriminate between the odors of different nearby reefs while preferring the odor of the reef where they were settling (Gerlach et al. Proceedings from the National Academy of Science, 2007). However, these experiments were done under controlled conditions in a shore-based laboratory.

“In this collaborative study we expanded our work to demonstrate that the odor responses can also be detected under the field conditions,” said Dr. Jelle Atema, Boston University Professor of Biology. “This establishes for the first time that reef fish larvae discriminate odor in situ.”

The current study, which appears in the August 28 edition of PLOS-ONE, was designed to test the response of larvae in a natural open ocean setting using an outflow plume from One Tree Island. Using light traps, the team collected settlement-stage larvae from cardinalfish [Apogonidae] and damselfish [Pomacentridae].

In deployments to the north and south of One Tree Island, single larvae were observed in the central chamber of an o-DISC (ocean Drifting In Situ Chamber,) a unique device created in Paris’ laboratory that is composed of circular behavioral arena transparent to light, sound and small scale turbulence. The light-weight piece of equipment was set adrift in the water column and the swimming activity and bearing of the larva was recorded using an underwater motion sensing and imaging system. The o-DISC tracked larval movement and orientation using odor cues from the environment.

This juvenile damselfish smells its way back home. Photo by Paul Asman and Jill Lenoble.

Species from the two reef-fish families reacted very differently to the olfactory stimulus. Cardinalfish tended to speed up their movement in response to odors in the plume, but their orientation toward the reef was not apparent. They zigzag within the o-DISC chamber, which led the researchers to believe they were using infotaxis, or sporadic odor cues, in their attempt to orient. In contrast, damselfish slowed their swim speeds, and there was orientation along the shoreline and toward the west. They seemed to be moving with a compass, triggered by the odor stimulus.

“Ocean currents do not appear to influence the orientation of fish larvae,” said Paris. “They do not provide a frame of reference since larvae are transported within. Instead, we find that fish larvae navigate by detecting turbulent odor signals transported kilometers away from the reef. Subsequently they switch to a directional cue, perhaps magnetic or acoustic, which allows them to find the reef.”

Other fish, including mature sharks and freshwater juvenile salmon navigate using olfactory signals, but this is the first study to report that fish larvae use similar odor cues.

“The implications of this study are tremendous, because we have to take into account the impact that human activities might have on the smells contained within the ocean. If these larvae cannot get their ‘wake up’ cues to orient back toward the reef they may stay out at sea and become easy prey before finding home,” said Paris.

The University of Miami’s mission is to educate and nurture students, to create knowledge, and to provide service to our community and beyond. Committed to excellence and proud of the diversity of our University family, we strive to develop future leaders of our nation and the world. Founded in the 1940’s, the Rosenstiel School of Marine & Atmospheric Science has grown into one of the world’s premier marine and atmospheric research institutions. Offering dynamic interdisciplinary academics, the Rosenstiel School is dedicated to helping communities to better understand the planet, participating in the establishment of environmental policies, and aiding in the improvement of society and quality of life. For more information, please visit www.rsmas.miami.edu.