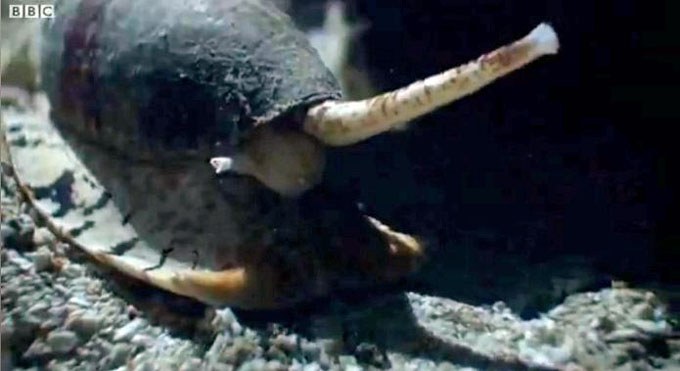 A cone snail stalking its prey.


The cone snail is classified in the Conus genus, which is very large (over 600 species) and comprises predatory snails from small to large. It’s tropical and every single one of them is venomous.

Snails of this genus sometimes hitchhike in on liverock so care should always be taken when handling an unknown snail as their stings can be rather nasty. The best bet is to not handle them at all. The ones that prey on fish are exceptionally dangerous as their venom is much more potent and can cause death in humans given the right species of cone snail. Typical symptoms of a cone snail sting “include intense, localized pain, swelling, numbness and tingling and vomiting” with symptoms beginning immediately or delayed up to a couple days. Muscle paralysis is also possible in addition to changes in sight and respiratory failure. Given that there’s no antivenom, the only hope is for the victim to be hooked up to life support until the venom has run its course.

Fish eating cone snails are especially interesting as one wouldn’t think that a slow snail could actually capture let alone eat a sizeable fish. However this is exactly what they can do.

What these snails do is to submerge themselves in the sand and wait for a fish to come along. They are able to sense when their intended prey is near through the use of their osphradium organ (which is attached to their respiratory system) that tests incoming water for particular chemical markers.  When they sense a potential victim, they emerge out of the sand and slowly creep forward. When close enough, the snail emits a chemical cocktail that immobilizes its victim and then the snail slowly engulfs it. Finally, the snail “harpoons” the fish with a poisonous barb called a radula tooth which finishes off the fish. After digestion the snail will regurgitate undigestible material like scales and bones.

The below video was shot in the giant reef tank at the James Cook University in Cairns, Australia by BBC Two for the Great Barrier Reef television program.