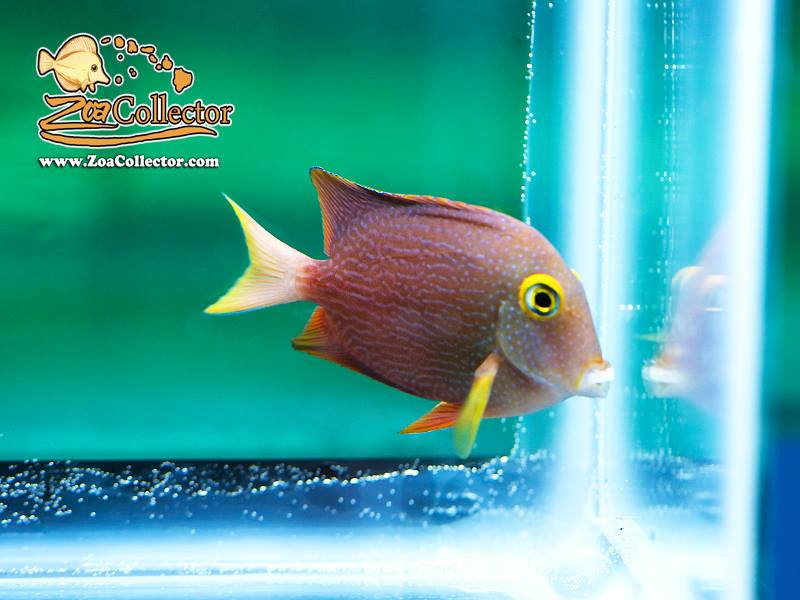 The Kole Tang (Ctenochaetus strigosus) is an especially abundant species in the waters of Hawaii and among the most popular surgeonfishes within the aquarium trade. Yet, despite the large number of specimens that are photographed and collected, we seldom see any variability in this fish. Kole Tangs pretty much always look the same… but not this one.

The anomalous individual seen here comes courtesy of Colin at Zoa Collector, who found it on the eastern side of Oahu swimming with more traditional looking C. strigosus. The differences are quite apparent: 1) the caudal fin is mostly white, fading to yellow posteriorly. 2) the lips are a pale bluish-white. 3) the spots extend well past the eyes. 4) the stripes are uneven and broken.

So what do we have here?

The simplest explanation is that this is merely a full-blooded Kole Tang with some unusual mutational idiosyncrasies—not every weird specimen has to be a hybrid. However, in this instance, I’m going to argue that this is a hybrid… and a particularly interesting one at that. The combination of a white caudal fin and the spotted patterning behind the eyes is something that we find in a close relative of the Kole Tang that occurs just to the south.

Ctenochaetus flavicauda, the Whitetail Tang, is found throughout the southern portions of Polynesia, stretching from American Samoa in the west to Pitcairn in the east and north into the Line and Phoenix Islands. Seemingly the only place it hasn’t been found is in Hawaii, but it’s not unreasonable to expect it there on rare occasion as a waif. For example, the Black Tang (Zebrasoma rostratum) has a virtually identical distribution in Polynesia, and it too is normally absent from Hawaii, but there are documented instances of this species having made the journey north. Vagabonds like this presumably require atypical oceanic currents (perhaps driven by changes brought about by the El Niño–Southern Oscillation) to occur at just the right moment in their juvenile development to ferry them beyond their normal biogeographic barriers.

If this were to happen with a Whitetail Tang from the Northern Line Islands, such a lost soul would have no recourse but to breed with a Kole Tang, and the hypothetical offspring would probably look a bit like this specimen, no?

Just to cover all our bases here, there are a couple other semi-plausible candidates as potential parents which are worth mentioning. The Bluelip Tang (C. cyanocheilus) occurs nearby in Micronesia, and it also has spots (vs lines) behind the eyes… but it’s caudal fin is dark. And, of course, there Hawaii’s beautiful Chevron Tang (C. hawaiiensis), which has squiggly lines vaguely similar to our specimen. But we recently saw what a purported Chevron X Kole hybrid looks like, and it was nothing like what we see here. So that leaves us with our original hypothesis, a Whitetail X Kole hybrid. Unless this is just some weird aberration. You can never be too sure… 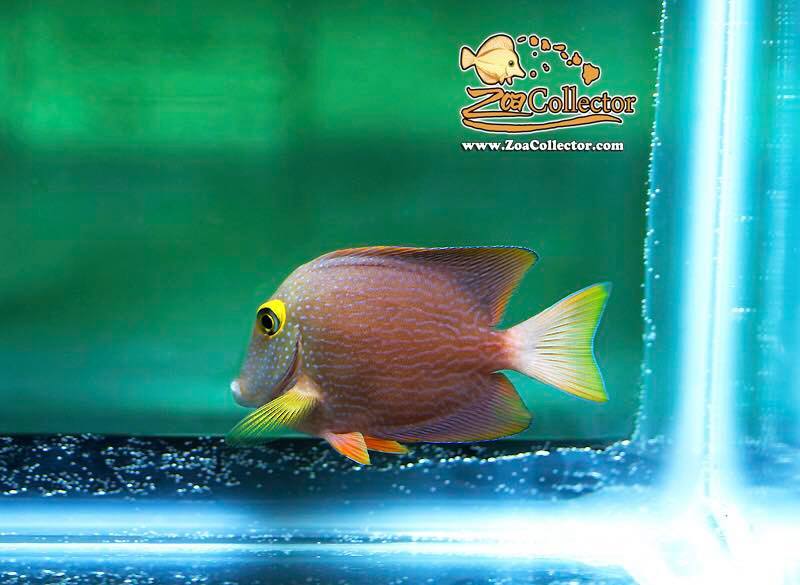