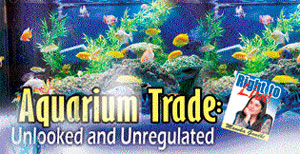 When I originally read this article, I got heated and furiously wrote up a response, glossing over key details and relevant information. Upon reviewing my piece, I was dissappointed. The anger and frustration was palpable and that’s not how I had wanted to come across. This sort of issue needs to be addressed calmly, cohesively and justly. Maneka Sanjay Gandhi clearly put some time and research, albeit a wealth of false and misleading information with the potential to damage the integrity of our industry, and I feel it’s respectful as a writer to respond tactfully instead of taking cheap shots. It’s not in good taste to attack her ignorance of clownfish breeding when I’m completely unfamiliar with the breeding practices in India, yet at the same time, she shouldn’t attack the entire industry with a limited understanding of the rest of what the hobby is doing in such areas. So after a few deep breaths and a decent amount of research, I’ve decided to revisit.

Let me start by addressing exactly why articles like this are damaging. It’s just part of an irritating dilemma our industry is facing – blatant misinformation being dispensed and believed by your Average Joe who doesn’t know nor cares to know any better. More, this kind of material is exactly what fuels anti-aquarium activists. Literally it’s dumping gas onto the fire of drama that excites extreme conservationists more than actually helping the environment does. Articles like this paint an ugly picture without any basis in reality, causing folks to believe the entire aquarium industry is rampant with greedy, irresponsible criminals with little if any regard for the welfare of coral reefs and their residents. I’m not saying these people don’t exist, but they’re few and far between. Ghandi also fails to note the rigorous efforts of conservation being made on our end by public aquariums, collectors and hobbyists alike.

I’ll bring up the clownfish blurb first and get it out of the way as it irks me since even an ounce of research would shoot this down within seconds.

But clownfish, for instance, the demand for which shot up after the cartoon Disney film Finding Nemo, cannot be bred. They come from coral reefs and they are long distance swimmers. Baby clownfish travel as much as 400 kilometres to find anemones, without which they cannot live. 90% are killed by natural predators during their travels. Now the other 10% are being poached for your “relaxation”.

I may or may not have spat my drink all over my keyboard after reading that statement. Really? They can’t be bred? This is news to ORA, Sustainable Aquatics and Proaquatix. And those Lightning Maroons must have spawned in the light of what can only be described as a miraculous defiance of nature. Alright, then.

I thought perhaps they don’t breed them in India, and the author was simply naive to practices in other areas of the world. But alas, this is sadly untrue. There’s a great deal of successful breeding projects, all printed in the Indian Journal of Marine Sciences. Link and link.

Gandhi also talks about clownfish being robbed from islands all over the world. Bali is home to a very successful clownfish-breeding program, which produces many of the highly desirable “designer” morphs seen today.

Moving on, “Millions of fish are caught and put into small glass prisons every year where they die within a few weeks.”. Ok, I worked at my local fish store scrubbing algae at the ripe, young age of sixteen. Needless to say, I’ve seen my fair share of irresponsible hobbyists attempting to pack their tanks like a clown car, filled with whatever pretty little fish tickled their fancy. Some would come in a few days later, Ziplocks with corpses and furious accusations of being sold “bad fish” by some other employee. After some interrogation, I’d often find out their tanks were never cycled, nor did they have any idea of biological filtration.

They simply dumped in their latest purchase to wake up to a  piscine graveyard. I was very firm with whom I sold fish to, and made sure to get a full breakdown of their tank parameters, its inhabitants, and their prior experience. I moved a lot less livestock than my coworkers. This particular customer, however, was thankfully a minority. Most people looking to start tanks are genuinely willing to at the very least listen to advice and will more often than not follow it. So this is the classic old tale of a handful of jerks ruining the reputation of an entire community – like those stickers that warn you not to put your baby in a paper shredder, no you can’t put clownfish in your freshwater pond.

The other irritating factor, Gandhi points a finger at Hawaii, and the Philippines, amongst other places, for practicing a “free for all” collection process. Hawaii is well regulated by the state, with both federal and state fisheries requiring permits allowing collection. Recently, no take zones were enacted on several Hawaiian reefs, promoting an abundant rebound of diminished species. The Waikiki Aquarium, under the helm of Charles Deelbek, has been instrumental in measuring the effect wild fish collection has on Hawaii’s reefs.

Some collectors, who were also online vendors, closed their doors, citing the constantly evolving set of permits as a culprit responsible for pushing them out of business. To someone who doesn’t follow reef conservation or marine aquariums, Gandhi’s article might be enough to make them question their next trip to any public aquarium. For those already invested in the fight against captive aquatic ecosystems, this just further strengthens their resolve. What’s frightening is that this is not just some journalist, Gandhi is a government figure. Aside from being an animal rights activist, she is the Indian Union Cabinet Minister for Women & Child Development in the Government of PM Narendra Modi. Widow of the Indian politician, Sanjay Gandhi, Maneka has quite the platform and an eager audience.

The aquarium trade should be banned. Have we not banned hunting for mammals and birds? So, why do we allow hunting, selling and buying of fish.

Do people not keep exotic birds and mammals all over the world? Is she just trying to paint a horrifying picture of the aquarium industry? She also completely fails to mention the huge percentage of the industry, which offers scientific advice on how to save wild reefs. Rare, deep-water animals and threatened/protected species are the subject of breeding programs, some of which I’ve had the privilege of seeing first hand. Hell, in Australia, they’re harvesting and freezing coral sperm (at an Aquarium, mind you), creating sperm banks in hopes of replicating entire ecosystems.

I’ll give Gandhi this – there really isn’t enough regulation or a whole-bodied protection agency in existence. How does one take complete jurisdiction over such a massive body of our planet? With so many contrasting laws, countries and power-struggles, it would seem this is a nearly impossible feat, at least for now. If she has any ideas on how to correct this dilemma, I’d love to hear them. In the United States NOAA takes point on any consumer/vendor related abuses to the environment, and this goes without mentioning that each state has a department of fisheries which investigate environmental crimes. Most states require coral propagation facilities to carry an aqua culture license, which manages what is sold, right down to how grey water is disposed in sensitive watersheds.

From what I’ve read, India is riddled with illegal collection practices and underground fish trade, playing a huge hand over the decades in severe population decline. But why does she have to call out the entire industry as a whole?

Ret Talbot has a really informative article out from last year going into great detail about “India’s Underground Fish Trade” and it’s definitely worth a read . Ranting and raving aside, I really respect what Maneka is attempting to do here, her heart is clearly in the right place. What irks me to my core is the misinformation. This is only a tiny example in a sea of fallacies that are out there. I will say this, the hobby right now is in the spotlight. There’s some malpractice going on that does need to be addressed. From over-collecting, intentional miss-labeling of protected species, cyanide collection, irresponsible hobbyists who put whatever tickles their fancy into their 30-gallon tank without regard for the tragic outcome, there’s a wealth of room for improvement. It’s not as bleak or rampant as many of these outlets would have you believe. Our focus needs to be on “responsible reef keeping” – moderation, mindfulness and making sure that our own tanks are operated with long term consequences in mind. Most importantly, keep yourself informed and educated, and don’t believe everything you read (except this, you can believe this).