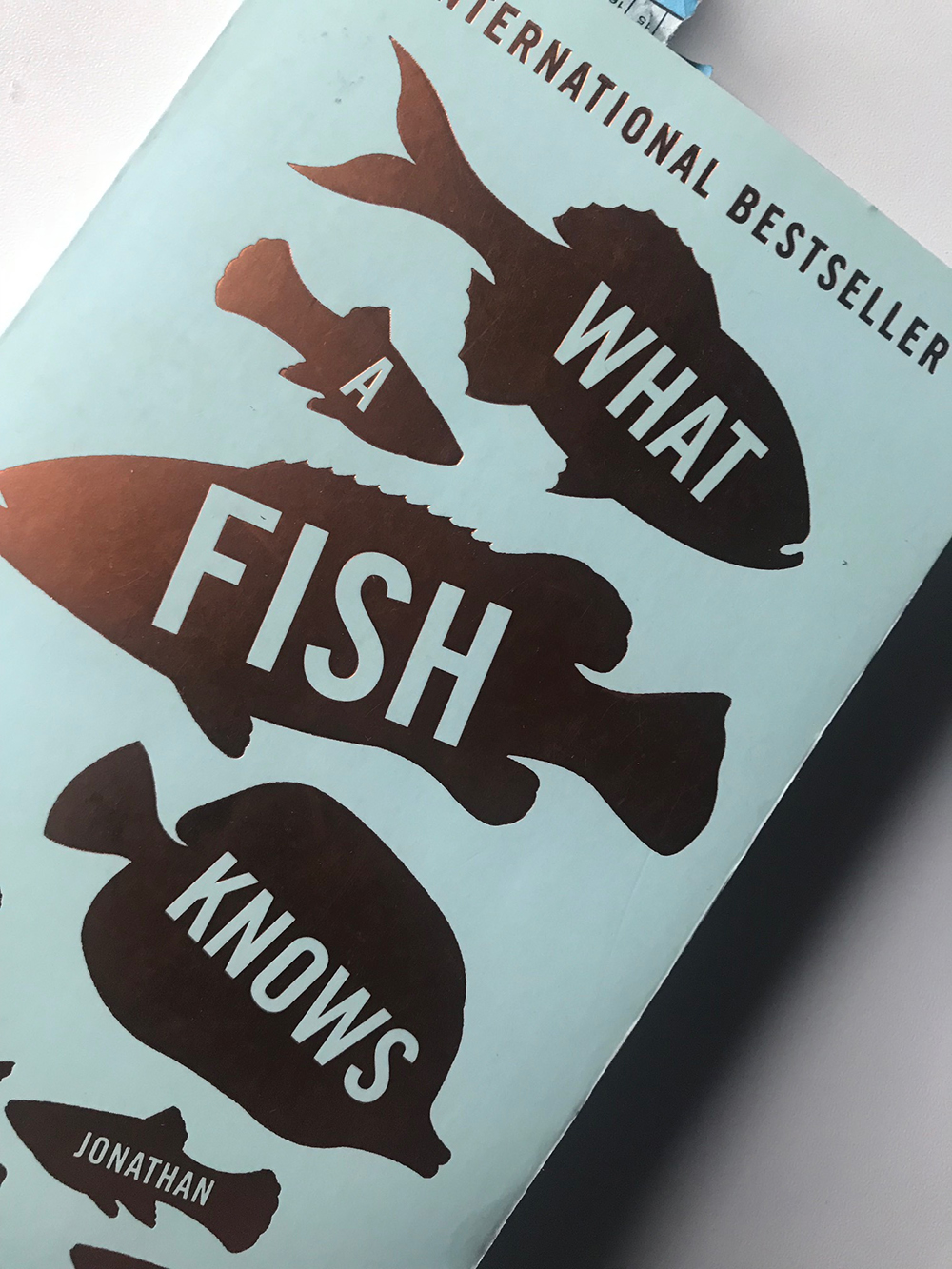 I’ve finally got around to reading What a Fish Knows, by Jonathan Balcombe.  Published in 2016, it became a best seller and attracted a wealth of praise from plaudits from the New Yorker to the Dalai Lama.  So, what makes it such a great read?

I imagine it is quite easy (for a skilled author… I’m not saying anyone can do it), to summarize a long list of scientific reports and papers and present them to a wider audience.  That is what this book could have been. However, what the author has done is summarize the most current research about how fish perceive the world around them, how they interact with their environment, and how they feel, think and act, with a writing style and approach that turns a potentially dry subject into a ‘page-turner’.

The author sets out his opinion, which he argues cogently throughout, that we entirely misjudge fish (or fishes – he prefers this more personal plural), and how we commoditize them, talking about ‘fish stocks’ or fish in terms of ‘tonnage’, and how we use terms such as ‘overexploitation’ as if it is okay to exploit them.  He also uses plurals such as ‘trouts’ and not ‘trout’, forcing us to consider fish as individuals rather than an amorphous mass.

What then follows is a series of superbly written chapters, illuminated with the latest research that, for me anyway, often touches on research I vaguely recall, before bringing it up to date.  We learn how Knifefishes communicate with electric discharges for example, and later on in the same chapter, the author looks at the piscine brain to ask the question of whether a fish can feel pain.  This is followed by analysis of studies as to whether fish can feel pleasure, anxiety, and even reassurance.  As you can imagine the actions of cleaner fish are discussed at great length, as well as some of the clever studies that have been carried out to determine if cleaners can reduce stress in their clientele.

As the author develops his theme of awareness within fishes, the book examines how fishes might think.  He challenges our mammalian prejudices, that have served to deny fish higher reasoning and continues to paint a picture of animals that are capable, in many cases, of showing skills far more than many terrestrial vertebrates.  He cites the ability of some gobies to ‘map’ their intertidal habitats.  He also investigates some aspects of behavior that are ever so slightly odd to us: sperm drinking in Corydoras, for example: It can pass through the gut very quickly to fertilize eggs!

Throughout the book, there are some wonderful anecdotes that the author has collected in his research.  Some of these will no doubt ring very true with hobbyists who have also claimed their fish can recognize their faces or appear to enjoy a stroke or a tickle.

The final short chapter chronicles how humans treat fishes commercially, how we catch them and how we exploit the ever-dwindling number of fishes in the sea.  This is not done in an emotional way, in fact it is almost chillingly restrained in detailing how the fish die and how their capture impacts the oceans, from bottom trawling to shark finning.

Finally, the ‘Notes’ section serves as a useful source of scientific studies, used as source material, which interested amateurs (like me) can explore to delve more deeply into the subject.

To close, Balcombe has presented a well-researched book that provides a convincing argument to suggest fishes (perhaps not all of them – we simply don’t know yet), are far more aware and capable than many believe.