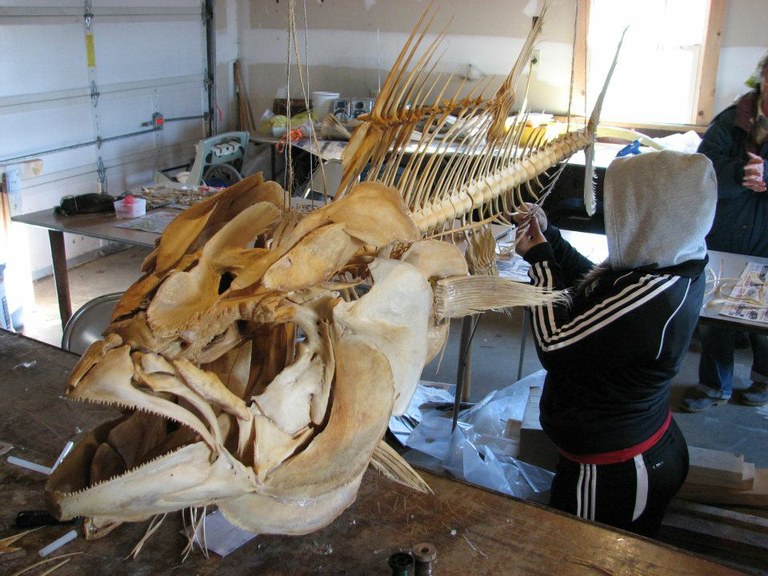 The skeleton mostly put back together.


Sometime last year this 300 pound bluefin tuna washed up on the shore in northern Maine. University of Maine students learned of the carcass a week or two later and decided to use it in their skeletal reconstruction class. After getting containers to put all the pieces and parts in, they packed up and made the trip to the shoreline and did their best to salvage the rotting remains.

After months of soaking in ammonia, the real work began. Seven students in the skeletal prep class began the arduous task of piecing the fish back together again. This fish measured six feet in length and took them almost the entire semester to put back together again. They used a lot of hot glue and 1/8 inch rod in the reconstruction process and the results are a sight to behold.

Not only is it an almost complete skeleton but it’s an articulated skeleton meaning that many areas of the skeleton are actually jointed and can move freely. Based on their cursory search of the internet, there are only six other articulated tuna skeletons in existence. They had no idea that this was a rarity when they started out the project.

What are they planning on doing with the skeleton once it’s completed? Display it in a case the foyer of the science building where professors can use it as a teaching tool and the school administration can use it to woo prospective students to their school.

If anyone has any other projects like this that they know of, please let us know!