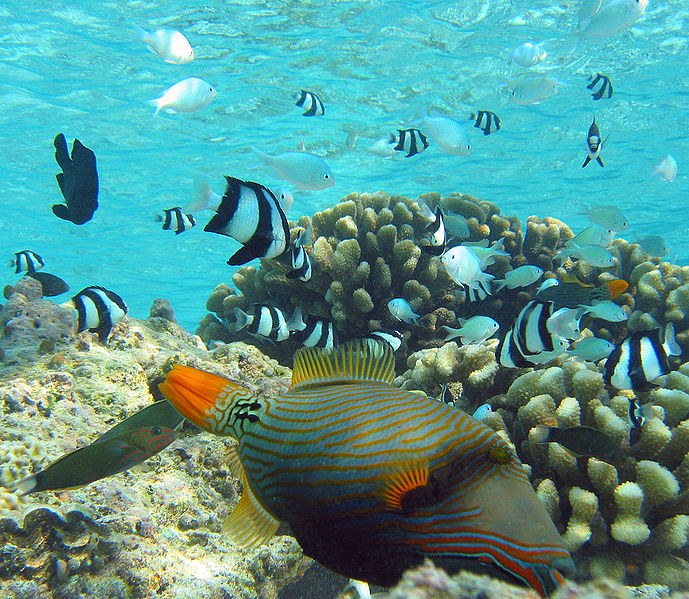 Fish have personal food strategies but may learn eating habits from their peers.


As it turns out, fish and birds aren’t all that different than humans when it comes to our different approaches to novel foods. Members of the same species have very distinct personalities that shape our personal decisions to try new foods.  Some of us are neophobes (fear of initial novelty); we always stay within our limited palettes no matter what.  Some of us are “Adventurous Consumers” willing to eat just about anything that will fit in our mouths.  And then there are those in between, called “Dietary Conservatives,” who stick to the foods we know but may eventually accept (even fixate on) foods outside of our original comfort zone.

Two recent studies give us much to contemplate when it comes to acclimating fish to new foods, and it’s important to keep in mind most of the foods we feed our captive fish are novel to them.

One of the studies found that tropical fish are more Adventurous Consumers than researches had anticipated.  The scientists initially theorized that tropical fish, like temperate fish previously studied, would be predominantly Dietary Conservatives because “survival of the fittest” suggests that optimized food consumption would lead fish to have very narrow palettes.   And while most of the tropical fish they researched were indeed Dietary Conservatives, the scientists discovered their tropical fish were a mixed population with a surprising portion of Adventurous Consumers.  The researchers theorize that tropical fish may be more adventurous eaters because tropical environments offer a greater variety of foods than temperate ecosystems.  In other words, the biodiversity of tropical waters may be partially responsible for why many of the fish we keep are willing and able to eat the “unnatural” foods we provide them.

But the research also shows fish have very distinct predispositions as well as individual “foodie” personalities.  Some species may be predisposed to neophobia.  Think: obligate coral feeders.  Some species may snack on anything we throw into the water.  Oscars, I’m looking at you! Yet others might take some time and coaxing to get to eat; Regal Angelfish is a classic example.  More interestingly, individuals within the same species may also fall anywhere within this continuum of neophobes to Adventurous Consumers.  For example, we know some Regal Angels may immediately eat prepared meals while others never learn to accept new foods.  Genetics plays a significant behavioural role on both the species and individual level.

So are there any practical takeaways from these studies?

The other study shared in Trinity College Dublin’s news release suggest that young chicks can learn to imitate the feeding behavior of competitors.  Dietary Conservatives are able to learn new food strategies by socializing with their Adventurous Consumer peers!  Granted, the research studied birds, but I’d claim that anecdotal observation amongst aquarists suggests this phenomenon may also be true for fish to some extent.  Aquarists have regularly found that juvenile fish – even of notoriously finicky species – are more open to new foods than adults.  We’ve also seen fish pick up eating habits (sometimes bad habits) from tank-mates.

The lesson may be to leave most of the known finicky feeders in their natural habitats but attempt husbandry of only juveniles of these species by advanced aquarists.  We may also be able to teach juvenile fish to eat by placing them with adventourous-eating competitors (e.g. fish of the same species) or fish already weaned onto captive foods.  Captive breeding thus may offer us great opportunity to train finicky feeders such as Mandarins to accept a variety of foods starting at a young age.  Breeders may consider offering a diverse variety of foods to their reared fish.  It’s worth a shot to raise more adventurous feeders, right?

Studies Show How Copycat Feeders Benefit by Imitating Their Competitors

Biologists from Trinity College Dublin have shown that individuals with very different, ingrained approaches to trying new foods are influenced by the presence and actions of rivals eating those same new foods.

Through a combination of genetic hard-wiring and environmental influences, animals in a given population conform to one of two foraging strategies. Adventurous consumers (AC) are willing to try new foods and rapidly accept them, while dietary conservatives (DC) are loath to accept new menu items, often refusing to eat them for a very long time.

However, it seems with chicks – as sometimes with young children – that imitation goes hand in hand with development. As expected, the researchers found that AC chicks accepted new food more speedily when they were in competition for it with rivals. DC chicks responded similarly, but only when they could clearly see their competitors were eating the same new food that was also available to them. When the new food was camouflaged by wood shavings, they stuck to their non-adventurous urgings and avoided the new offerings.

Associate Professor and Head of Zoology at Trinity, Nicola Marples, said: “This is particularly interesting because it shows that, unlike the AC individuals, DC chicks actually treat their rivals more as social partners than as competitors. It is fascinating that both these strategies persist in the population, rather than either AC or DC taking over entirely. DC individuals are less likely to eat poisonous foods, and may become better at handling the foods they do eat, while AC individuals are ‘jacks of all trades’, eating a wider range of food types, but perhaps accidentally eating poisons more often.”

“There must be some benefit to each strategy, but it’s not yet clear how they stay in perpetual balance with each other. Although we’ve not done formal tests with people yet, it would be really interesting to see whether fussy children act like DC birds, and follow suit if they see their older brothers and sisters eating new food at the dinner table.”

The research, just published online in the prestigious journal Animal Behaviour, has implications for better understanding the ways ecosystems function and change in relation to environmental disturbances that affect food availability as well as for conservation planning when endangered birds are reintroduced to the wild. Exposing birds to novel foods and letting them observe their rivals eating these foods might encourage speedier acceptance of a broad diet, which could in turn increase the chance of survival after release.

In another paper that considered foraging strategies, and which has also just been published online in Animal Behaviour, the researchers turned their attention to fish to see whether the food-fussy DC strategy was also present in four different tropical species, as it is in sticklebacks that live in more temperate waters.

Platyfish, one of the fish studied. Photo by Gareth Dominy

Among the most intriguing findings was that, as with chicks, individuals conforming to AC and DC strategies were both present in the same population. From an evolutionary angle, it might be expected that one strategy would be more beneficial than the other and thus lead to total domination set against the backdrop of ‘the survival of the fittest’. However, a mixed-strategy population seems to be the best option natural selection can come up with.

Professor Marples said: “If the reason both strategies persist is that the DC individuals are avoiding poisonings, then we would expect there to be lots of DC fish in the tropics where lots of potential food is poisonous. However the tropical fish had a much lower frequency of DC individuals than the fish in Europe, suggesting that AC individuals are actually doing better there. It may be that there is such a wide variety of potential foods in the tropics that just concentrating on a few is not as viable as eating a wide diet.”

As with the chick study, the research has widespread implications for our understanding of ecological and evolutionary processes, as well as for more commercial matters, such as rearing fish in the progressively booming aquaculture industry, and understanding the foraging behaviour and associated survival of wild fish in often fragile natural habitats.

Professor Marples added: “Fish raised in hatcheries that are subsequently released into rivers are generally fed a narrow diet of food pellets. Our research suggests that individuals conforming to the DC strategy could struggle to survive in a natural environment, especially if food stocks are low and these fish lack foraging experience.”

This research was carried out in collaboration with researchers from Cardiff University. Full copies of the two journal articles are available here, and here.