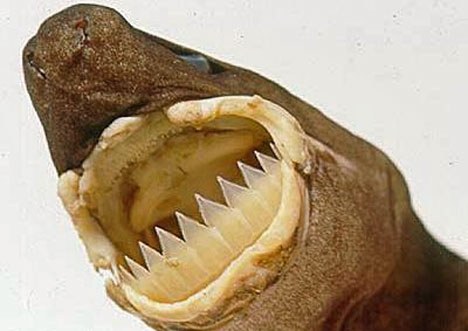 The maw of a cookiecutter shark. Photo by http://www.sharkdivers.blogspot.com/

To give you a bit of background: cookiecutter sharks measure no more than two feet in length when mature and they live up to their name. A cookiecutter shark bite resembles a gouge that looks just like a cookie cutter cutout from its victim. These sharks reside predominantly around islands and will attack just about anything: submarines, undersea cables, large mammals, fishes, and squid.  During the day they are typically found around 2.3 miles deep and migrate to the surface at dusk.

The report documents how marathon swimmer Mike Spalding came about being the first documented victim of a cookiecutter shark. At the time of the attack, Mike was attempting to swim (at night!) across the 29 mile wide Alenuihaha channel between Hawai’i and Maui. The first bite was to the chest and was relatively minor. The second one to his calf, however, was not. When pulled from the water, a 2.5 inch by 3/4 inch deep gouge was found in his calf (photo below). Mike was rushed to the hospital where the wound was taken care of with a skin graft.

Deep Sea News is carrying a follow-up to this attack with an interview with Mike. It’s interesting to read Mike’s step-by-step account of the incident and I suggest that you head over and read the transcript in full.

Thanks to Matt Wandell for bringing this news item to our attention!