When it comes to corals, you can’t judge a book by its cover 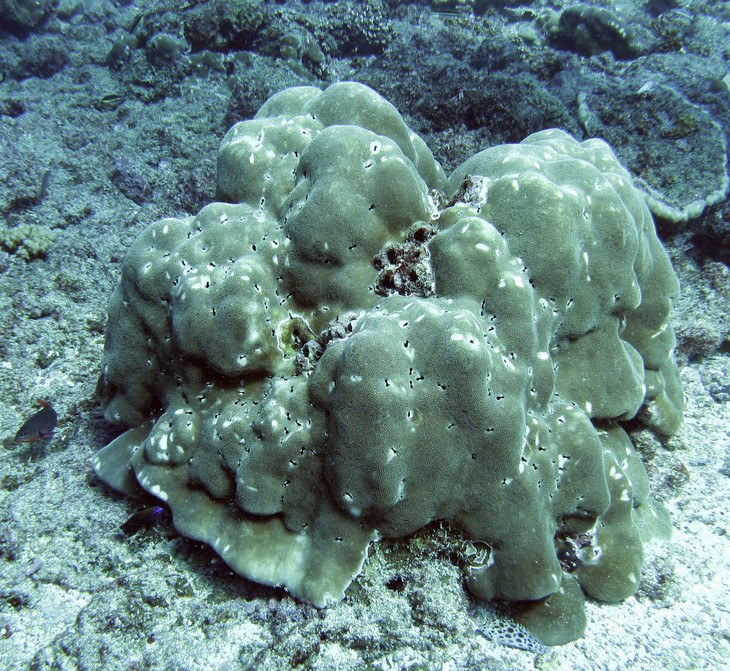 Adult Porites coral. The key-hole shaped openings in the colony surface are made by tiny mussels that live inside the coral skeleton. Image: Iliana Baums, Penn State University

Just as interesting is how their differences (invisible to the naked eye) may help one species succeed where another might fail.  For example, the SPS corals Porites lobata and Porites evermanni exist at the same reef sites and look indistinguishable.  However, when the scientists analyzed their data, they discovered not only two distinct species growing together but P.evermanni was more successful at reproducing than P.lobata.  The reason: Under their copycat exteriors, P.evermanni were more hospitable to boring mussels growing in their skeleton.  Triggers hunt these mussels, biting off chunks of the Porites and distributing the fragments over the reef thus creating new colonies from these frags.  This is similar to how many terrestrial plants propagate.

Two corals (Porites sp.) growing side by side. The left colony is bleached: it appears white. During bleaching the partnership between symbiotic algae that live inside the coral cells and the coral host breaks down giving the coral a white appearance. The colony on the right is still green/brown and has a healthy population of symbionts living in its tissue.  Image: Iliana Baums, Penn State

UNIVERSITY PARK, Pa. — Rising water temperatures due to climate change are putting coral reefs in jeopardy, but a surprising discovery by a team of marine biologists suggests that very similar looking coral species differ in how they survive in harsh environments.

“We’ve found that previously unrecognized species diversity was hiding some corals’ ability to respond to climate change,” said Iliana Baums, associate professor of biology at Penn State. A scientific paper describing the team’s discovery will be published in the print edition of the Proceedings of the Royal Society B on Feb. 7, 2014.

Coral reefs protect shorelines from battering hurricanes and generate millions of dollars in recreation revenue each year. They also provide habitat for an abundance of seafood and serve as a discovery ground for new drugs and medicines.

Baums led an international research team that included Jennifer Boulay, a Penn State graduate student; Jorge Cortes, professor at the University of Costa Rica; and Michael Hellberg, associate professor of biological sciences at Louisiana State University. The researchers sampled the lobe coral Porites lobata in the eastern Pacific Ocean off the west coast of Central America and genetically analyzed the samples to reveal differences among various sample locations. When the scientists analyzed their data, they found an unexpected pattern: one that suggested two separate lineages of coral that look deceivingly similar and sometimes live together in the same location.

Genetic data confirmed that the samples were not all Porites lobata, as the researchers initially thought. Instead, some belonged to the species P. evermanni.

“That surprised us,” Baums said. “These two lineages look identical and we thought they were all the same coral species, but evermanni has a very different genetic makeup. We knew about P. evermanni — it’s not a new species — but we didn’t expect to find it in the Eastern Pacific, which is a suboptimal environment for coral. Typically you find P. evermanni in the waters of the Hawaiian Islands.”

Boulay wondered if the two species differed in the way they live. She found that P. evermanni was less susceptible to bleaching than P. lobata. Bleaching occurs when the symbiotic relationship that corals share with single-celled algae breaks down as a result of an increase in water temperature.

“If water temperatures continue to rise, and they surely will, coral species that succumb to bleaching more easily will die,” Baums said. “So we’re going to see a shift in the relative abundance of these two species.”

Boulay found other important differences: P. evermanni had many genetically identical clones, which means that this species is reproducing asexually by breaking apart, although P. lobata did not. Further, the clonally reproducing P. evermanni, on average, housed many more tiny mussels that lived within the coral colonies’ skeletons. The mussels poke through the surface of the colonies and form keyhole-shaped holes.

The researchers then wanted to determine the connection between P. evermanni‘s ability to clonally reproduce and its interactions with the mussels and other members of the reef community in the eastern Pacific. Cortes remembered that several years ago a colleague had reported a finding that some corals are a target of biting triggerfish.

“That was the missing piece,” Baums said. “We realized that triggerfish were eating mussels inside the coral skeletons, and to get at the mussels the fish have to bite the coral. Then they spit the fragments out, and those fragments land on the ocean floor and grow into new colonies.

“This is what’s fascinating,” Baums continued. “No one has ever realized how important fish might be in helping corals reproduce, and here we have evidence that triggerfish attacks on P. evermanni result in asexual reproduction — the coral fragments cloning themselves. Conversely, the other coral lineage, Porites lobata, has fewer mussels and reproduces sexually through its larvae.”

“It takes two to tango so you need a partner,” she said. “In areas of the Eastern Pacific that are so harsh that only a few individuals can survive, it might be easier for the coral to clone itself, ensuring that the offspring can survive as well.”

As for the difference in bleaching, there are two possible explanations. One possibility is that the types of algae living in the coral species are different, and one of them can withstand a hotter temperature. “Just like in your garden — the tomatoes like the heat more than the cauliflower does,” said Baums.

Another possibility is that the difference is not in the algae but in the corals themselves.

“In the literature there’s been a lot of attention paid to how different algal species react to increases in temperature and whether, if a coral species could switch to a hardier alga, it could survive hotter temperatures,” Baums said. But what the researchers found suggested a different scenario. Even though the two coral species have the same algal species, bleaching still differs. That suggests it’s the coral host that contributes to bleaching.

“The good news in all of this is that some of these corals are true survivors, especially in the eastern Pacific,” Baums said. “It’s a rough place for coral to live but they are still hanging around. So if we can figure out how to slow down climate change and keep identifying some hardy corals, we can do something about preserving coral reefs.”

The research was funded by the National Science Foundation, Grant #OCE-0550294.