Until the introduction of captive bred specimens a few years ago, the Wideband Anemonefish (Amphiprion latifasciatus) was one of the rarest and priciest species of anemonefish in the aquarium trade, sometimes selling for thousands of dollars. But even less well-known is another beautiful species, still scientifically undescribed, that lurks in the obscure reefs along Madagascar’s northeastern coastline. Now, thanks to Golden Coast, this elusive fish has been collected for the aquarium trade for the very first time.

The most distinctive feature of this fish is the prominent white margin found on the caudal fin and  dorsal fin rays. In the true Wideband Anemonefish, which occurs in the northwestern reefs of Madagascar (type locality: Nosy Be) and to the west at the islands of Mayotte and Comoros, these fins are solidly yellow in large females (sometimes only yellow-margined in males). Another useful trait is the greatly expanded middle stripe, which is typically several scale rows wider than in the true Wideband Anemonefish. 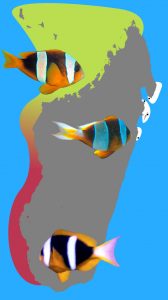 Thus far, this unique species is known from Masoala National Park, Mananara Avaratra, Nosy Boraha (Île Sainte-Marie) and Nosy Alanana (Île aux Prunes), near Toamasina. This last locality is where the aquarium specimens were collected from and corresponds with the southernmost reefs along Madagascar’s eastern coast. In total, only around 200 miles of coastline in this region offers the sort of habitat suitable for this fish, giving it one of the smallest distributions within the genus, rivaling the equally sparse A. snyderi and A. chagosensis. The nearest reefs to the north, at Nosy Ankao, are more than 150 miles away and are presumably home to the true A. latifasciatus, though this awaits confirmation. 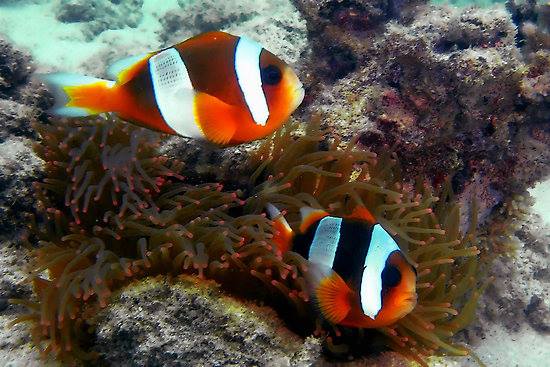 With the opening of Golden Coast’s new facility at Toamasina, we can expect to see the Whitemargin Anemonefish (A. cf latifasciatus) with some regularity—eight were collected in this first batch. However, until captive bred specimens become a reality, this is one Amphiprion that will likely be out of the price range for many aquarists. There’s definitely a strong need for this beautiful fish to enter into propagation, as its small population size renders it somewhat vulnerable to overcollection. No doubt, aquarists are going to be eager to get their hands on this one, so hopefully it won’t be long before affordable, captive bred specimens are available to meet demand for this ultra-rare fish.