Why is my dinner on display? 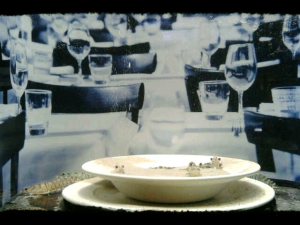 This is definitely not your ordinary exhibit tank, but then again, neither is the message that aquarist Ruth Wright is trying to get across to the public.  Yes, this is a public aquarium exhibit (at the Two Oceans Aquarium in Cape Town, South Africa).

This unusual tank has drawn quite a lot of attention since it was revealed and it’s not even a big stand-alone tank, it’s a small exhibit alongside a whole host of other small exhibits and photos that make up their mosaic wall. The message is that of sustainability.  Sustaina-what? Yes, it’s one of those annoying buzz words that the media jump on and it starts to appear in every bit of print.  It’s like the word biodiversity.  The average Joe Blogs gets bombarded with words like these from the scientists and is then expected to know exactly what it means.  When we finally figure out the meaning, the word has been used so much that it seems to have lost its impact.  So anyway, the meaning…

Many countries around the world have joined the Sustainable Seafood Initiative: South Africa, Australia, USA and China (Hong Kong) are just a few.  These countries have lists of fish that should not be caught or bought, as they are over-exploited species, and then those that have been given the green light for consumers.  Some countries, like South Africa, have gone even further and set up an SMS line to which you can SMS the name of a fish (while you stand in the shopping queue or sit at your restaurant table) and you will get a reply as to whether it is alright to buy or whether you should rather choose something else.

The featured aquarium tank displays prawns which are on the orange list in South Africa.  Orange means that you should rather steer away from purchasing these species as they are on their way to the red list (DO NOT BUY OR CATCH list).  The reason for this is that prawn trawlers are not selective, for every plate of prawns that you eat, NINE plates of bycatch go to waste.

A thought-provoking exhibit don’t you think?