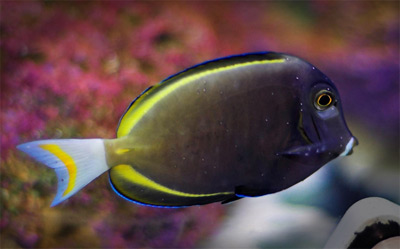 During yesterday’s Thanksgiving get-together, a teenaged nephew asked me about marine ich (Cryptocaryon irritans)—the one fish disease he’s heard something about from a friend who keeps saltwater tanks. As I explained the parasite, its lifecycle, and why I think it’s so important to quarantine new specimens, he asked, “If ich spreads so easily, why aren’t all the fish in the ocean infected?” Thrilled that, for once at least, I could offer my curious young nephew something akin to wisdom, I explained that the following factors help keep ich infections at a manageable level in wild fish populations:

The vastness of the ocean Even though coral reefs appear to be bristling with fish, the density of the fish population relative to the volume of the ocean is, if you’ll excuse the pun, a mere drop in the bucket. Remember, during the tomite, or theront, stage of the Cryptocaryon lifecycle, the free-swimming parasites must find a host fish to attach to and feed upon within a relatively short period or they die. In the vast ocean, with its limitless water volume and powerful, dynamic currents, only a very small number of tomites ever succeed in locating a host. On the other hand, in a closed aquarium system, even if the actual number of fish specimens is fairly small, the population density is still extremely high relative to the volume of water. Of course, the density of host-seeking parasites relative to the water volume is also very high. MORE