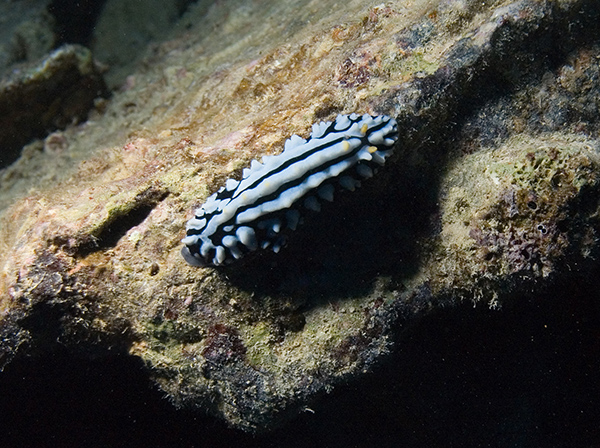 The head end is to the right

It’s a good job that nudibranchs don’t have feelings, I think this one would be quite upset at having possibly the most unappealing name in history.  Meet Phyllidia varicosa, aka the Varicose Wart Slug.

What a thoroughly unattractive series of words that is and to be honest its not one of the most attractive of its kin.  Phyllidia is a genus of nudibranchs, all of which are lumpy (hence the wart part of the name) and even in the case of P. exquisita or P. elegans, pretty unappealing.

All the species are generally white with black and yellow markings, though P. flava is yellowish overall.  They are all assumed to feed on sponges and are toxic, advertising their unpalatable nature to potential predators with these vibrant markings – think bees and wasps here – the warning colors are the same idea.  One source suggests that Phyllidia varicosa’s coloration and form is copied by the juveniles of an equally unappetizing sea cucumber species, Pearsonothuria graeffei

Many nudibranchs have rasping radulae (tongue-like structures in their mouths covered with hundreds of tiny tooth-like structures), for grazing purposes; indeed this is a gastropod trait in general. However, lacking such feeding structures, Phyllidia species are even more easily insulted by calling them ‘sponge suckers’.

And then I came to look over my images and I realised I’ve been making a mistake for many years and there is a name worse than Varicose wart Slug.  Here it is, the Pustulose Wart Slug. 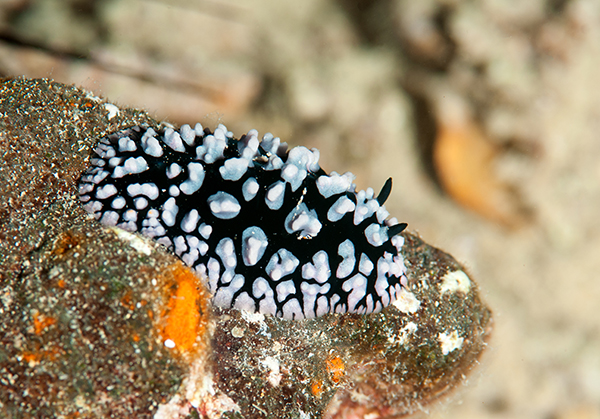 The head end is to the right, You can see the two sensory structures known as rhinophores