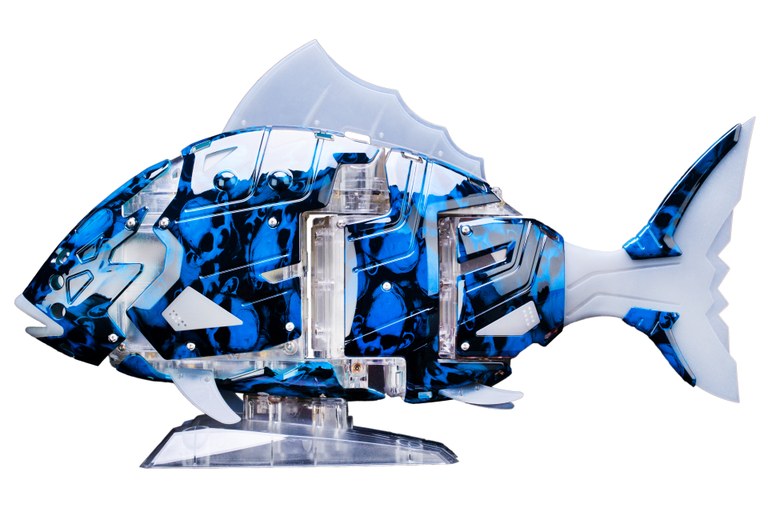 The Miro-9 in blue (on display stand)


In 2012, AIRO introduced its first bio-mimetic (biological-mimicking) aquatic robot called the FIRO.  The MIRO, short for Marine Intelligence Robot, is its newest version.  It features waterproof, saltwater-safe, multi-joint articulations.  The MIRO also employs an electronic swim/air bladder that is both located where real fish swim bladders are found as well as functions like the real thing.  The combined technology produces a robotic fish that impressively mirrors fish locomotion.

The MIRO can be wirelessly controlled from either an Android mobile app or a special tactile control panel.  However, it was really designed to swim autonomously like a real fish.  It has four built-in collision avoidance sensors to help it navigate the waters on its own.  It can swim randomly in all directions (including up and down as deep as 10 meters) at varying speeds.  On a five hour charge, it is able to sustain autonomous operation for approximately ten hours.

Two size models are currently available; The MIRO-9 is 53cm long while the MIRO-7 is 35cm long (yes, pretty big).  AIRO plans to release much smaller models (MIRO-5 and MIRO-3) “soon” which will be more suitable for personal aquaria.  The MIRO is currently available in solid colors (white, “dark” tan, blue, red, and gold), but AIRO has announced other colors options that mimic real fish such as koi (example below):

Cosmetically, the MIRO won’t ever be confused for the real thing.  But it really shines when you watch it in motion.  Below are two videos of the MIRO in action.  From a distance viewed either from the top or side, they mimic live fish motion very well … better than any other robotic fish we have seen yet.  Only when you get up close do you realize it’s actually a robot.