You focus on the eyes! 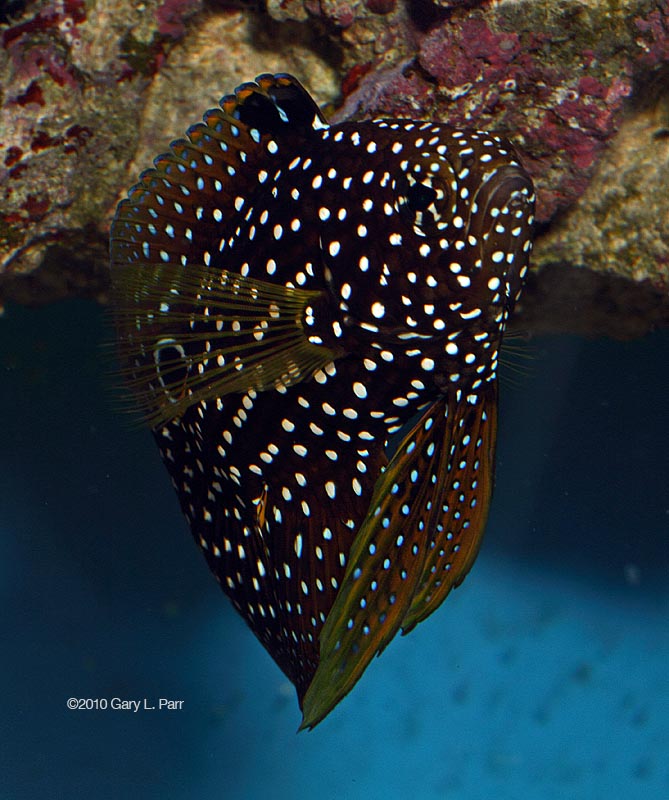 Rule number one when photographing animals (that includes humans) is to get the eye(s) in focus. Your mind will accept just about any animal photo if at least one in-focus eye is present. If not, you tend to seek something else to look at.
That’s a nice rule to live by until you try to photograph Calloplesiops altivelis, the Comet, or Marine Betta. As you can see in the image, this fish’s eyes are superbly camouflaged. While this fish is slow moving (a huge plus) the fact that it is generally shy and reclusive adds to the difficulty of creating a good image of this beautiful animal.
I’ve had a handful of opportunities to photograph this fish in the past, but each time the specimen either wasn’t healthy, refused to move into an open area, or both. In 2010, during one of my Florida trips, I had the privilege of visiting Mark Iltis in Tampa. His reef has several nice animals, but the standout was his Calloplesiops altivelis. It was an extremely healthy fish that was comfortable enough to spend considerable time in open water, though never far from the safety of the rocks.
I seized the opportunity to make several photos of this specimen. You can see some of the “keepers” in the Animals section at www.gparr.com. However, the image that is the focus of this article is my favorite for three reasons.
First is the position of the fish. For most fish photos we like to get a broadside shot with as many of the fins displayed as possible. That position really shows off the fish shape and colors, but I prefer shots in which the fish is doing something other than just hovering in the water. In this shot the fish is emerging from the cave, giving a definite sense of motion.
Second is that the very dark, highly camouflaged fish “cooperated” by positioning its head in front of lighter colored rock so it is easier to see its head shape and mouth details.
Third is the fins. I think the most beautiful feature of the comet is its fins. If you ever get to see all of the fins displayed, it’s quite impressive. This shot doesn’t have that, but it does allow us to see the rich colors that make up the fin rays.
One more thing. Yes, the eye is in focus. But don’t think for a minute it was because I focused on it. Like everyone else, I couldn’t see it. I just made sure the spots around the eye were in focus when I tripped the shutter.–Gary L. Parr, www.gparr.com, www.reefthreads.com