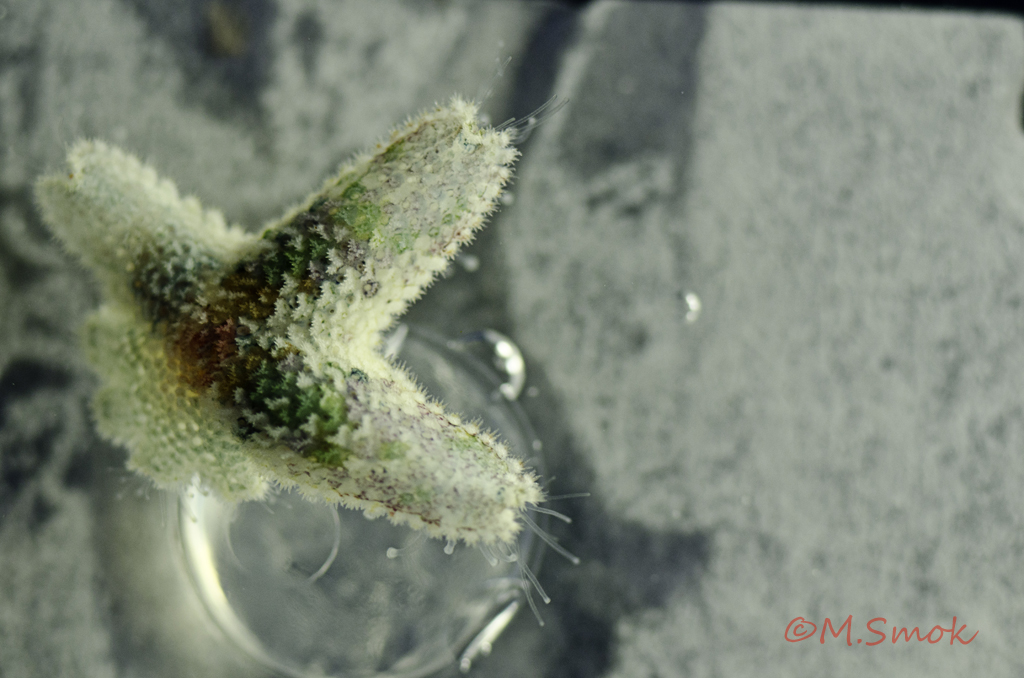 I’m reporting from an ongoing battle that started few days before the Spring swap. My aquarium was in its high peak, every citizen of that little coral nation seemed to be going on with its life and there was no sign of any distress in its structures. But, as I soon would find out, it was just a calm before the storm…

A little history before we move to identify the enemy. I’ve been keeping a reef tank since January 2010. I’ve tried to do everything as planned, and after many months I could say most of the plan went well. But that’s not important right now. A few weeks after I set up the tank, new residents started to appear in my little piece of underwater world. I still remember the day I first saw a little clam that crawled from from somewhere in the darkest corners of the live rock. Then a new little invertebrate appeared out of nowhere- a small starfish! I was very excited seeing such a odd-looking living creature (I came from the freshwater side of hobby, where there are no starfish), then fascinated by the way it slides on the glass, and finally I started to get concerned about its place in my aquarium. “Friend or foe?” I asked myself, memorizing horror stories about fish-eating mantis shrimp, assassin crabs, stinging anemones and other non-reef safe animals that can crawl from the live rock in its process of curing. So I started my research…

It turned out that approximately 7 out of 10 people (of which at least half were being considered as an experienced and reputable aquarists by their communities) who kept them, never had any problems with them. Two out of ten reefers warned that some of them may eat zoanthids. That remaining one person had, or at the time was having, an issue with them. I calculated the risk and let them stay, partly because they were so small and innocent looking, and partly because they fascinated me. Also, I was proud they stood alive in that immature tank I had.

As time passed, that one Asterina starfish I had spotted earlier multiplied. Then I constantly noticed more of them, although never in alarming numbers. They didn’t bother me at all; I found them cute, rather than anything I should be concerned about. They stuck to my rules and played modern citizens, but what I didn’t know is that at night they were secretly conspiring by candlelight (sort of). Then, that sad day of April 6th 2011, I realized there was something wrong with my beloved “Rose nebulas” zoanthid colony. Some of the polyps were completely closed, others had dark grey marks in their centers. Moreover, there weren’t as many polyps as I used to see. I was suspicious, but decided to sleep it over and examine my tank the next day. The next day, as a routine when coming home from work – I run to the tank… and found even more zoanthid colonies and frags affected! A close inspection revealed what I’ve never thought would happen: UPRISING!

Let’s do a quick briefing about the enemy, shall we? I did my research and it appears that there are 26 genera in the family Asterinidae, and many of them can be distinguished only by a specialist. With such a diverse group comes varied food preferences. The enemy I’ve been dealing with is identified as Asterina wega, sometimes called Fiji Asterina starfish. Here’s a couple of pictures of the guilty pest I took after I interrupted its expensive (at least for me) dinner and put it in a temporary jail facility. 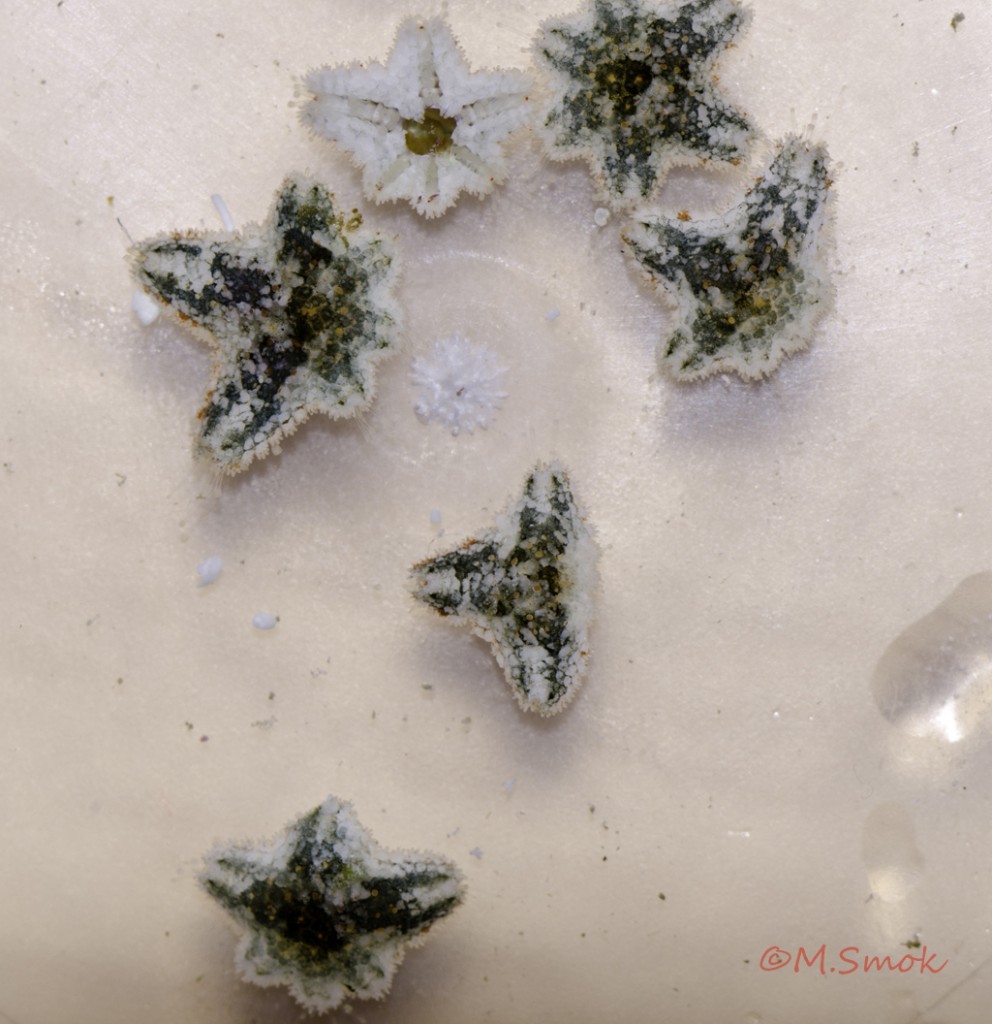 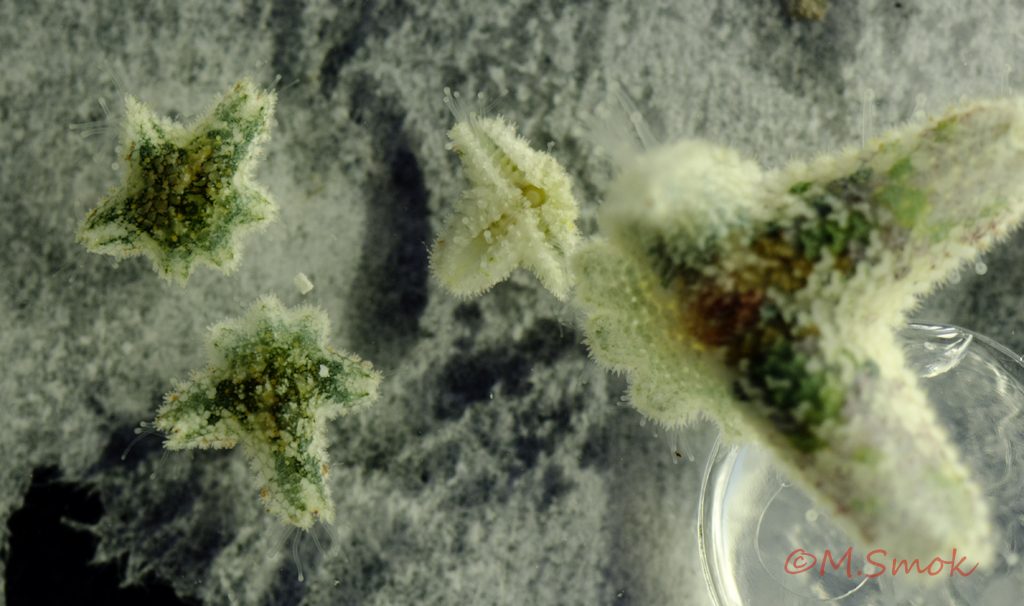 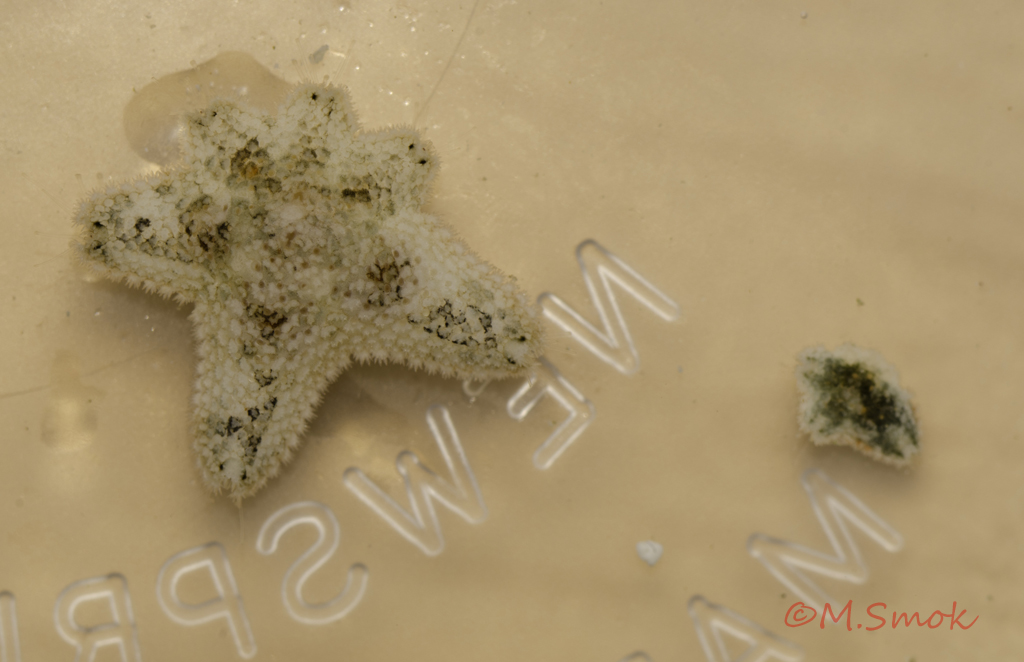 I read reports from other battles and claims about physical differences between the reef safe Asterinas and the ones that eat zoanthids. Some say it’s the green ones that are bad, some disagree and blame the tan colored ones. That identification proved to be inadequate in my case, where I’ve caught and removed at least three different color varieties of that pest starfish. Size doesn’t seem to matter either. I can see that the larger ones are more efficient with destroying my underwater garden than their smaller comrades.

I’m still learning the enemy’s tactics, but I can tell you a few things I observed so far: Asterinas are fast, really fast. And I’m not talking about their ability to move, I’m talking about their appetite for zoas. They’ve turned my colorful, fully open colonies and frags into dark, half-closed caricatures in a matter of days. Some of them are still open, they’ve just lost all their colors, others are half eaten. However, asterinas seem  to leave some morphs alone, which leads to the question “Why?” I can confirm that both palythoa and zoanthid species are vulnerable to their attacks, but some of my zoas seems to thrive like nothing happens. For example, none of the so called “killer palys” have been affected by the starfish, and we know those palys have very strong palytoxin in their tissue (I’m sending you to read a great James Passantino article about palytoxins in the lastest Reefs magazine issue), so it could be that Asterinas sense the palytoxin and don’t take the risk eating them. Anyway, this is a good subject for further investigation.

Second observation: Asterinas work in groups. Before the invasion I saw maybe 3-4 of them a week and almost always on the glass or overflow box, but right now they seem to be coming from everywhere.

Here are a couple of pictures of before/after the invasion. 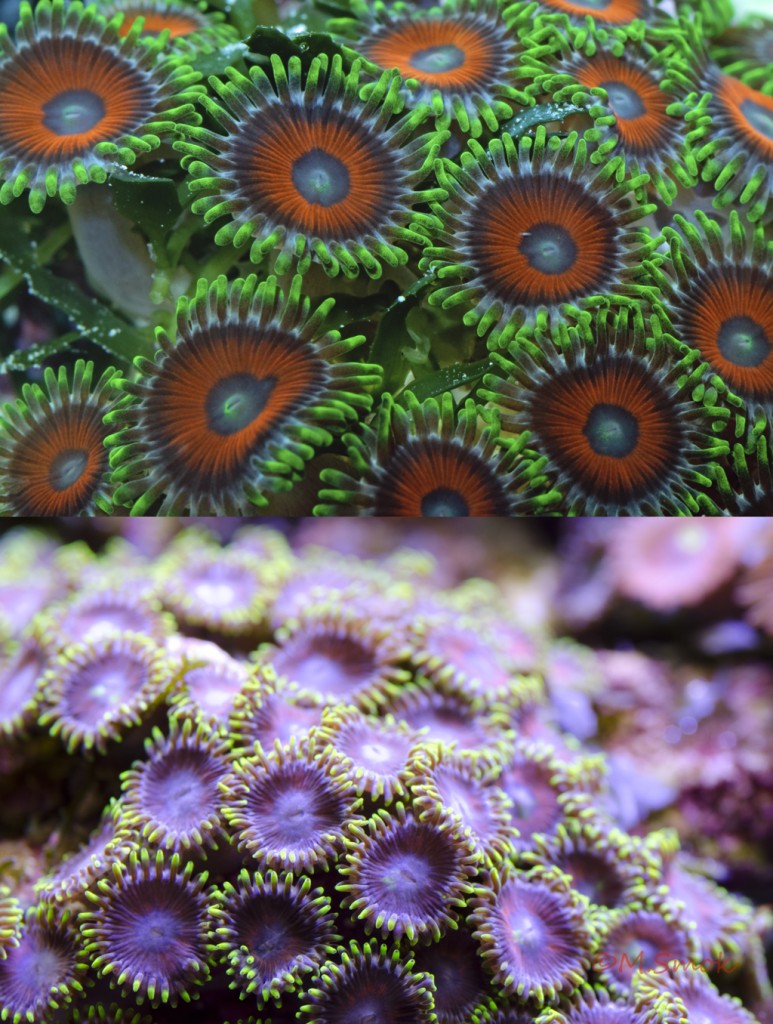 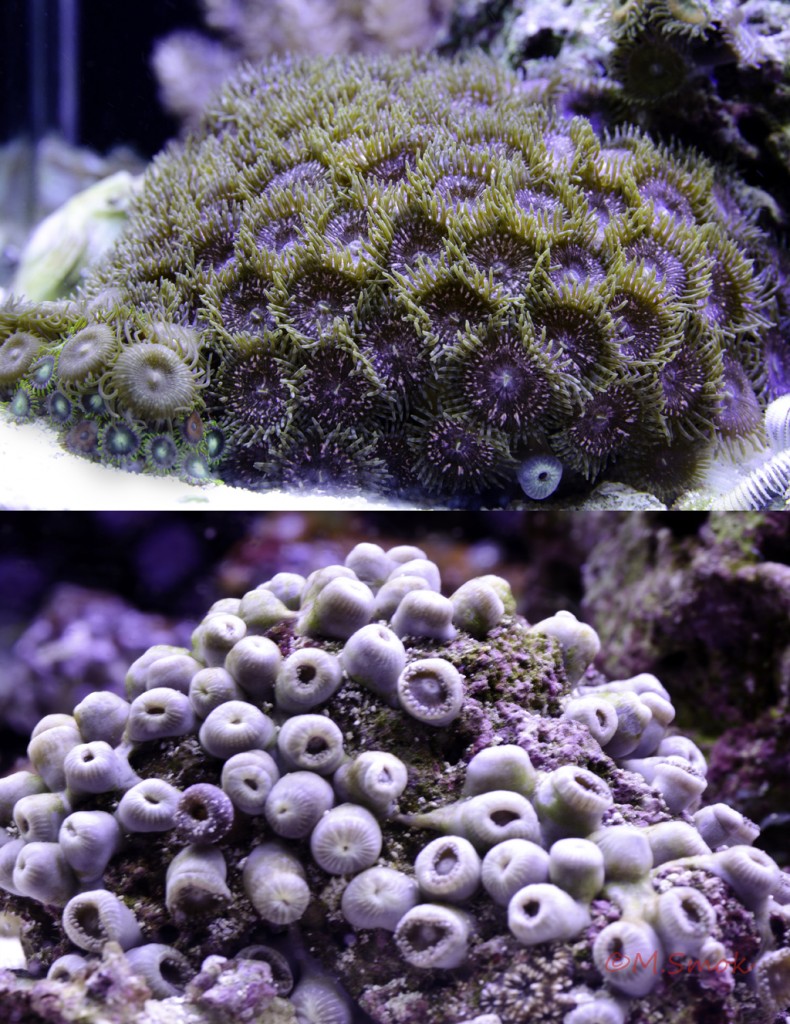 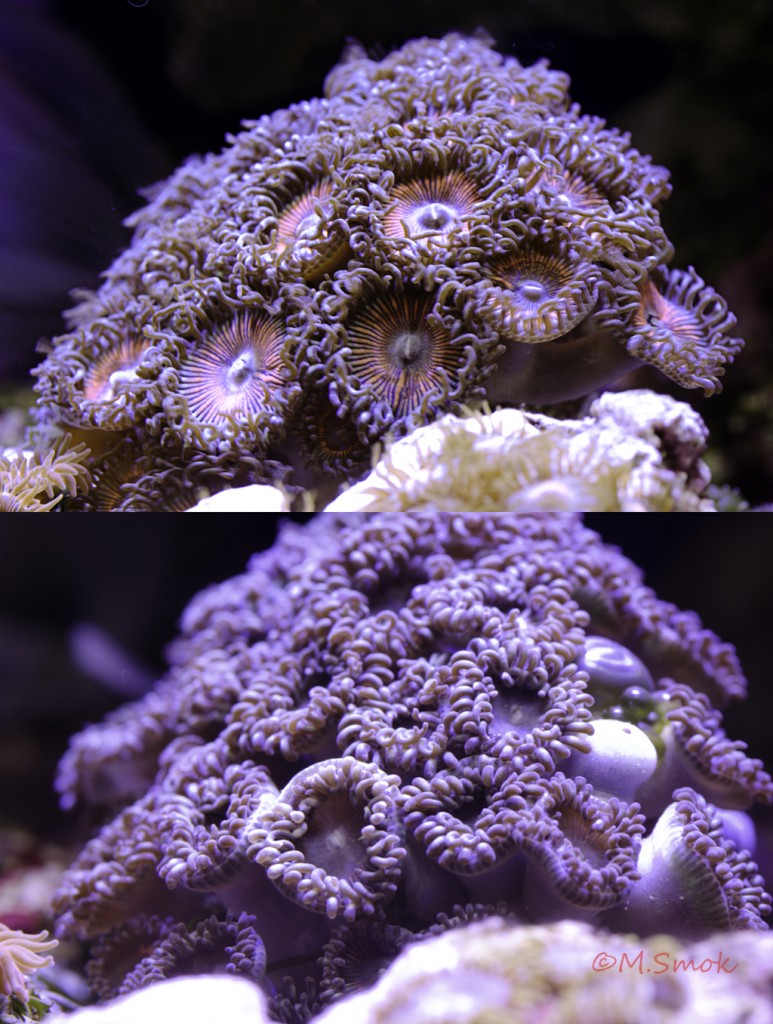 5 days after I started to see zoanthids disappearing, almost all of them are affected by the pest starfish. I knew I had to act fast so I asked the elders (read: fellow reefers with more experience) for advice and prepared myself for counter-attack…

Which leads to part two : WEAPONS OF WAR  Coming soon…