Zoomark 2017 International, Now Until May 14 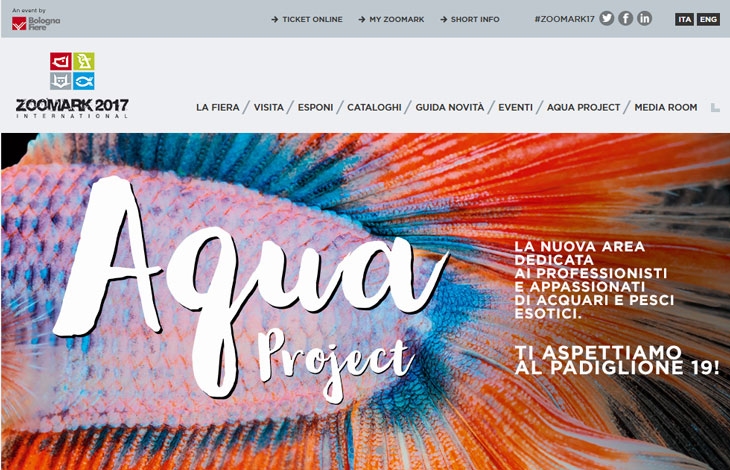 Zoomark 2017 is underway, alternating as usual with the Nuremberg Interzoo.

This year is the 17th edition; it’s being held at the Bologna Fiere complex from May 11th to May 14th.

This important and international event hosts companies, service providers, publishing houses, and others that are involved in the pet industry, all of whom will use this successful international stage to show all their latest news and products.

We at DaniReef will be attending the event, and will work hard to bring you the best new news from the Aquaculture world. We’ll try to visit all the companies that are attending, especially the new Aqua Project, in area 19, which has been heavily advertised by the organizers: it’s a booth completely dedicated to the aquaculture, and we expect it to be spectacular.

From 2009 to 2015 the aquaristic companies participating at the event had dropped, as we have mentioned in previous articles: 2009, 2011, 2013 and 2015. In addition, it’s very difficult to search the exhibitors on the Zoomark 2017 official site. This link should lead us to the list of the exhibitors, but if you do a quick search for the companies interested in aquariums, you’ll see that the list is incomplete. We had to search the exhibitors one by one. We apologize in advance if we missed any exhibitor.

Companies on the site with an asterisk are present only at distributor booth, so we didn’t mention them.

We’d also like to mention, even though they’re not exactly exhibitors:

That certainly will be a booth to see and photograph.


The event has a thin list of aquaristic companies and without the most well-known ones. In fact Elos, Reefline, Aquatronica, LGMAquari, Aqua Medic, Askoll, Tetra, Sera, Anubias, Ceab, Newa, Eheim, Hydor, AGP, Planctontech, Teco, Equo, Aqua1, Carmar, and Xaqua, won’t partecipate. However, we’re pleased to see that sicce, Tunze, Aquaristica, and Ocean Life have returned and they were absent in the previous editions.

We will go in order to tell you what we witness.

We remind you that the access to Zoomark International 2017 is only open to professionals in the industry, so the public isn’t allowed.

If any company has been added to the exhibition after the publishing of this article, please inform us and it will be promptly added (and visited).