Save the Pacific Northwest Tree Octopus!

An intelligent and inquisitive being (it has the largest brain-to-body ratio for any mollusk), the tree octopus explores its arboreal world by both touch and sight. Adaptations its ancestors originally evolved in the three dimensional environment of the sea have been put to good use in the spatially complex maze of the coniferous Olympic rainforests. The challenges and richness of this environment (and the intimate way in which it interacts with it,) may account for the tree octopus’s advanced behavioral development. (Some evolutionary theorists suppose that “arboreal adaptation” is what laid the groundwork in primates for the evolution of the human mind.) 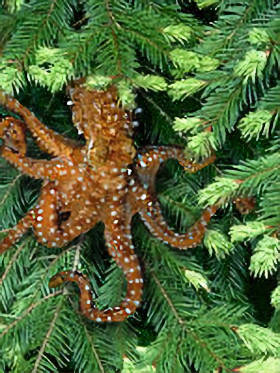 Reaching out with one of her eight arms, each covered in sensitive suckers, a tree octopus might grab a branch to pull herself along in a form of locomotion called tentaculation; or she might be preparing to strike at an insect or small vertebrate, such as a frog or rodent, or steal an egg from a bird’s nest; or she might even be examining some object that caught her fancy, instinctively desiring to manipulate it with her dexterous limbs (really deserving the title “sensory organs” more than mere “limbs”,) in order to better know it.

Although the tree octopus is not officially listed on the Endangered Species List, we feel that it should be added since its numbers are at a critically low level for its breeding needs. The reasons for this dire situation include: decimation of habitat by logging and suburban encroachment; building of roads that cut off access to the water which it needs for spawning; predation by foreign species such as house cats; and booming populations of its natural predators, including the bald eagle and sasquatch. What few that make it to the Canal are further hampered in their reproduction by the growing problem of pollution from farming and residential run-off. Unless immediate action is taken to protect this species and its habitat, the Pacific Northwest tree octopus will be but a memory.

The possibility of Pacific Northwest tree octopus extinction is not an unwarranted fear. Other tree octopus species—including the Douglas octopus and the red-ringed madrona sucker—were once abundant throughout the Cascadia region, but have since gone extinct because of threats similar to those faced by paxarbolis, as well as overharvesting by the now-illegal tree octopus trade.