This is my first saltwater tank. I’ve done freshwater for about a year and a half and I decided it was time for me to take the next step! I decided on the 120 gallon tank because I thought it was a decent starting size and I am someone who doesn’t like to upgrade and deal with tank breakdowns later on. After searching many manufactures, I settled on SC aquariums from California. Their price tag-850 for a pre-drilled eurobraced tank was amazing and free shipping too! 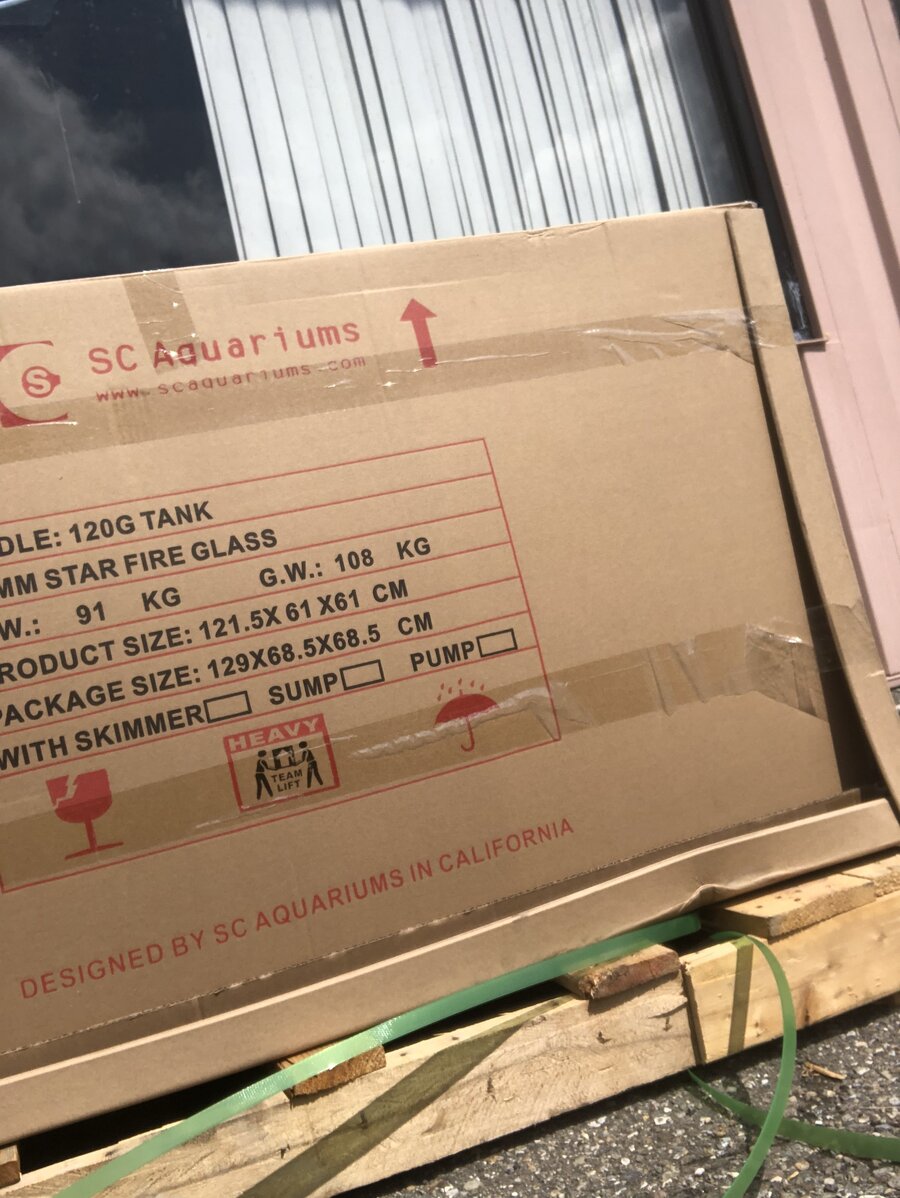 I had to get a couple of my friends to help me transport this tank due to the weight. Could barely get it into the back of my car to transport it .The tank looks amazing when I opened it up andi inspected for cracks and scratches and found nothing

At this point, I decided to build my own stand instead of buying it. I trust 2x4s more than the particle wood a lot of companies use and this was much cheaper than having one made. I went to Home Depot and bought the wood, the wood stain as well as polyurethane. I gave it two coats of wood stain and 2 more of polyurethane to waterproof it. 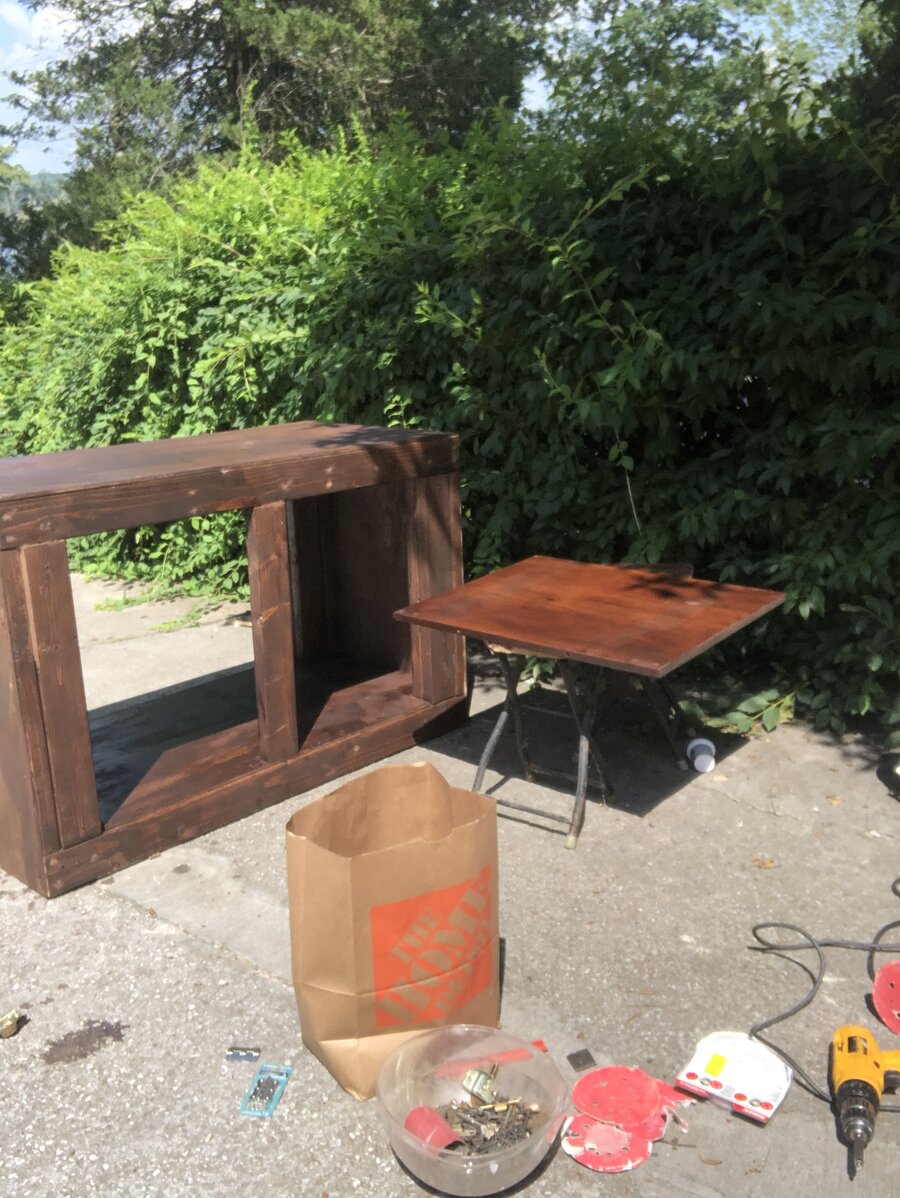 After building the stand, my next step was the sump. I looked at the prices of premade sumps and while they looked visually appealing and the build quality was very nice, the price point was just too high for me so I decided to make my own. I bought a 40 gallon breeder from petco during one of their dollar per gallon sales and visited a local glass shop for glass baffles. I had the glass baffles cut for me. I decided on a very simple sump design-first chamber being the protein skimmer, 2nd chamber for a refugium, and the third for the return section with the ato container built in. 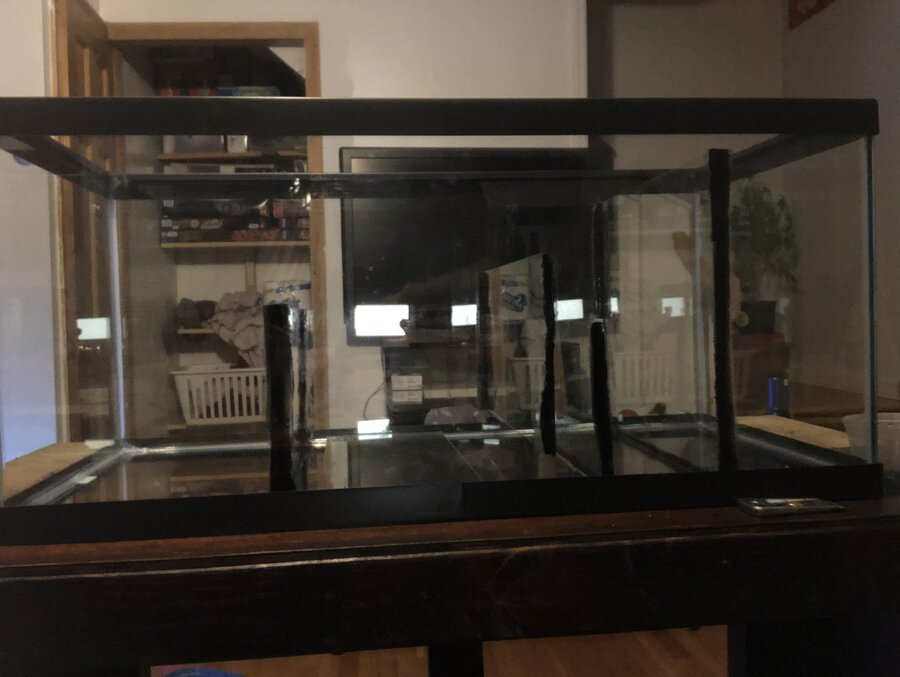 The silicone job was pretty bad because the tube exploded in the process and I had to do the whole thing by hand Overall I’m pretty happy with the sump and it gave me plenty of space to work with. I think I spent around 150 on the sump in total-definitely better than the 400-600 on premade acrylic sumps.

At this point my next step was to make my aqua scape. I settled on using dry rocks and decided to go with a NSA styled aqua scape. I bought 100 pounds of rocks and broke them into smaller pieces. 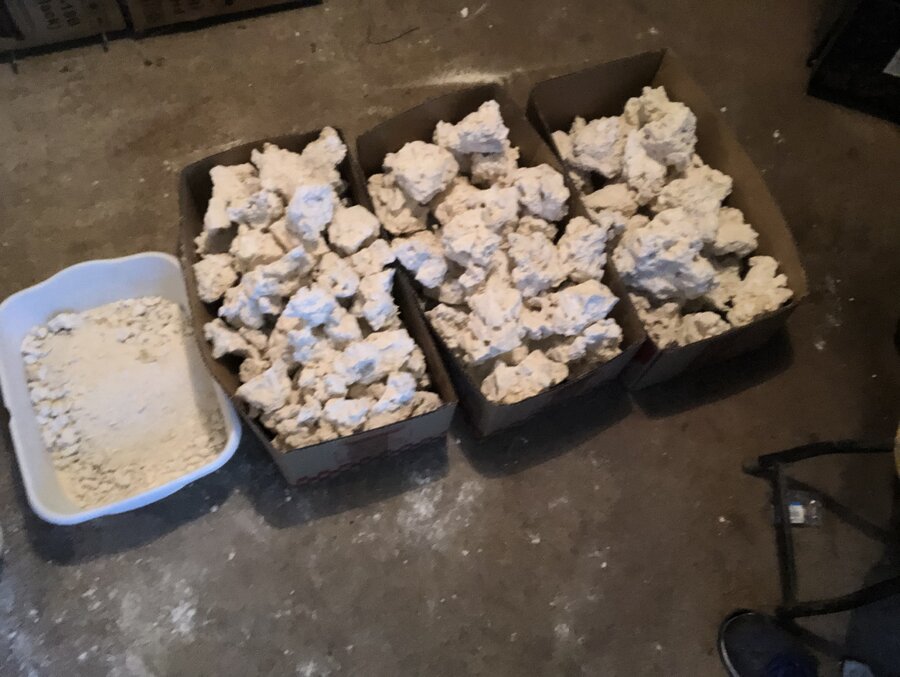 I separated the rocks by sizes and bought 2 pounds of super glue gel, 1 pound of super glue and a bucket of emarco mortar. The process was long and tedious with some pieces coming off due to me not glueing them down properly. I first used the super glue gel to glue the rocks together for a temporary bond, giving me time to use the mortar to give it a more permanent bond. After the mortar dried, I used a mixture of sand and regular super glue liquid to further strengthen the bond of the joints and also to hide the color of the joints left vt 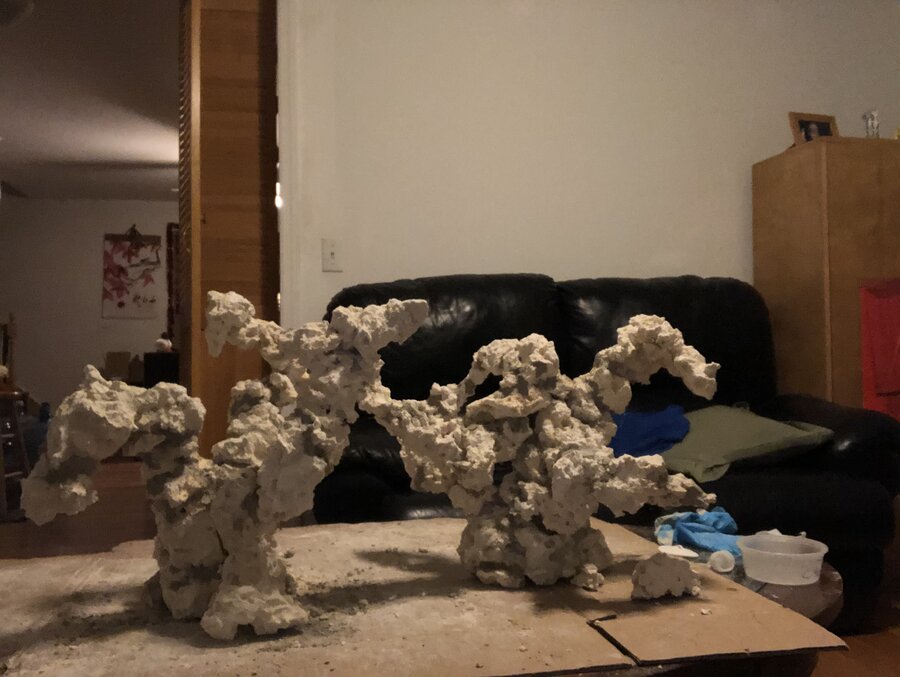 I was very happy with the end result. 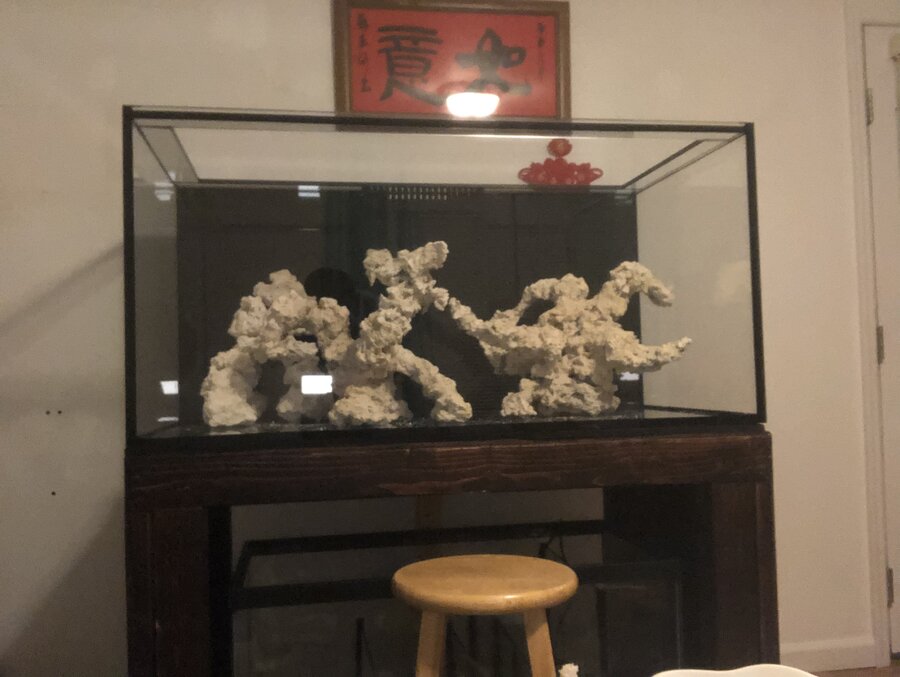 The next step was to do the plumbing. I debated between soft and hard plumbing but decided to go hard pvc in the end because of the more permanent and durable nature. I took everyones advice and added a lot of unions. My tank is pre drilled with three holes-one drain, one emergency, and one return. I decided on the herbie overflow. I also settled in the reef octopus Vario 4 return because of the amount of reviews on how durable and quiet it was. I have to say, I can’t hear the return pump even when I put my ear to it! 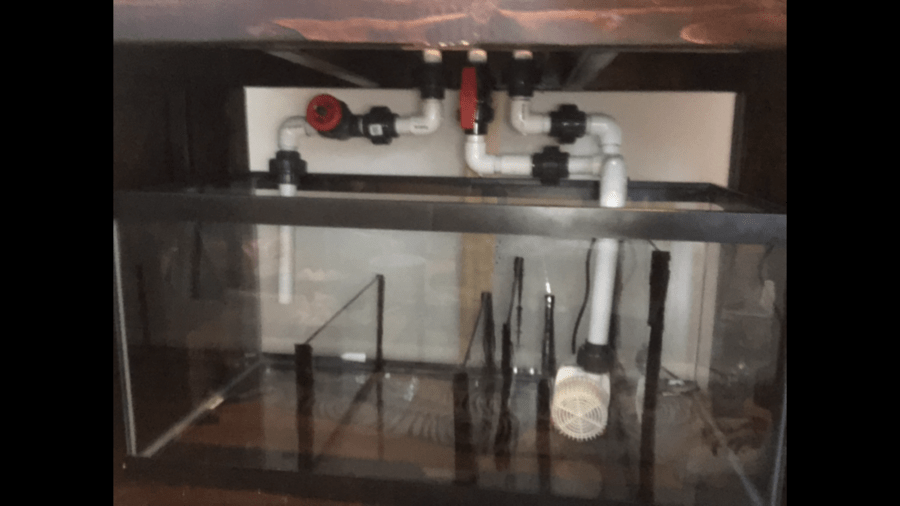 There was initially a leak but after tightening the bulkheads, the leak stop and the system ran fine during the leak testing.

At this time, I had to decide what equipment I would like for the tank. First I bought a tds meter to check what my source tds was to see what stage rodi was. To my shock it was over 650! I settled on the brs 6 stage rodi and I have to say it was a good choice and I love the 2 stage di because I always forget to change out the resins on time. I had to weld a gate valve on my pipes in my basement to set it up. Also got a aquatic life booster pump because of low psi. It brought it from 40 to 105! 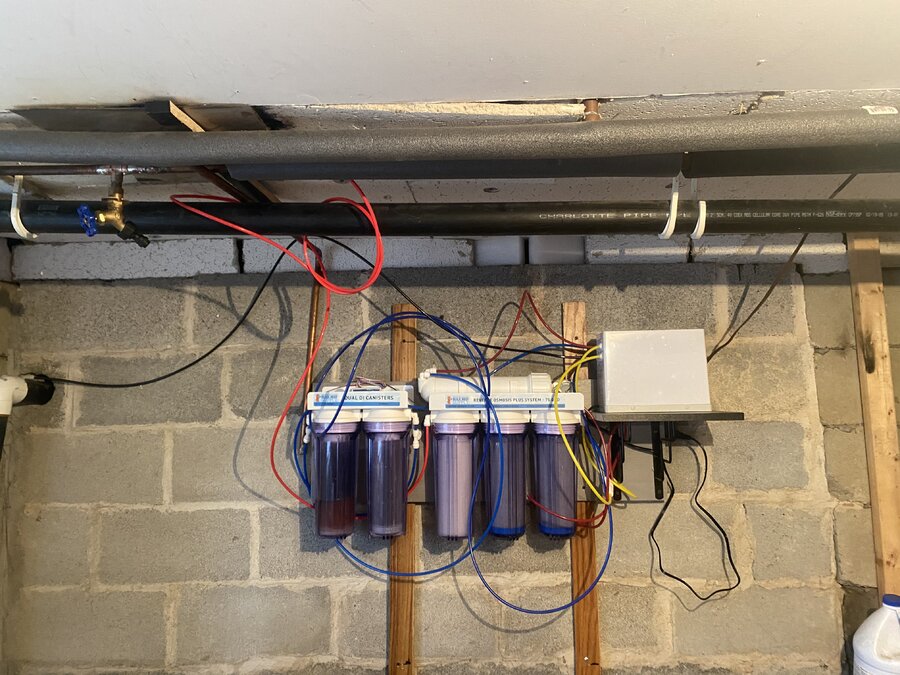 I had originally wanted to go cheap on the system but that idea has since been thrown out the window. For flow, I settled on 2 mp40s for the side and 2 smaller tunze pumps in back to Keep detritus off the sandbed.

For testing I bought the alkalinity, phosphate and nitrate checkers from Hanna Instruments. Especially love the alkalinity checker because of how fast it is although I have no need for it yet because I don’t have Corals yet.

For heating, I went with 2 brs titanium heaters (300 watts) and a Eheim jager (200 watt) to help out because my house is especially cold. The two titanium heaters are being controlled by a inkbird temp controller set to 78 degrees and the Eheim heater is set to 76.

For my ato system, I went with the tunze osmalator 3155 because of its countless reviews on how reliable it was.

For my protein skimmer, I decided on the simplicity 240 dc skimmer. So far it has worked very well on pulling skimmate.

Some of the more miscellaneous items I bought were micorbacter 7 and seachem stability for the cycle, fish food, the Hanna salinity checker, tunze algae magnet and a carbon reactor along with a gallon of brs rox .8 carbon. 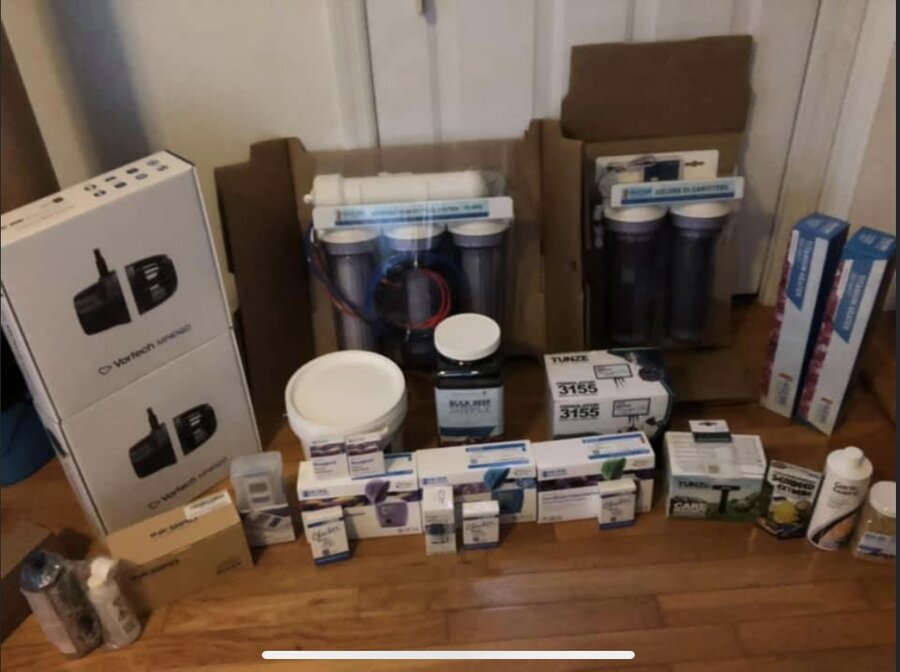 Here is what my sump looked like after everything was set up and running. I haven’t added the doors yet 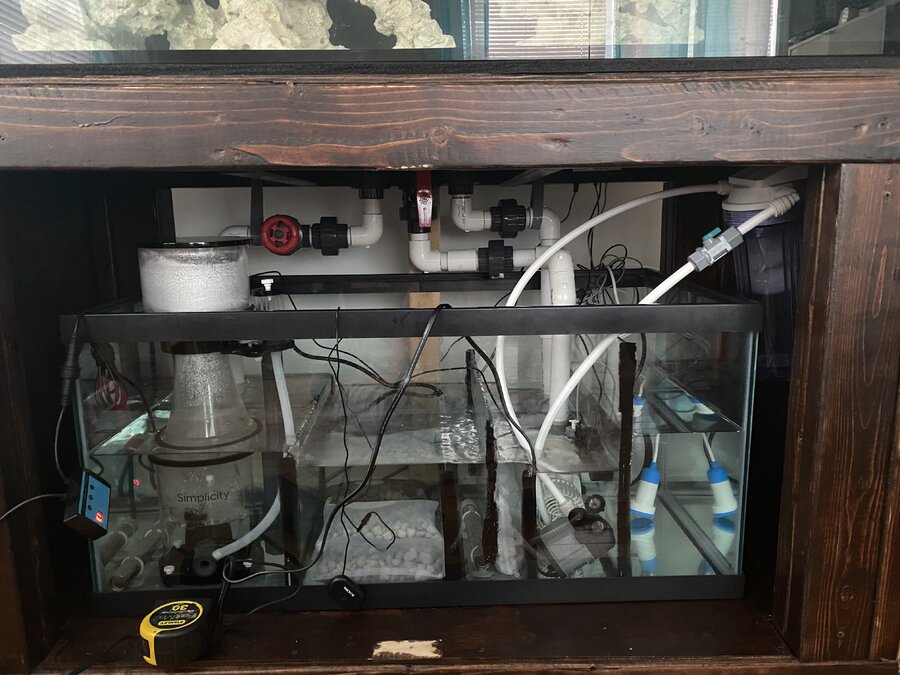 At this point I realized I had a “small” wire problem. I didn’t anticipate the amount of plugs and wires and the Medusa head of wires next to my tank grew pretty large.

I decided that I was going to build a controller board on the wall to deal with it and I also took the opportunity to build another cabinet underneath for when I will be doing two part and other things. 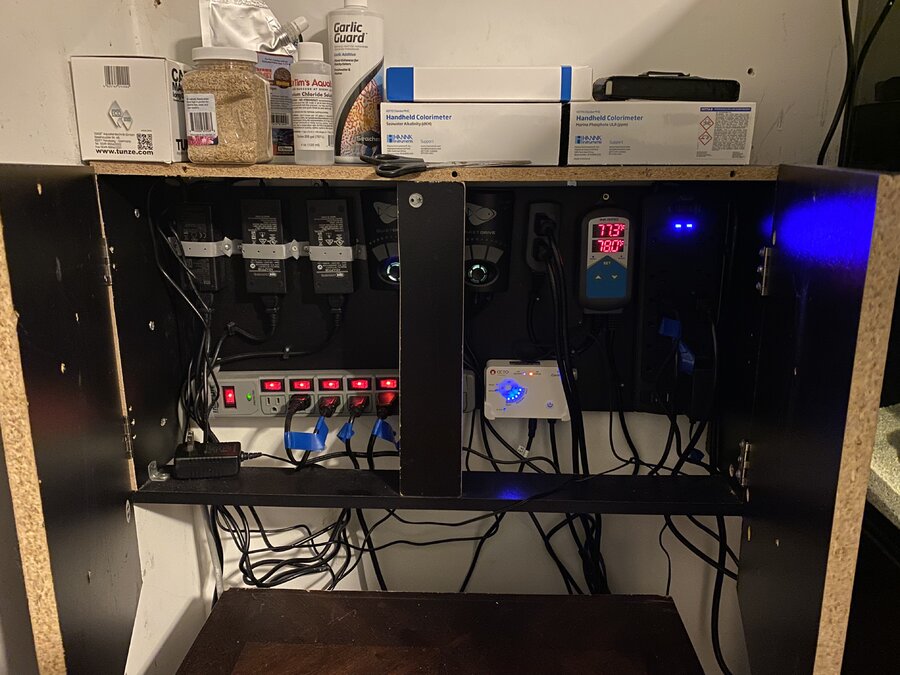 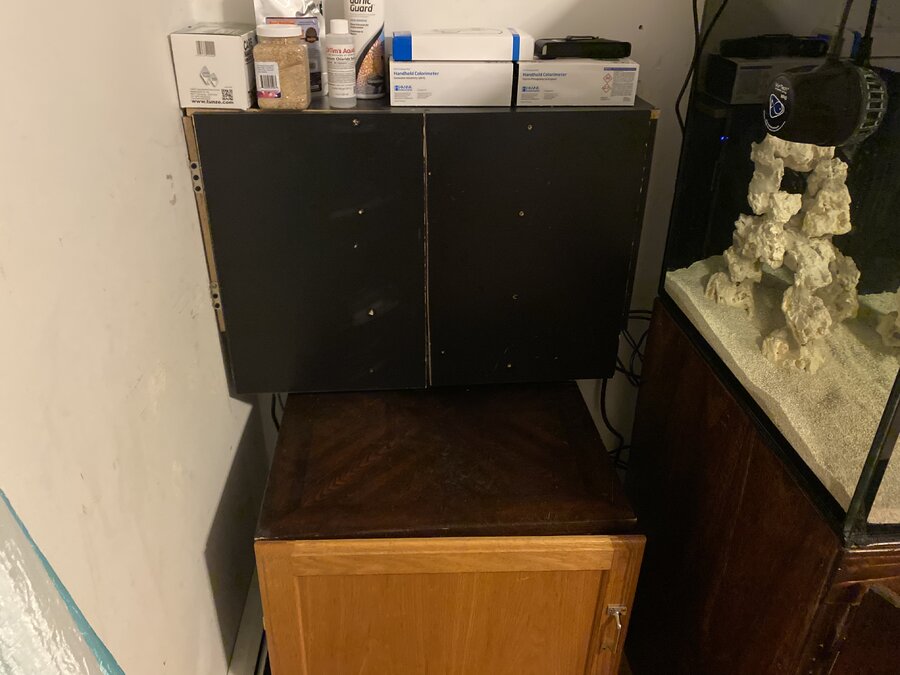 I think it hides the wires really well and I am very happy with it. I also added some lights to my tank for when I need to do maintenance. I just used one of my extra lights from my planted freshwater tank. 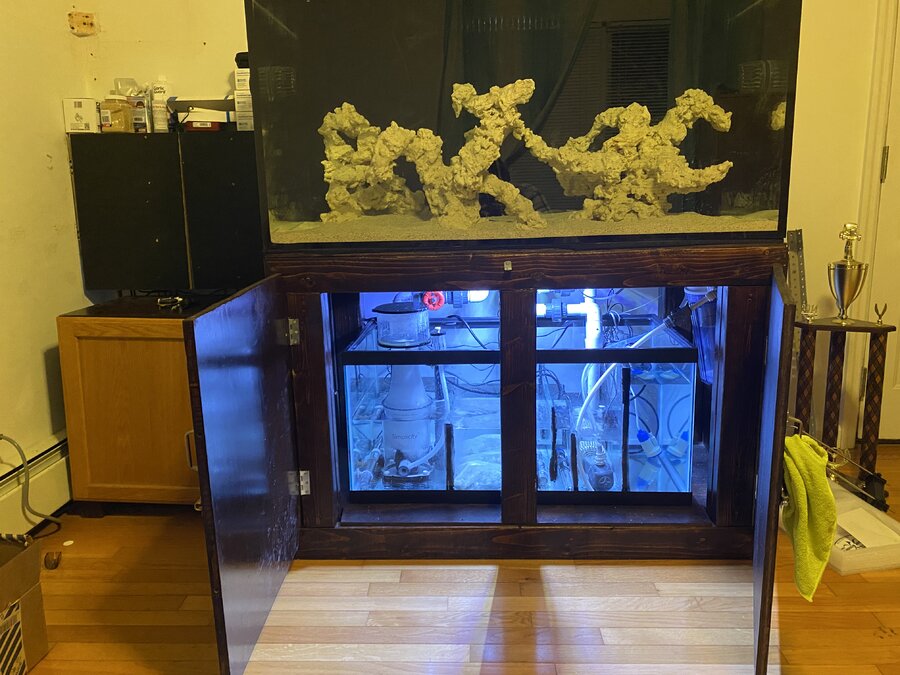 Now that everything was all set up, I started the cycle. I started it by doing 2ppms of dr Tim’s ammonia and dosing a combination of stability and micorbacter 7. I didn’t do a water change through the entire cycle-only after it was complete before adding fish. The entire cycle took 5 weeks. I dosed bacteria every day and ammonia about once a week or two.

During the cycle, I was contemplating which lights I wanted. At first I was going to go with radion xr15s. However the high price point drive me away and I bought the Reefbreeder photon v2. 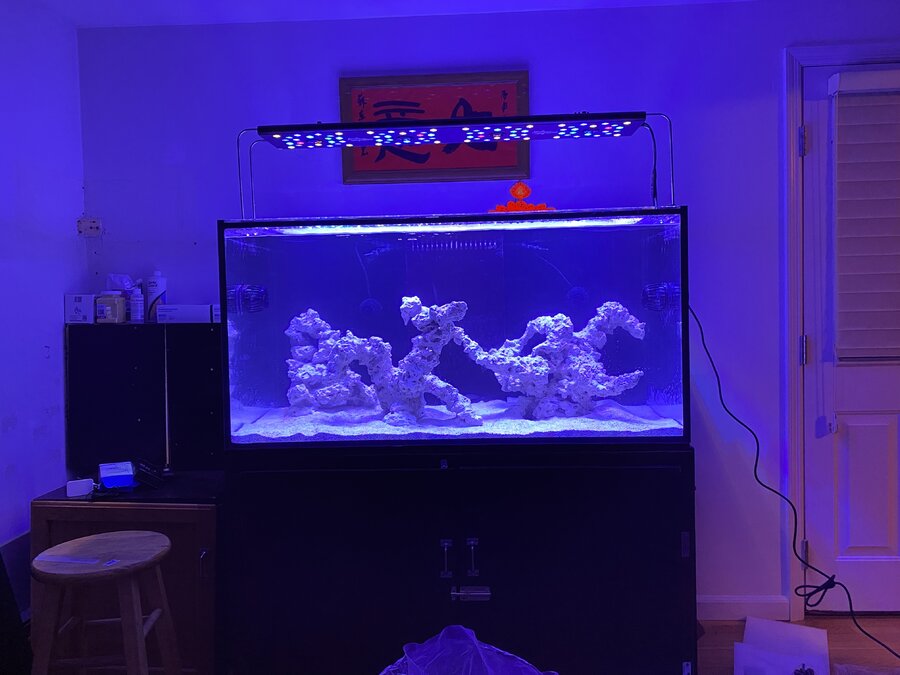 The leg mounts were just temporary, I later hung the lights 16 inches from the water surface.

After the completion of the cycle, I bought two occelaris clownfish from cultivated reef. They were very healthy and started to eat after about 2 days in the tank. However, one of them died after about a week in the tank. I do not know the cause of the death because they were eating fine the night of the death and the both clownfish showed no signs of stress or disease. The surviving clown was also acting completely normal. There was also no spikes in temperature or other parameters so I can only assume it was a mysterious death. 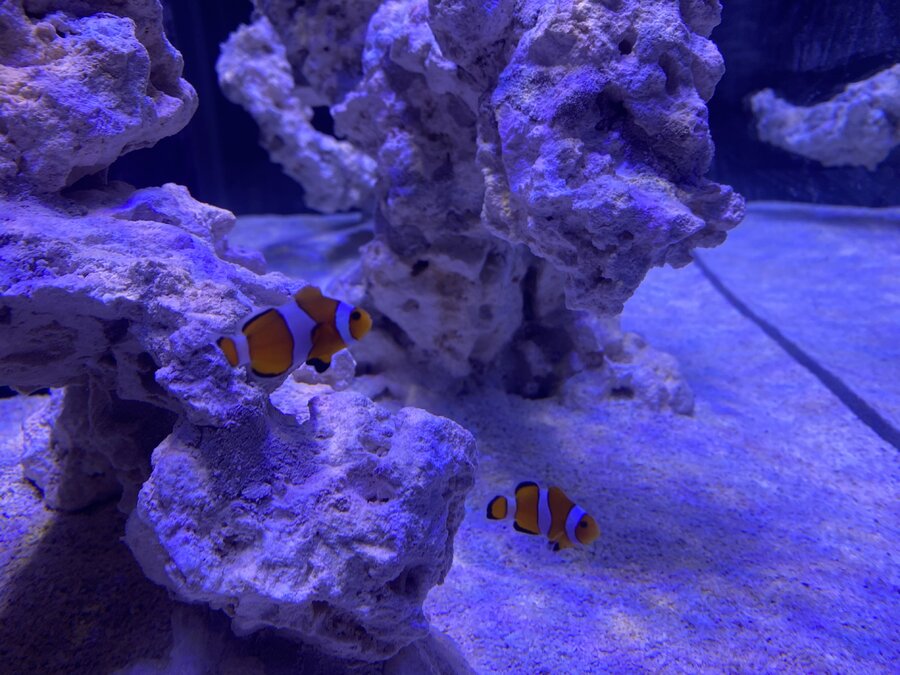 After testing my water to make sure the death wasn’t because of an ammonia spike and to make sure my water parameters checked out, I decided to get a one spot Foxface to get ready for the ugly stage. 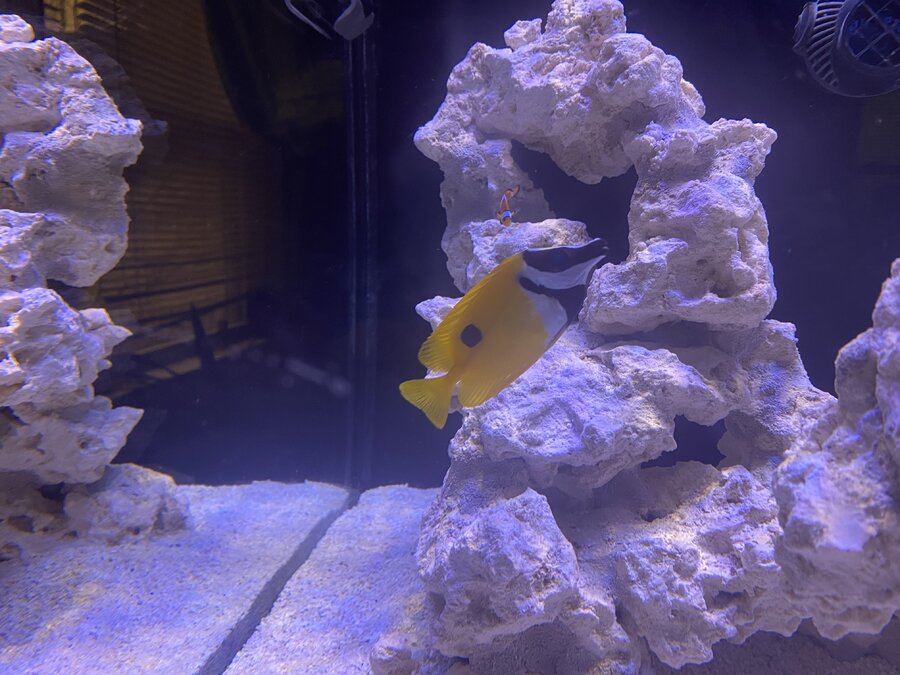 The foxface was very healthy. I asked for it to be fed in the lfs and it ate like a pig. It also started eating as soon as it was added to the tank. Right now I feed 2 times a day, a quarter of a cube of frozen mysis each time and I also supplement the Foxface with nori every other day.


Around 2 weeks after the fish were added, I had the first signs of diatoms

Needless to say, it got bad real fast 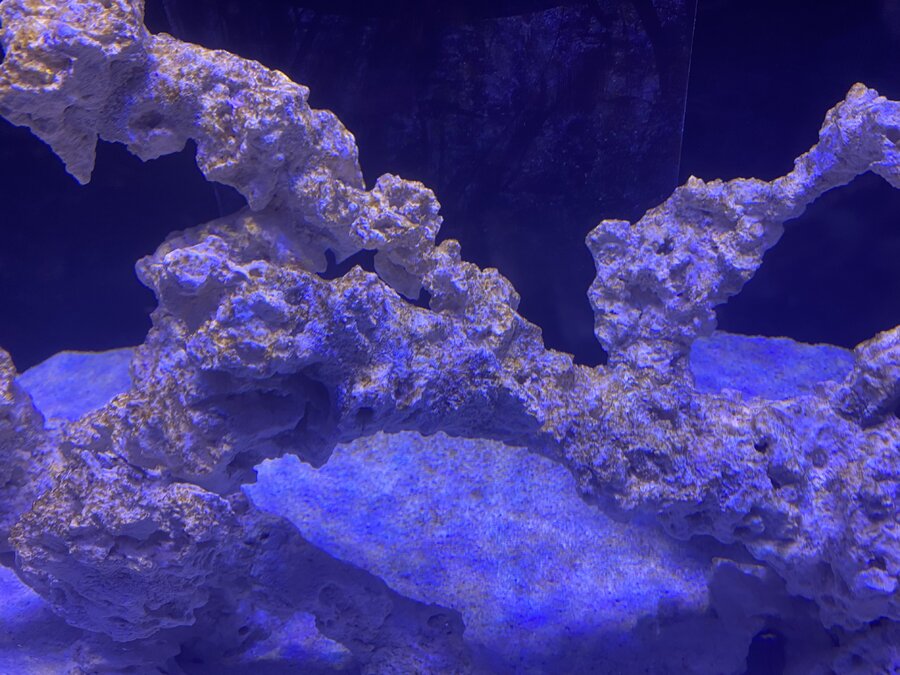 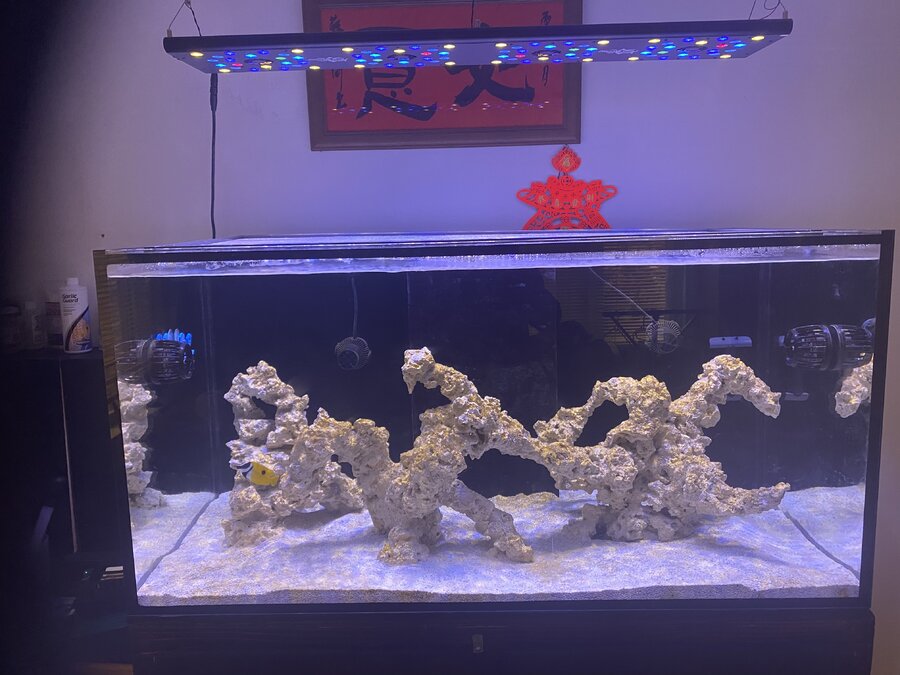 To help out, I decided to buy some snails and crabs from reef cleaners, they should arrive this friday and help with the diatoms.

Overall I am very happy with the results so far. The entire tank build process took about 5 months, the cycle 5 weeks, and the fish have been in for around 4 weeks now. The Foxface and the clown are both slightly bigger and eat very well. There has been no problems so far since the original clown death a few weeks ago

Hey, nice tank and writeup. Good luck with the tank. I was hoping to see a pic of the tank in your car though lol!

NL146 said:
Hey, nice tank and writeup. Good luck with the tank. I was hoping to see a pic of the tank in your car though lol!
Click to expand...

The one picture I forgot to take. It was a pain to lift that in the car and then we had to carry it up these stairs because my house is on a hill

Here is agood link by reef experts on how long it really takes to cure dead rock. Please take him seriously. I saw him speak this year.