By Dominick Cirigliano 11 years ago5 Comments

One of my favorite fish is the Fantail Filefish (Pervagor spilosoma). It originates from the eastern side of the pacific (mostly around Hawaii). Many of the Hawaiian locals call this fish the “Leopard Filefish.”  You can see clearly why in the picture below. 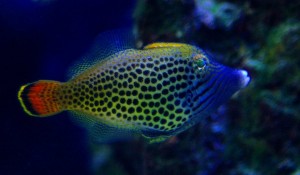 These fish tend to be aggressive with similar and the same species. I’ve had great success getting them eating prepared foods. It seems they are willing to try anything including ornamental shrimp and may even “taste” corals. I’ve seen them test bite just about everything. They grow to a max of about 7″ but I think their activity level warrants a larger tank for them.

My favorite thing about these filefish (other than their appearance) is how active they are. They constantly are swimming around the tank and through the rock work. Definitely one of the most entertaining fish I’ve kept.

The real mystery of these filefish is the episodic spawning they engage in. Once in a while (timing is not really known) this fish is found in overwhelming numbers in the shallows of Hawaii. Many of the fish are preyed upon or wash up on the beaches dead. This spawning occurrence was particularly peculiar in 1944, 1975 and 1982-1987. This is when millions of the fish gathered. It’s not known what triggers the event or what the rationale for it is. 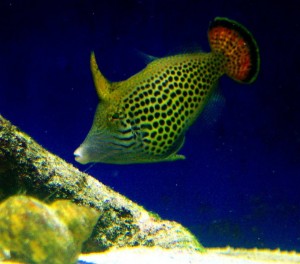 I’ve wanted to breed these fish in captivity although it seems unlikely even though I did experience a spawning of a similar species, Pervagor melanocephalus. Hopefully, in time, I’ll be posting a blog about my Fantail Filefish spawning. 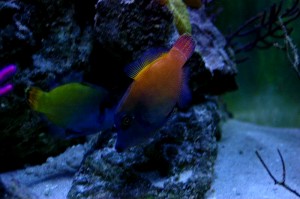