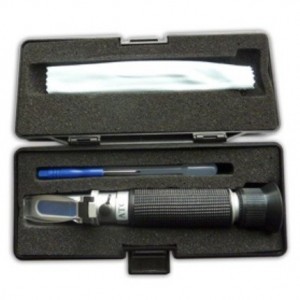 Today I managed to get some hands on time with D&D’s new seawater refractometer. For those of you who haven’t heard about it yet, it’s the only true “seawater” refractometer on the market, and it gets this designation due to its range. To be considered a true seawater refractometer D&D only gave this instrument a range from 1.020 to 1.030 which should remove some error from its use as well as give a little bit more accuracy. All refractometers are tuned to be most accurate closest to the range they are designed for, so they should be calibrated with saline solution at near 1.025. By not giving more range than this, it takes the option of calibrating with RO out of the equation. By focusing on a narrower range, they should also have fine tuned those optics that much more and should get better accuracy for it. I compare it to camera optics in that a fixed focal length lens almost always yields better quality than one built to cover a broad range.

Lets get to the fun part. Unpacking the D&D refractometer shows something I’ve seen before many times. In short, it looks just like most on the outside other than the nice addition of a small lanyard on the adjustment screw cap. Looking through the optics however gives a completely different feel. The range is very tight, and because of this it is larger and easier to read than most. It does seem a little bit dimmer than my usual instrument, but not enough to be of any consequence. The seawater refractometer comes in the usual small plastic case with included pipet and adjustment screw driver. 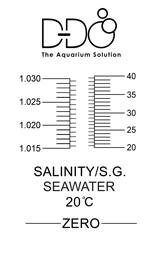 For testing I couldn’t think of anything better than a head-to-head against my tried and true refractometer (SWC.) I started by calibrating both with some 1.025 calibration fluid. The D&D tunes in easy, but has a slight rebound towards the high end. After getting a feel for it, it was no problem to get it giving consistent results. I tested both refractometers at 1.020, 1.025 and 1.030 and came up with the same results on both every time. After seeing the rebound while calibrating, I was a little concerned about the optics staying consistent, so I added in a few bumps and taps and retested again. The D&D stayed true through it all. It may not be a big revolution, but when it comes down to it, this new refractometer works well.