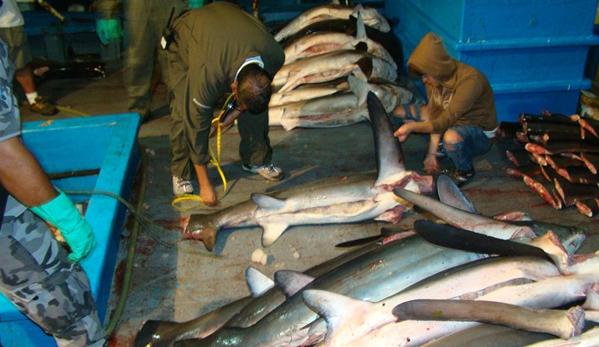 Sharks are amazing creatures and I have been fortunate enough to have personally worked with several species.  They’ve held my fascination for years and I can’t learn enough about them (I used to be able to rattle off respiration rates for some of the more commonly kept species).  The following should be viewed as bittersweet and I’ll explain after.

The Galapagos Islands were declared a World Heritage site in 1979 by the U.N. and the National Park covers the entire island chain.  However, this past Monday night 30 individuals were apprehended more than 20 miles inside the park limits by both park rangers and an Ecuadorian naval vessel.  A search of the vessel yielded 357 dead sharks presumably caught for their fins to be exported to Asia.  Among the carcasses were 286 Bigeye Thresher Sharks, 40 Galapagos Sharks, 22 Blue Sharks, 6 Hammerheads, and a single Mako.  Quite the haul for the poachers who were easily caught in their rundown boat.  They were also using the practice of “longlining” which is illegal in Galapagos National Park.

This isn’t entirely bad news when you look at it in the proper light.  Recently, more and more people are becoming aware of the dangers that face sharks worldwide.  This means that more and more governments are actively doing something about it and until recently, the GNP didn’t have the ability to do much about acts such as this.  Efforts are being stepped up all over and the rash of seizures is a good sign.  It’s also good that whole sharks were found and not just the fins as the practice is to normally “de-fin” the sharks at sea and toss the still living animal overboard.  The park stated that this was the largest seizure in its history.

As long as there is demand there will always be those who seek to go beyond that which is lawful to turn a profit.  I do believe we can eventually farm certain species sustainably, but individuals such as those mentioned above aren’t making it easy.  It may sound odd, but I do hope we continue to see these stories of foiled poaching cartels as efforts increase, albeit at a diminishing rate.

A message about our advertisments