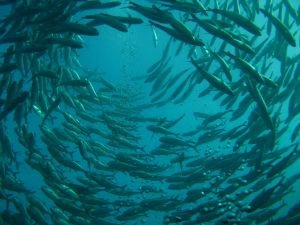 Current wind farm technology has hit the proverbial wall, with efficiency of the current turbine design almost maxed out.  They have to be spaced far enough apart to avoid turbulence from other turbines and this cuts down on the number of turbines in a given area.  Today’s tech puts out an average 2 watts per square meter (on productive sites) of farm land.  At that rate, even an efficient LED fixture for your reef would require a significant chunk of land.  The old propeller-style units have their setbacks but a research team from Caltech has turned to schooling fish to help push wind energy to the next level.

The study is interesting because it combines principles from both Fluid Dynamics and Aerodynamics.  Basically, the new design of the vertical turbines was modelled on the ability of schooling fish to utilize the turbulence from the fish around them to maximize their own propulsion.  By applying what they learned from the fish, the Caltech group was able to increase the output to 20-30 watts per square meter for the vertical turbines (think stack of pinwheels).  With optimization and the “buddy system” turbines placed 5 rows back were still at 95% efficiency and the wind necessary to achieve these numbers is nothing out of the ordinary.  The results were produced with the same average wind found on on farms today.  From the video  on the BBC’s site, the new design looks to be much smaller at just 1/10th that of the current turbines and utilize far less materials, making the cost per farm far less.  The problem they foresee is getting the wind from above the farm (where the old turbines sat in height) down to the new turbines where it could also be utilized.  The new design might not be the exact answer but if it opens up a new avenue to explore we can expect some leaps in wind tech making it a serious option in the near future.