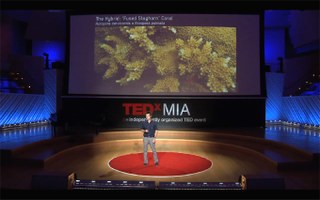 Miami’s waterways aren’t exactly known for being pristine, yet some corals can still survive here.  Colin Foord (a marine biologist and artist educated at the University of Miami and James Cook University, Australia) talks about the most robust coral that inhabit these urban seas – a hybrid between the only two Atlantic Acroporids: Acropora cervicornis and A.palmata – and how the new Acroporid may be key in saving Miami’s coral reefs.  This hybridization is evolutionary biology and diversification in action.