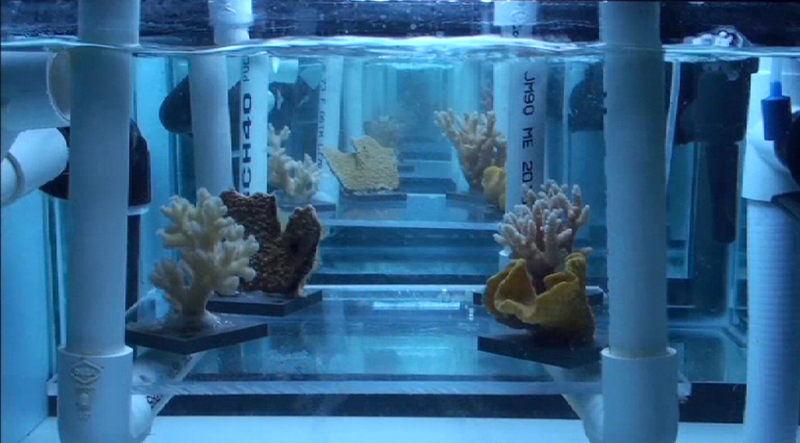 A look through some of the research tanks being used by the 4Coral Research group. Image by American Reef.

A team of scientists from Ohio State University, the University of Delaware, the University of Georgia, and professional aquarists at Reef Systems Coral Farm, Inc., are busy working to improve our understanding of how corals will react to global change. When one thinks of cutting edge coral reef research images of balmy tropical beaches and palm trees likely come to mind, but not this time. Instead, this work is being conducted in recirculating aquaria in New Albany, Ohio, a suburb of Columbus, using a modified approach to the methods most reef aquarists use in their own tanks. Usually there are few opportunities for aquarists and coral reef scientists to talk or collaborate, though the potential for learning from the other group is immense. I really commend all the parties involved in the 4Coral Research team for pulling together a complex project and a collaboration between the public and private sectors, which is often difficult to achieve.

Here you can see Part 1 and Part 2 of an interview by American Reef with lead P.I. Andrea Grottoli of Ohio State and Todd Melman of Reef Systems. Beyond giving a first-hand glimpse at coral reef research, the videos are full of little tidbits that should prove useful to aquarists as they try to get the best results from their own tanks.

I was especially interested to see how other people are approaching these issues as my own Ph.D. research focuses on questions related to those asked by the 4Coral group. There are just a handful of research groups around the world working feverishly to improve our understanding of coral responses to higher temperatures and lower seawater pH. Under a realistic best-case scenario, if we as a global society get off fossil fuels and onto alternative energy sources quickly over the next few decades we might escape with only a 2-3 °F temperature increase and about 0.1 pH unit decrease on coral reefs with a good chance of saving many of them. If we stick with business-as-usual we’re looking at more like a 6-9 °F temperature increase and 0.4 pH unit decrease on coral reefs by the end of the century–essentially game over. Even under the best-case scenario though, it’s likely that we’ll have to play a bit of triage, working to save reefs that are salvageable and not wasting resources on those that are doomed. Work like this helps us to spend our resources wisely, so we end up with something instead of nothing.

Can you eat something bigger than yourself? [video]