Deep refuge ‘can help save our reefs’ 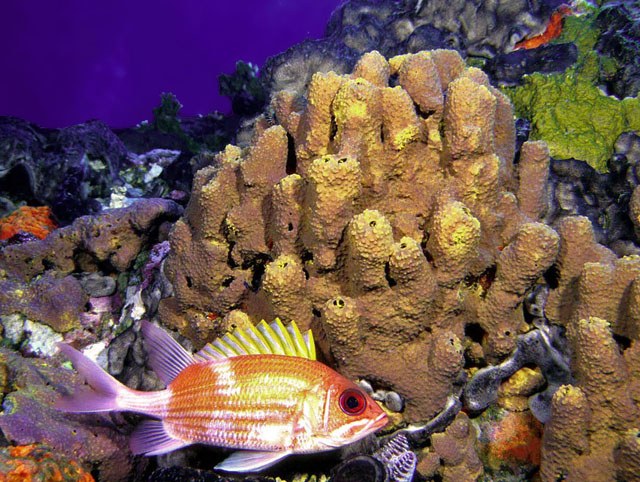 Deep reefs may hold the key to replenishing shallow reefs and their fish stocks. Photo by NOAA

In the journal Nature Climate Change, lead author Dr. Tom Bridge from the ARC Centre of Excellence for Coral Reef Studies based at James Cook University and colleagues point out that global conservation policies have so far failed to prevent the widespread destruction of coral reefs and their fish life, which now threatens the food security of millions of people.

With more than 60 per cent of the world’s reefs under immediate threat from human activity, the researchers argue that efforts to identify and protect reefs lying 30-150 metres below the surface should be stepped up, so as to provide a secure refuge for fish and corals that can also live on deeper reefs.

These deeper reefs are relatively insulated from global warming and other direct human pressures for the time being – but there are signs that overfishing, pollution and other forms of degradation are now starting to affect them too, making their protection urgent, they warn.

“In China, coastal development and overfishing has destroyed 80% of coral cover in just the past 30 years. In Australia, coral cover on coastal reefs is also plummeting and the World Heritage Listing of the Great Barrier Reef (GBR) is now under review.”

Many reef species which inhabit shallow waters are also to be found on reefs at depths of 30 metres or more, amid lower light conditions. This makes these deep reefs a potential refuge for both corals and other sea life when shallow reefs are degraded.

However, worldwide there is only a patchy record of where these deeper reefs are located, making their protection problematic.

“The area of these deep reefs may in fact be quite large. On the GBR recent surveys have revealed up to 20,000 square kilometres of deep reef – equal in size to the combined area of all the shallow reefs,” Dr. Bridge says.

“While many species inhabit both shallow and deeper waters, the extent to which this occurs is as yet poorly understood. However they may form an important source of replenishment for shallow reefs and their fish stocks, given the destruction that is occurring on these reefs themselves and in the surrounding mangroves and sea-grass beds which are a nursery for juvenile fish.”

At present very few of these deeper reef systems receive any form of protection around the world because reef management – where it exists – tends to focus on shallow reefs, the scientists say. Mid-level and deeper reefs are not generally included in Marine Protected Areas – an oversight that needs to be amended.

“Adopting a broader ecosystem-scale approach that incorporates deep reefs around the world would have multiple and long-term social and economic benefits.

The economic and conservation value of deeper reefs renders them worthy of protection in their own right, and safeguarding these habitats will also extend ongoing efforts in shallow water to protect reef species across their entire depth range.”

AquaIllumination Officially Pulls the Curtain Off Their New Hydra