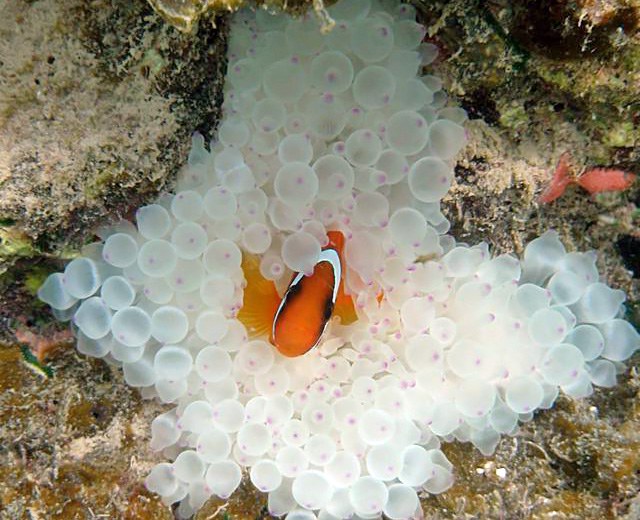 Round the planet the loveable clownfish Nemo may be losing his home, a new scientific study has revealed.

Research by an international team of marine scientists has found that sea anemones, which provide shelter for clownfish and 27 other fish species, are facing the same worldwide threat as coral reefs – bleaching and loss due to rising water temperatures.

“Our study showed that at least seven of the ten anemone species suffer from bleaching when water temperatures get too high,” says Dr Ashley Frisch of the ARC Centre of Excellence for Coral Reef Studies at James Cook University, a co-author of the report which has highlighted a potential crisis for two of the world’s most popular marine species.

“Importantly, we found bleaching of anemones occurring wherever we looked – from the Red Sea and Indian Ocean to the Indo-Australian region and the Pacific. Sometimes it was on a massive scale.”

The bleaching appears to be due to the same cause as coral bleaching – loss of the anemone’s symbiotic algae, which supply an important part of its nourishment. This happens when the surrounding water becomes too warm.

But it also involves the loss of the brightly coloured fishes which the anemone protects – and which in turn protect it. The result is a collapse in the delicate three-way partnership between algae, anemone and fish.

“Anemones are naturally tough and live for many years.  As a result their rates of reproduction are slow – and when they are hit by a killer bleaching event, it can result in their complete loss from an area over a period of time. It appears they cannot reproduce fast enough to make good the loss, especially if the fish are also gone,” Dr Frisch explains.

“Bleaching causes the loss of anemonefish, like nemos, which have nowhere to hide and without the anemones to protect them are quickly gobbled up by predators.

“Also, because the fish appear to perform useful services for the anemone like protecting them from grazing fish, it may also be that the loss of anemonefishes following a bleaching event means the anemones themselves are much less likely to recover.”

The researchers, from Australia, Saudi Arabia and the USA surveyed nearly 14000 anemones worldwide and found 4 per cent were bleached.  However bleaching rates ranged from 20-100 per cent, following five major bleaching episodes.

They conclude that in some areas, anemone “population viability will be severely compromised if anemones and their symbionts cannot acclimat(is)e or adapt to rising sea temperatures.

“Anemone bleaching also has negative effects to other species… including reductions in abundance and reproductive output of anemonefishes.

“Therefore, the future of these iconic and commercially valuable coral reef fishes is inextricably linked to the ability of host anemones to cope with rising sea temperatures associated with climate change.”

The study concludes “If host anemones (and their symbiotic algae) cannot acclimate or adapt to rising sea temperatures, then populations of host anemones and associated anemonefishes are anticipated to decline significantly.”

Dr Frisch says that apart from their roles in coral ecosystems, anemones and their fish are of economic importance to both tourism and the aquarium trade, and many poor coastal communities depend on the income they bring.

The Coral Reef Aquarium by Tony Vargas is sold out