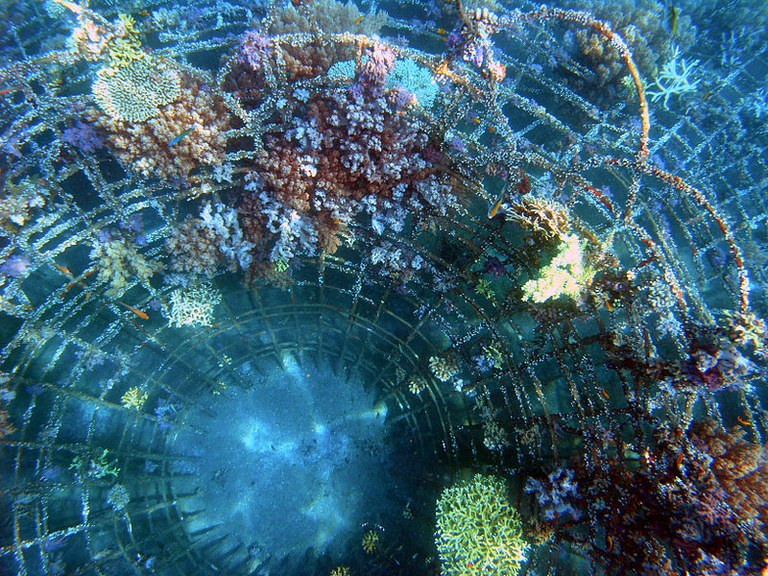 
Who says a little stray current is all bad?

In 1979, Prof. Wolf Hilbertz developed and patented the Biorock process.  Hilbertz discovered that by passing electrical current through seawater, the water would electrolyze and quickly form aragonite (upwards of 5cm thick per year) on the metal cathode.  Using his discovery of “underwater mineral accretion,” he developed the process of charging submerged metal structure (often made of rebar, wire mesh, or a combination thereof) with low voltage electricity in order to create an artificial structure with high surface area of stronger-than-concrete calcium carbonate substrate.

Instead of moving massive concrete structures to restore reefs, why not let nature (with the help of a little electricity) do its own thing using easier-to-transport metal lattice?

Divers then attach corals to the new aragonite-coated frames and thus a new artificial reef is born.  The corals have been documented to grow at an accelerated rate of three to five times, so it’s not long before the artificial metal frame begins to take the form of a natural coral reef.  Corals not only grow faster on these electrified artificial reefs; Scientists have also discovered corals on Biorock also fare better against warm climate events and environmental pollution than their natural counterparts!

One look at the success of the Pemuteran Artificial Reef Project is testament enough for the Biorock technology.  They shared this beautiful video of some amazing reborn reefs.  Visit their website to read more about the project (it’s a good, short read).