Mind Trick Montipora is the Latest Coral from ORA 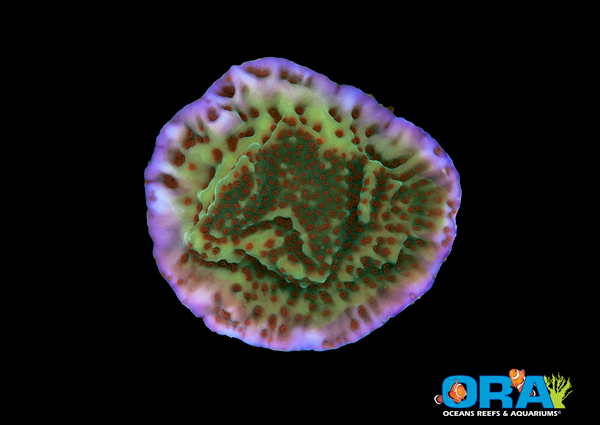 Oceans Reefs & Aquariums have another brand new coral frag to boast, and it’s the beaufitul ORA Mind Trick Montipora. This stunning monti, which is better known as the Jedi Mind Trick, has been in the hobby for quite some time, developing an extensive following and spreading through the tanks of hobbyists and retailers with a Jedi-like quickness. It sports a green body with red polyps and a very distinguishable purple growing edge, which is what really sets the coral apart. The ORA Mind Trick is primarily an encrusting Montipora that will eventually take on a more plate like appearance if it reaches a rock ledge. It does well under a variety of light intensities, but colors up best with plenty of blues to help that purple growing edge pop. ORA first acquired a single frag of this coral from a local hobbyist back in 2009. They have grown it out in their greenhouse, obviously reaching enough frags to be able to send them out en masse to fish stores across the US. As far as the name goes, ORA has to be very careful with particular coral names due to all of the legal hurdles associated with intellectual property and trademarking. Because the term “Jedi” is a product of George Lucas and likely owned by Disney, ORA couldn’t exactly use it in their commercially available product, at least not without having to pay royalties deal with some other repercussions. So, the coral was renamed to the ORA Mind Trick Monti, which we doubt anyone (at least on the hobby side) will fuss too much about MORE: Mind Trick Montipora is the Latest Coral from ORA