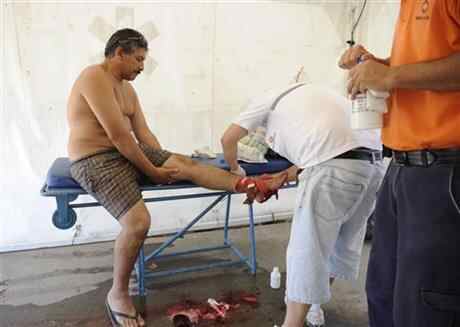 A man is treated after he was bit by a palometa, a type of piranha, while wading in the Parana River in Rosario, Argentina, Wednesday, Dec. 25, 2013. (AP Photo/La Capital, Silvina Salinas)

An attack by a school of carnivorous fish has injured 70 people bathing in an Argentine river, including seven children who lost parts of their fingers or toes.  A seven-year-old girl had her finger partially amputated and dozens more suffered bite wounds on their extremities from the fish, a relative of the piranha called “palometas,” said Federico Cornier, the director of emergency services in the city of Rosario. The attack happened off the popular beaches of the Parana River near Rosario, 300 kilometers (186 miles) north of Buenos Aires, where many Argentines were seeking relief from a heat wave over the holiday.

Director of lifeguards Federico Cornier said Thursday that thousands of bathers were cooling off from 100-degree temperatures in the Parana River in Rosario on Wednesday when bathers suddenly began complaining of bite marks on their hands and feet. He blamed the attack on palometas, “a type of piranha, big, voracious and with sharp teeth that can really bite.” 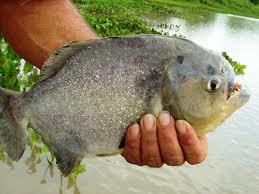 Paramedic Alberto Manino said some children he treated lost entire digits. He told the Todo Noticias channel that city beaches were closed, but it was so hot that within a half-hour, many people went back to the water.