Staff at the Sea Life London Aquarium were having trouble getting one of their fish to eat. 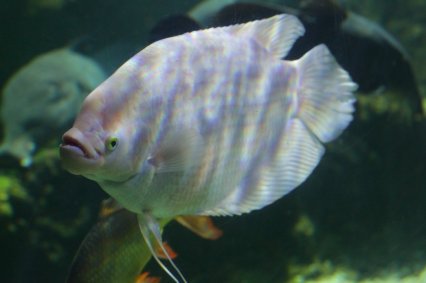 Gerty the Gourami in his tank at the London Aquarium

Gerty the Gourami had recently come to the aquarium from a private owner, and the staff were baffled as to why the large fish would not eat. When the staff contacted the previous owner, it turned out he was feeding the Gourami a diet consisting of a popular British snack food, prawn flavored potato chips. It also explained why Gerty was pink, while Gourami’s are usually grey in color. Curator of the Sea Life London Aquarium, Jamie Oliver said: “Gouramis usually eat a diet of fruit and vegetation but fortunately Gerty doesn’t appear to have suffered any ill effects from her unhealthy addiction. The staff was able to get Gerty to eat grapes and bananas,with no chips allowed. MORE