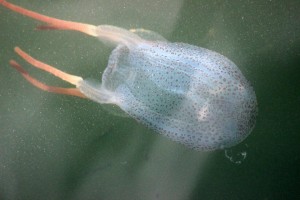 Somewhere in the Manasquan River, which flows along Gull Island in Point Pleasant Beach, New Jersey, lurks a potently venomous little jelly, the Tamoya haplonema jellyfish, aka the “Box Jellyfish” or “Sea Wasp”. Now, I hate all stinging insects so automatically all I can think is “NOPE”, especially so close to my home turf. The 6-8 inch cnidarian was photographed earlier this week and posted on the Barnegat Bay Island Facebook page, where the odd-looking creature was eventually identified as Tamoya haplonema. Sporting a translucent blue-gray bell and streaming orange tentacles, the jelly is actually lovely. Fun fact: The Box Jellyfish is the only known jellyfish to have visual ability, with multiple eyes dotted throughout its bell. Each eye measures a minute 0.1 millimeters across, and is comprised of a sophisticated lens, retina, iris, and cornea. How they actual process images is a mystery, as they lack a central nervous system. Horrifying fact: The Box Jellyfish was responsible for over 5,000 human deaths between 1954 and 1996. Yea, I’ll be skipping the beach for a bit. This particular jelly is ordinarily a bottom-dweller, but is known to come to the surface with the intention of releasing eggs and sperm. They’re most densely populated around the coast of Brazil. All that being said, the jellies are EXTREMELY dangerous, so swimming in the area is ill-advised. If you want to take that gamble, and happen to get stung, immediate first-aid is crucial. Clean the area around the sting with a towel or gloved hand to ensure the victim’s skin is clear of stinging nematocysts. Follow up with a trip to the nearest hospital where they’ll most likely fork over some hefty painkillers. See one washed up on the beach? Approach with caution – these guys still pack a deadly punch even after their demise. Swim safe out there, or just not at all! Follow this link for more information as well as some video of the deadly cnidarian in action. 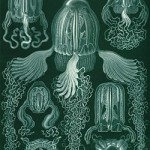 Do Good and Volunteer While You Take in the Beauty of Phuket, Phuket, Thailand