Proposed New Aquarium To Replace One Destroyed By Hurricane Katrina 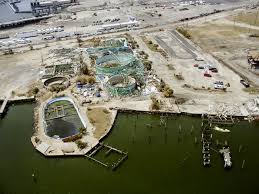 Hurricane Katrina happened almost 10 years ago and was one of the worst natural disasters the United States has ever seen. Katrina destroyed many peoples homes and businesses, all along the Mississippi and Louisiana Coasts. The city of Gulfport lost the Marine Life Aquarium to the hurricane in 2005. Gulfport is trying to welcome a new aquarium that is estimated to cost over $100 million dollars and to hopes to be one of the 10 largest aquariums in the United States. The location for the aquarium has not yet been disclosed, but sources say it has been in the works for months. Its exciting to see the City renovating and getting back on its feet after the devastation of Hurricane Katrina, even all these years later. While the aquarium is still in the works, fingers crossed that we have a fantastic new aquarium in the future of Mississippi. MORE