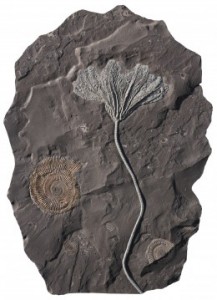 Throughout geological time, there have been many shifts in marine animal species. Amongst these shifts is a transition known as the Mesozoic Marine Revolution. This evolutionary phenomenon not only overturned a number of bottom-dwelling marine species, it transformed the appearance of the ocean floor.

Roughly 252 million years ago – the start of the Mesozoic Era, the ocean floor was littered with immobile invertebrate species. These species included stalked crinoids, molluscs, brachiopods, and other large, stationary marine invertebrates that rested along the ocean floor.

Soon after the Mesozoic Era began, many predators such as sharks and ichthyosaurs came onto the scene. These predators were considered “durophagous” – shell crushing, and used their strength to exploit these immobile, bottom-dwelling invertebrates.

This caused a strong evolutionary shift: stalked crinoids lost their stalks and became mobile while molluscs and brachiopods began to bury themselves in the sediment rather than remain defenseless and exposed. These evolutionary adaptations paved way for a seemingly emptier, more modern ocean floor.